Columbia, MD--July 28, 2021.  According to a recent study, scientists have found that wildfire-generated thunderstorms, known as pyrocumulonimbus (pyroCb) are even more damaging than previously thought. Lightning from these massive fire-triggered thunderstorms can not only spark additional blazes far away but they can also send plumes of smoke and aerosols into the stratosphere. 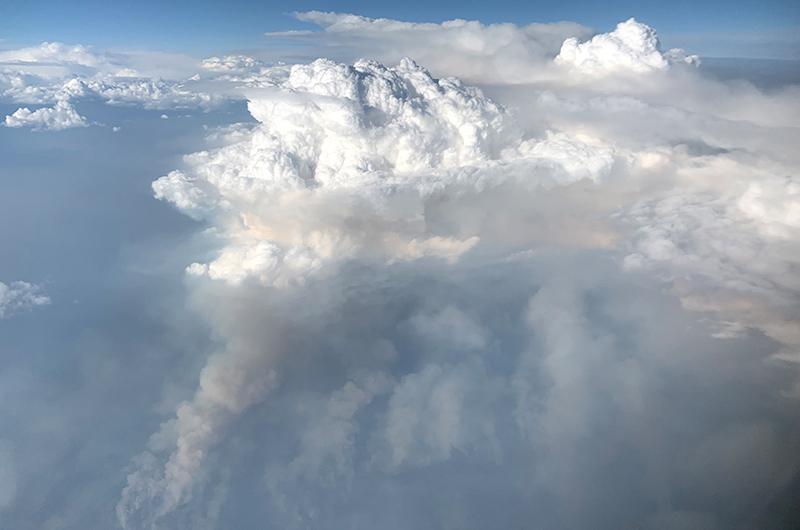 The findings were recently published in the journal, Nature. Universities Space Research Association’s Ghassan Taha, a coauthor on the paper, and David Peterson, the lead author from the Naval Research Lab and his colleagues were invited to publish their findings in the journal.

The authors analyzed the Australian Wildfire Event, which was part of Australia’s extreme Black Summer and featured many catastrophic bushfires that scorched a record 7.4 million hectares of land and which revealed the potential for increasingly extreme stratospheric smoke events.

According to Taha, who is a Principal Investigator of the NASA-funded aerosol retrieval algorithm Ozone Mapping and Profiler Suite (OMPS) limb profiler (LP) instrument, “The stratospheric aerosol layer is mostly dominated by natural sources such as volcanic eruptions that directly inject aerosols into the stratosphere. Once in the stratosphere, the aerosols’ lifetime can extend from months to years. PyroCb, the most vigorous form of biomass burning, can directly inject smoke aerosol into the stratosphere in amounts comparable to volcanic eruptions.” And the plumes can go as high as 12-13 km. In the case of the Australian fire, the ensuing smoke plumes reached extraordinary altitudes between 20-35 km and the aerosols lasted more than 15 months in the atmosphere.

Using the OMPS LP instrument, Taha and his team obtained unique data for this study. They showed that the unprecedented, multi-day pyroCb Event in Australia injected massive amounts of aerosol into the lower stratosphere, rivaling those from volcanic injections. In addition, OMPS LP stratospheric aerosol optical depth (sAOD) 10-year records revealed that the highest levels of aerosols seen during the last decade were observed during 2019-2020, with the Australian fires playing a significant role in reaching that milestone. It also showed that two of the four largest stratospheric plumes observed since 2012 that were primarily originated from regional outbreaks of intense pyroCb activity.

The stratospheric pyroCb events in the last four years including the Australian super outbreak, and the Canadian British Columbia event in 2017 offer new clues on the potential scale and intensity of this increasingly extreme fire-weather phenomenon in a warming climate.

The scientific in-depth investigation of pyroCbs is relatively recent, and since it is possible that their occurrence is increasing worldwide, more research is required on these events. The two big events in Western Canada and in Australia caught the attention of meteorologists and other Earth scientists. Such events appear to occur more frequently, in closer proximity, and sometimes in clusters. The specific mechanism causing them is not well understood, and more studies in the future will be needed including predictive capabilities, real-time monitoring, and mitigating their impact on the community where these events occur.

ABOUT USRA
Founded in 1969, under the auspices of the National Academy of Sciences at the request of the U.S. Government, the Universities Space Research Association (USRA) is a nonprofit corporation chartered to advance space-related science, technology, and engineering. USRA operates scientific institutes and facilities,and conducts other major research and educational programs. USRA engages the university community and employs in-house scientific leadership, innovative research and development, and project management expertise. More information about USRA is available at www.usra.edu.