The remarkable work of the Science Visualization Team 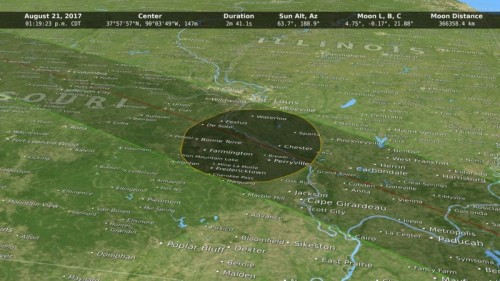 On August 21, 2017, millions of people across the United States will see a wondrous spectacle visible for the first time in 38 years in the contiguous United States— a total eclipse of the Sun.

To prepare the public for this event, Universities Space Research Association’s Ernie Wright, the Lead  Scientific Visualizer, Ernie Wright is helping NASA by mapping the path of the Moon's shadow in a way that's never been seen before.

Using Hollywood animation software to showcase the scientific data returned by NASA missions, Wright and his colleagues have developed very exciting videos that explain complex materials in an engaging and comprehensible manner. https://svs.gsfc.nasa.gov/12117

But this involves a great deal of behind-the-scenes work. The eclipse visualizations incorporate global elevation maps from the Lunar Reconnaissance Orbiter spacecraft, in orbit around the Moon since 2009. They also incorporate Earth elevations measured by a radar flown on the Space Shuttle, Earth imagery from satellites, and tables of lunar and solar positions, called ephemerides, calculated by NASA’s Jet Propulsion Laboratory.

Additionally, this scientific visualization involves calculating the circumstances of the eclipse. To calculate these, Wright used essentially the same mathematical tools that have been in use since the 19th century, then refined the results using the best modern data describing the shapes of the Moon and the Earth. The shapes of both bodies affect the location and timing of totality in sometimes surprising ways.

The calculations start by dividing the U.S. into a grid of over 100 million points. The program then asks what an observer would see at each of these points, building up an image of the Moon's shadow on the ground. This process is repeated at 6000 time steps. The result is an animation that shows the movement of the shadow overthe uneven terrain of the earth.

Ernie's videos are available at https://svs.gsfc.nasa.gov/Gallery/suneclipse2017.html.