Houston, TX and Columbia, MD — June 11, 2021. NASA recently announced the selection of Goddard Space Flight Center’s DAVINCI (Deep Atmosphere Venus Investigation of Noble gases, Chemistry, and Imaging) mission as part of its Discovery Program. Universities Space Research Association’s (USRA’s) Drs. Justin Filiberto and Walter Kiefer at the Lunar and Planetary Institute (LPI) are science co-investigators on the team that will analyze Venus' atmosphere to understand how it formed, evolved, and determine whether Venus ever had an ocean. 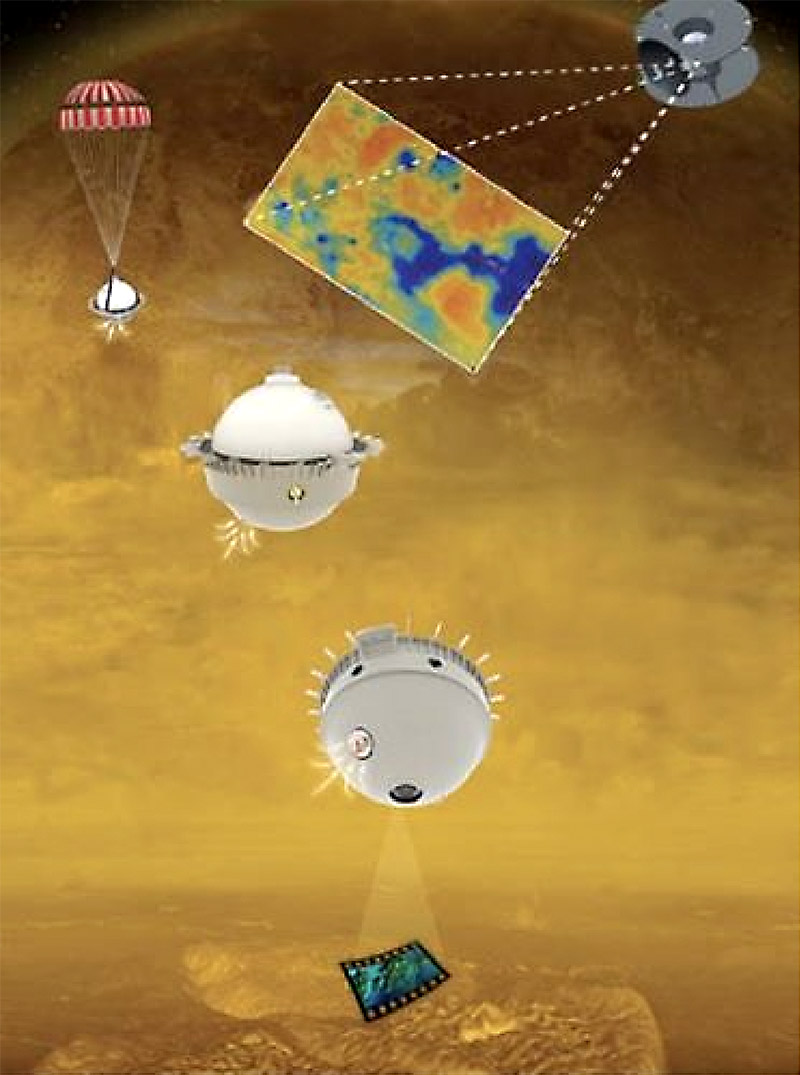 DAVINCI consists of both an atmospheric entry probe and an orbiter. The entry probe (left side of image) measures the chemical and isotopic composition of the Venus atmosphere and obtains imagery of the Alpha Regio landing site. The orbiter (upper right) observes the atmosphere and surface of Venus at infrared and ultraviolet wavelengths. Credit: NASA Goddard Space Flight Center.

Scientists think that in an earlier time, Venus may have been more like Earth, a world with water oceans that was potentially habitable for life, perhaps for billions of years. They hypothesize something caused a “runaway greenhouse” effect in Venus’ atmosphere, cranking up the temperature and vaporizing its oceans. NASA’s DAVINCI mission is set to explore Venus to determine if it was habitable and understand how these similar worlds ended up with such different fates.

“A return to Venus is long overdue as we try to answer the question of why are Earth and Venus — often described as twins in size and composition — so different today?” says Dr. Lisa Gaddis, Director of the LPI. “The LPI is very pleased and proud to be part of this adventure with the DAVINCI team as they address this and many other questions about how the extremely hot, arid and acidic environment on Venus came to be.”

The science impact of DAVINCI will reach even beyond the solar system to Venus-like planets orbiting other stars (exoplanets), which are expected to be common and will represent important targets for NASA’s upcoming James Webb Space Telescope. But these planets may be difficult to interpret, especially if they are enveloped in thick Venus-like clouds.

The mission will consist of a carrier spacecraft and a probe. The carrier spacecraft will track motions of the clouds and map surface composition by measuring heat emission from Venus’ surface that escapes to space through the massive atmosphere. The probe will descend through the atmosphere, sampling its chemistry as well as the temperature, pressure, and winds. The probe will also take the first high-resolution images of Alpha Regio, an ancient highland twice the size of Texas with rugged mountains, looking for evidence that past crustal water influenced surface materials.

“DAVINCI will make detailed measurements of the chemistry of the atmosphere of Venus, revealing key features of its evolution for the first time,” says Walter Kiefer, a planetary geophysicist at the LPI and a member of DAVINCI science team. “These observations will tell us about the origin of the atmosphere, whether or not Venus had an ocean early in its history, and how the rate of volcanic activity has varied with time."

Launch is targeted for 2029 with two flybys of Venus prior to the probe’s descent into and through thick clouds of Venus atmosphere. The flybys are the initial phase of the remote-sensing mission to study the atmospheric circulation and map the surface composition. Approximately two years later, the probe will be released to conduct its investigation of the atmosphere during a descent that will last about an hour, and take hundreds of measurements, before landing at Alpha Regio.

“The Alpha Region landing site is one of the oldest and most geologically complex regions of Venus, similar to continents on Earth,” says Justin Filiberto, a planetary geologist, and another member of the science team, at the LPI. “DAVINCI will provide the highest resolution imaging ever obtained for Venus, which will reveal the rock composition, the surface weathering environment, and the tectonic processes that shaped this part of Venus.”

The probe will contain four instruments. Two of them – the Venus Mass Spectrometer (VMS) and the Venus Tunable Laser Spectrometer (VTLS) – will undertake the first complete compositional study of the entire cross-section of Venus’ atmospheric gases, searching for clues as to how, when, and why Venus’ climate may have changed so dramatically. The third instrument, the Venus Atmospheric Structure Investigation (VASI), will measure the pressure, temperature, and winds from about 43.5 miles (70 kilometers) in altitude to the surface at 10 times higher resolution (or more) than any previous Venus probe. After the probe drops under the thick cloud layer, the Venus Descent Imager (VenDI) instrument will take hundreds of near-infrared images of the Alpha Regio highlands, which the team will use to make maps of topography and composition. These images will show landscapes unique to Venus at the high resolutions typical of landers (near the surface). The probe also carries a student collaboration experiment, Venus Oxygen Fugacity (VfOx), which will measure the abundance of molecular oxygen in the atmosphere.

The carrier spacecraft will have one instrument, a suite of four cameras called VISOR (Venus Imaging System from Orbit for Reconnaissance). One camera will be sensitive to ultraviolet light to track cloud motions in the atmosphere. Additionally, a suite of three cameras sensitive to near-infrared light will be able to identify surface composition at regional scales by analyzing near-infrared heat emission from the surface when the spacecraft is over the night side of Venus. Since rock composition can be influenced by water, these images will give clues to how ancient oceans may have shaped the crust of Venus. The camera suite will provide the first compositional maps of Ishtar Terra, the high latitude “continent” on Venus with a range in height of up to 6.8 miles (11 kilometers). Ishtar may be the last manifestation of a kind of plate tectonics on Venus that shut off when the oceans dissipated about one billion years ago. The carrier spacecraft also carries a technology demonstration experiment, the Compact Ultraviolet to Visible Imaging Spectrometer (CUVIS), which will measure the radiation balance, physical properties, and composition of the Venus clouds.

James Garvin of NASA Goddard is the principal investigator. Goddard will perform project management and project systems engineering for the mission.