Columbia, MD—February 18, 2020. After six months, more than 300 million miles and seven precarious minutes, NASA’s Mars 2020 spacecraft and the Perseverance rover will have landed on Mars. And USRA scientists are part of a team supporting this ambitious endeavor. 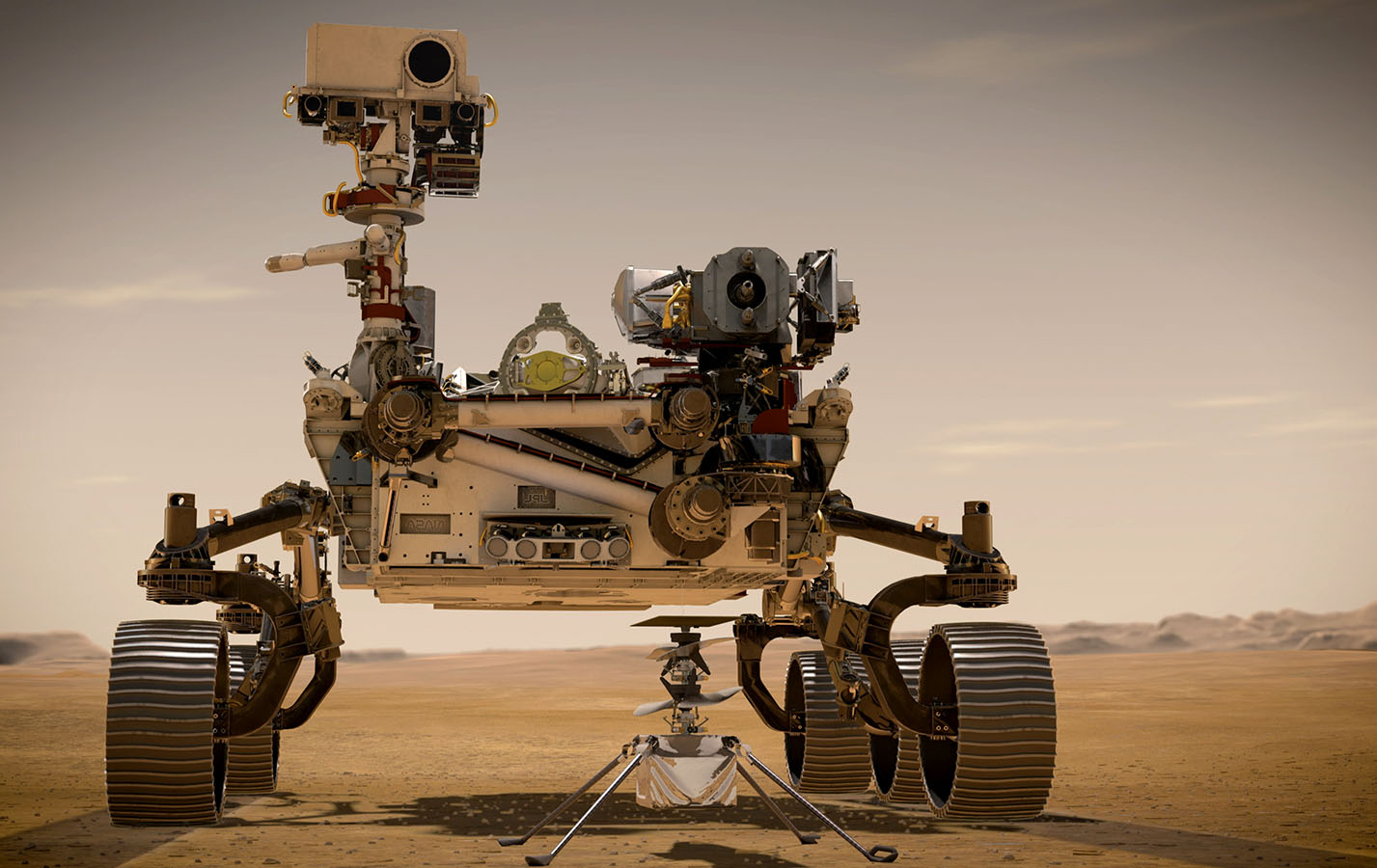 Perseverance will explore an intriguing area of Mars in and around Jezero Crater—created by an ancient asteroid impact. It  will be searching for signs of ancient microbial life and collect samples of Martian rocks and sediment for future return to Earth.

The geology of Jezero shows that it was once a lake filled with liquid water. The points where the rivers flowed into Jezero left deposits of sand and mud, and scientists have evidence that there is a channel where water flowed out of the lake. The delta, the lake bottom and the lake’s shorelines all had an environment that could have supported ancient microbial life.

Mars 2020 will be the first Mars mission to collect approximately 35 samples of drilled cores of rock and soil. Each drill core will be deposited into a hermetically sealed sterile tube. These tubes will be dropped onto Mars’ surface at select locations for eventual retrieval and return to Earth. The samples might be retrieved and returned to Earth on follow-on missions, likely in the next decade, and analyzed in the most advanced laboratories to search for evidence of ancient microbial life on Mars. 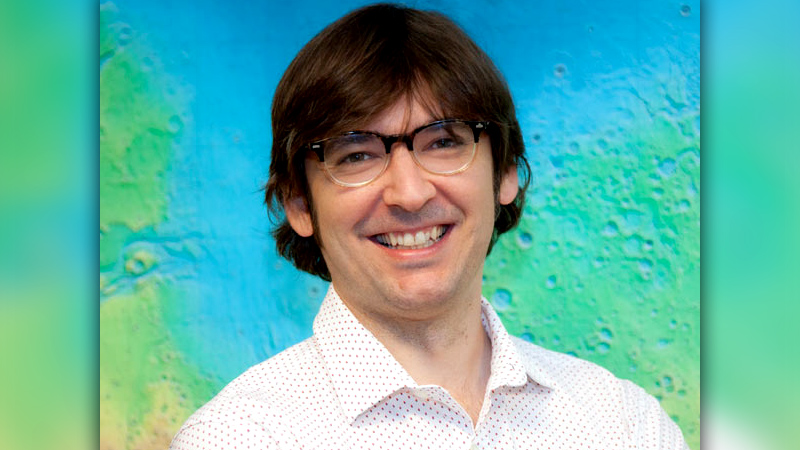 Dr. Martinez is a Co-Investigator for the Mars Environmental Dynamics Analyzer (MEDA) which is a set of sensors that will provide measurements of temperature, wind speed and direction, pressure, relative humidity, and dust size and shape. The principal Investigator is Jose Rodriguez-Manfredi, Centro de Astrobiologia, Instituto Nacional de Tecnica Aeroespacial, Spain. Dr. Allan Trieman is a Co-Investigator for the Planetary Instrument for Xray Lithochemistry (PIXL) and the Principal investigator is Abigail Allwood, NASA's Jet Propulsion Laboratory, Pasadena, California.

Dr. Martinez and his colleagues focus on MEDA which is the weather station onboard Perseverance. It includes six instruments with a twofold objective: (1) to assess the effect of airborne dust on the operation of surface systems and human health by characterizing the size and morphology of dust, and (2) to improve predictability of forecasting models by measuring surface weather conditions around the clock. Both objectives are intimately related to future human exploration of the Red Planet. One of MEDA’s instrument is the Thermal Infrared Sensor (TIRS), the first in-situ Martian infrared (IR) radiometer including upward- and downward-looking channels. TIRS will measure the downward and upward long wave (LW) thermal IR radiation at the surface, the reflected short wave (SW) solar radiation at the surface, the surface brightness temperature, and the air temperature at ~40 m altitude. TIRS will allow the first in-situ quantification of the surface energy budget on Mars. This is key in preparation for the human exploration of Mars because it contributes to improvements in the predictive capabilities of numerical models. TIRS measurements will allow the determination of key geophysical properties of the terrain. 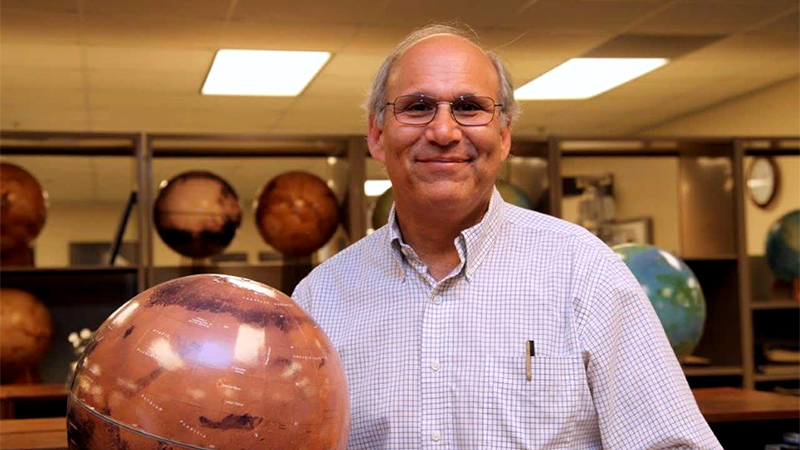 As Co-investigator, Dr. Treiman is supporting the team on the Planetary Instrument for X-ray Lithochemistry (PIXL) onboard Perseverance. PIXL is an X-ray fluorescence spectrometer, designed to measure abundances of chemical elements in rocks at sub-mm, and producing maps of the element abundances. To make the maps, PIXL produces a beam of X-rays and focuses it into a ~100 micrometer spot on the target rock or soil, and then collects and analyzes X-rays fluoresced from the targets. To support these X-ray images, PIXL has a 4-color camera that will image and document the sites. These maps of element abundances will help determine which rocks are the best candidates for return to Earth, and which textures and minerals could indicate signs of ancient microbial life.

The types of data PIXL will collect from rocks in Jezero Crater on Mars are the same that Dr. Treiman has been collecting from Mars meteorites found on Earth his entire career. He will apply his work on Mars meteorites (and other rocks) directly to the PIXL data to help understand how the Jezero Crater rocks formed, and what they mean for the larger questions of Mars' history and potential for life.

NASA’s Mars 2020 Perseverance has the most sophisticated payload ever sent to the surface of another planet. Along with 23 cameras, Perseverance carries a small helicopter in her belly named Ingenuity, which aims to be the first robotic flight on Mars. This helicopter will test a new capability (flying on Mars) for the first time, opening doors for future flying vehicles capable of accessing terrains difficult to reach by rovers and providing reconnaissance for future human settlers.