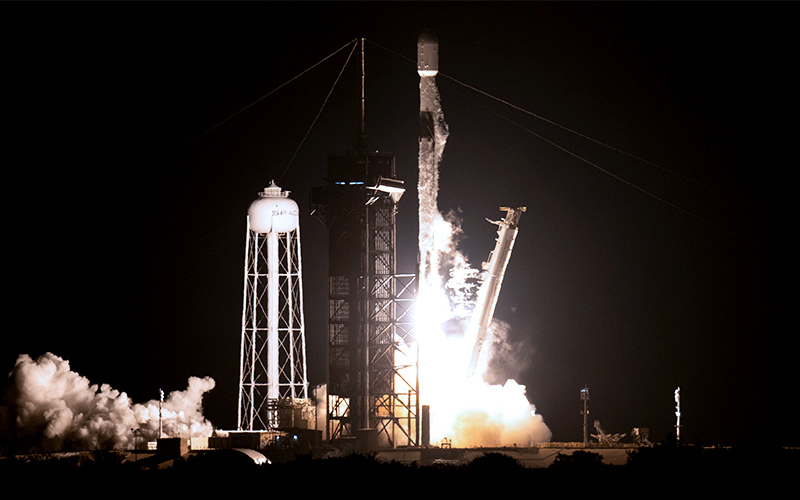 IXPE science will explore some of the most exotic, energetic, and violent environments in the universe – supernova remnants, supermassive black holes, and super-magnetized dead stars. Of its many scientific objectives, IXPE will probe particle acceleration in pulsar-wind nebulae, investigate the mechanism for X-ray production in pulsars, study the magnetic field configuration and magnitude of neutron stars, examine the geometry and emission mechanism of Active Galactic Nuclei, and even measure the spin of black holes.

IXPE is NASA’s first mission dedicated to measuring the polarization of X-rays. Normal light, from a star or a light bulb, is composed of electric and magnetic waves that oscillate at right angles to the path the light is traveling. These vibrations can be up-and-down, side-to-side, or anywhere between, but oscillations from polarized light are aligned in only one direction. Polarization measurements like those done by IXPE can probe unique details about where the light comes from and what it passes through, making IXPE the perfect complement to NASA’s Chandra X-ray Observatory.

Senior Computer Engineer William “Bill” H. Cleveland Jr. and Software Engineer Erick Verleye are part of team who designed and created the software used by the IXPE Science Operations Center. This software converts data from the IXPE spacecraft into a format that scientists use to analyze their target of interest.

Astronomy Scientist Oliver Roberts was responsible for some of the performance predictions studies of the IXPE mandrels, calibration studies of the thermal shield (necessary to keep the instrument at a regulated temperature), and provided work on the calibration of the X-ray sources used to verify flight hardware mirror assembly.

IXPE is composed of three telescopes each with 24 nested Nickel-Cobalt alloy, Wolter-I mirrors to focus X-rays over a range of 2-8 keV at grazing incidence. These X-rays are focused over a focal length of 4 meters to three gas pixel detectors (GPDs) to the focal point of each telescope. IXPE provides greater than 100 times improvement in the polarization sensitivity over OSO-8, the only other major payload (launched in the 1970s) to measure polarization of X-ray sources. To both fit within the original launch vehicle and provide the length required to focus the X-rays from the telescope onto the polarization detectors, IXPE utilizes a 4-meter extending boom that deployed successfully on December 15, 2021.

NASA Marshall manages the IXPE mission for the agency’s Science Mission Directorate as a project of the NASA’s Explorers Program. IXPE is an international collaboration between NASA, the Italian Space Agency, along with partners and providers in 12 other countries. Marshall built the three X-ray telescopes. The Italian Space Agency contributed IXPE’s polarization detectors. Ball Aerospace in Broomfield, Colorado, provided the spacecraft and manages spacecraft operations at the University of Colorado Boulder’s Laboratory for Atmospheric and Space Physics. NASA's Goddard Space Flight Center in Greenbelt, Maryland, manages the Explorers Program.

Commissioning of IXPE will take place during January 2022.

Further details on the IXPE mission can be found at https://ixpe.msfc.nasa.gov/index.html.

Founded in 1969, under the auspices of the National Academy of Sciences at the request of the U.S. Government, the Universities Space Research Association (USRA), is a nonprofit corporation chartered to advance space-related science, technology and engineering. USRA operates scientific institutes and facilities, and conducts other major research and educational programs. USRA engages the university community and employs in-house scientific leadership, innovative research and development, and project management expertise. More information about USRA is available at www.usra.edu.