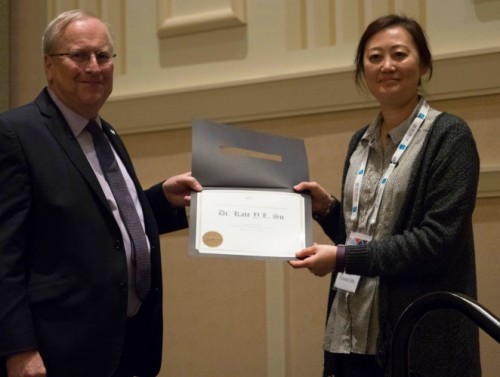 Kate Su, of the University of Arizona, was recognized for the best SOFIA-based research publication for her research detailing that a nearby planetary system is similar to our own. Her research distinguished between two theoretical models of the location of warm debris around the star Epsilon Eridani (Eps Eri) confirming the existence of an asteroid belt adjacent to the orbit of a Jupiter-sized planet. The similarity of the structure of the Eps Eri system to our solar system is remarkable, because Eps Eri is much younger than our sun.

Ryan Lau, of the California Institute of Technology, won the award for the best Ph.D. thesis for his research on the ring of dust and gas around the supermassive black hole at the center of the Milky Way Galaxy, called the Circumnuclear Ring (CNR). His research produced the highest-resolution mid-infrared images of the CNR, revealing material falling from the ring toward the black hole. 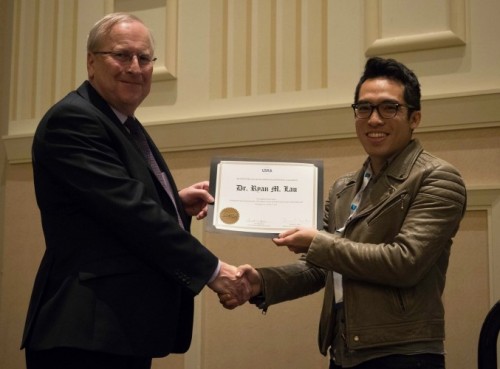 “As SOFIA expands its observations of the cosmic universe at mid- and far-infrared wavelengths, the observatory is enabling research like Su’s and Lau’s with our enhanced imaging and high-resolution spectroscopy capabilities,” said Harold “Hal” Yorke, director of USRA’s Science Mission Operations. “The observatory is adding to its suite of instruments with the recent addition of the High-resolution Airborne Wideband Camera-Plus (HAWC+), a far-infrared camera and imaging polarimeter, and researchers at Goddard Space Flight Center are now building the High Resolution Mid-Infrared Spectrometer, known as HIRMES. In addition, NASA will soon be releasing a call for proposals for a next-generation instrument to further enhance SOFIA’s capabilities and the science it will generate.”

There have been about 30 Ph.D. theses and 100 peer-reviewed scientific papers published from research conducted aboard SOFIA. The observatory has introduced a separate category of SOFIA observing proposals for thesis-enabling programs that provide significant and critical data for Ph.D. theses. SOFIA will begin its sixth cycle of scientific observations, from January 2018 through February 2019, which includes a two-month deployment to Christchurch, New Zealand, where researchers will study celestial objects best viewed in at southern latitudes.

SOFIA is a Boeing 747SP jetliner modified to carry a 100-inch diameter telescope. It is a joint project of NASA and the German Aerospace Center, DLR. NASA’s Ames Research Center in California’s Silicon Valley manages the SOFIA program, science and mission operations in cooperation with the Universities Space Research Association headquartered in Columbia, Maryland, and the German SOFIA Institute (DSI) at the University of Stuttgart. The aircraft is based at NASA’s Armstrong Flight Research Center's Hangar 703, in Palmdale, California.