USRA President and CEO, Jeff Isaacson, aboard SOFIA during its deployment in New Zealand

USRA President and CEO, Jeff Isaacson, aboard SOFIA during its deployment in New Zealand

NASA’s flying observatory, SOFIA, whose science operations are managed by Universities Space Research Association of Columbia, Maryland, is equipped with a 100-inch telescope inside a Boeing 747SP aircraft. Scientists onboard study the life cycle of stars, planets (including the atmospheres of Pluto and Jupiter), nearby planetary systems, galaxies, black holes and complex molecules in space. Very recently, Jeff Isaacson, President and CEO of Universities Space Research Association was in New Zealand aboard SOFIA.  The photo below shows him looking at the science targets for SOFIA. 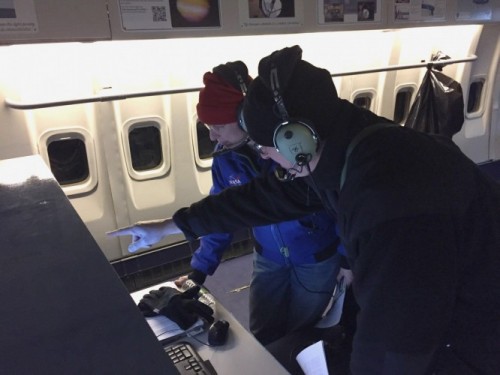 Based in California, SOFIA and its team return to the Southern Hemisphere every June to study objects that aren’t visible from the Northern Hemisphere and to take advantage of the long winter nights. The team operates from Christchurch, New Zealand, regularly between June and August and continues with more big plans for this year including observations of other galaxies.

Inside the Large Magellanic Cloud is Supernova 1987A, the closest supernova explosion witnessed in almost 400 years. The SOFIA team will conduct studies to better understand the material expanding out from it, which may become the building blocks of future stars and planets. Many of our telescopes have studied Supernova 1987A, including the Hubble Space Telescope, the Chandra X-ray Observatory and SOFIA’s predecessor, the Kuiper Airborne Observatory, but the instruments on SOFIA are the only tools we can use to study the debris around it at infrared wavelengths, to better understand characteristics of the dust that cannot be measured using other wavelengths of light.