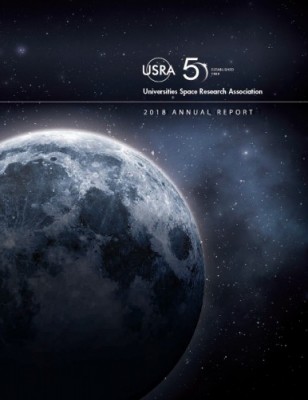 Columbia, MD-- February 8, 2019. USRA has released its Annual Report for Fiscal Year 2018, which marks the beginning of USRA’s 50th Anniversary. The report provides an overview of USRA activities and university engagement in science, technology development, and education during 2018. The report also provides financial highlights and information on USRA's governance. It is available for download.

USRA is a nonprofit corporation chartered to advance space-related science, technology and engineering. USRA was founded in 1969, under the auspices of the National Academy of Sciences at the request of the U.S. Government. USRA operates scientific institutes and facilities, and conducts other major research and educational programs, under Federal funding from NASA, the Air Force Research Laboratory, the Department of Energy, and other agencies. USRA engages the university community and employs in-house technical leadership and project management expertise. The governance of USRA is grounded in 110 major research universities.