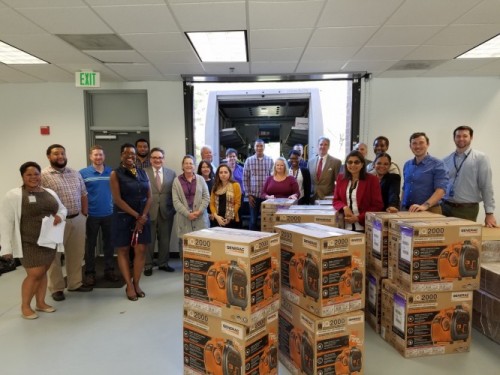 Columbia, Maryland—November 7, 2017. Universities Space Research Association, (USRA) one of the entities that manages Arecibo Observatory in Puerto Rico, today announced actions it has undertaken to support Observatory staff as they recover from hurricane Maria.

USRA donated from its corporate resources twenty 2000w portable generators to USRA staff who were in the greatest need for electricity at their homes. These generators were shipped from Columbia, MD to Puerto Rico.

USRA also set up a “gofundme” site for donations to help ALL staff at the Observatory. USRA collected approximately $40K and a committee was set up to evaluate applications and distribute the funds. It received 75 applications and ALL employees who were in need, irrespective of their employers, applied for these funds.

Jeff Isaacson, President and CEO, USRA, who was at Arecibo recently, stated, “I am proud of the staff at Arecibo Observatory who did everything in their power to prepare for the hurricane and then work diligently to recover from the damage and get basic operations at the Observatory back on line.”