Columbia, MD and Washington DC--July 15, 2019. Landslides are among the most pervasive hazards worldwide, causing thousands of deaths and billions of dollars in damage every year. But the exact number of landslides worldwide is unknown, and few publicly available inventories are able to robustly characterize these mass movements that occur on the side of hills and mountains.

In a study published in PLOS ONE on July 10, 2019, NASA scientists together with scientists from Universities Space Research Association (USRA) and Columbia University described a new source for increasing our knowledge of landslides around the world: citizen scientists. The Landslide Reporter project is the first and only landslide citizen science project that is global in scope. The idea is that if scientists can develop a better inventory of landslide occurrences, scientists can improve prediction models.

“We do not know the true distribution of where and when landslides happen," said Dalia Kirschbaum, a landslide expert at NASA's Goddard Space Flight Center. "By engaging citizen scientists in the process of finding and documenting these events, we hope to move the community closer to a global awareness of landslide occurrence and impacts.”

USRA’s Thomas Stanley who was involved in the planning process for Landslide Reporter, noted, "Citizen scientists can provide information otherwise impossible to obtain. Their local knowledge can improve the accuracy of the historical record, as well as describe places that academic scientists have never visited.”   He also tested the The Landslide Reporter, a web application that extends the Global Landslide Catalog by allowing citizens from around the world to submit information about landslides and trained interns in its use. In addition, he collaborated with other landslide researchers to merge their landslide databases into the Cooperative Open Online Landslide Repository (COOLR)--a publicly available inventory for the reporting and sharing of landslide data.

But the catalog is based primarily on information gathered from English language news reports. Since journalists tend to cover only large and deadly landslides in densely populated areas, many events never make it into the database. To fill in the gaps, Kirschbaum and her team created the Landslide Reporter where anyone can log in and report the time, location, date, size, cause, and photos of a landslide. 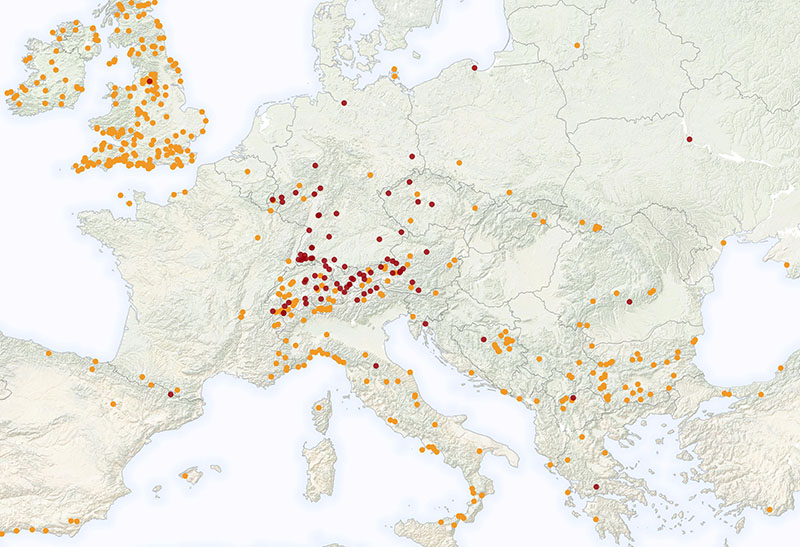 The map on the right shows citizen science reports compared to items being entered into NASA's Global Landslide Catalog. The red points show European landslides reported by citizen scientists since March 2018, while yellow points represent reports added to the news-driven Global Landslide Catalog since 2007. Citizen scientist data is more prevalent over hilly regions of Germany and the Alps, where landslide susceptibility is high but reports in English from the media are few.

According to the study, 49 citizen scientists contributed 162 landslide events in the first 13 months of the project. The data came from sources in 11 languages and from in-person observations.

"It is clear from the 162 data points that citizen scientists are filling in knowledge gaps that we had previously," said Caroline Juang, lead author of the paper and doctoral candidate in Earth and environmental science at Columbia University.

With data from the Landslide Reporter and the Global Landslide Catalog, COOLR is now the largest global landslide database and should significantly improve NASA's landslide hazard modeling capabilities. Past analysis by Kirschbaum and her colleague Thomas Stanley showed that landslides are likely to occur in areas that have previously experienced activity and have steep slopes, poorly consolidated soils, changes in land cover and heavy precipitation. Having more accurate accounts of such activity is one of the most important factors for assessing future impacts.