Columbia, MD—September 15, 2022.  Twisted magnetic fields around binary systems can reveal how the stellar system came together.

Circumbinary planets – planets that orbit around two stars, like the fictional Star Wars planet Tatooine and its two suns – exist in the Universe, and are sometimes referred to as Tatooine planets. Systems in which two stars rotate around each other, called binary star systems, are incredibly common, comprising over half the stars in the Milky Way. But how does a binary system like this happen? 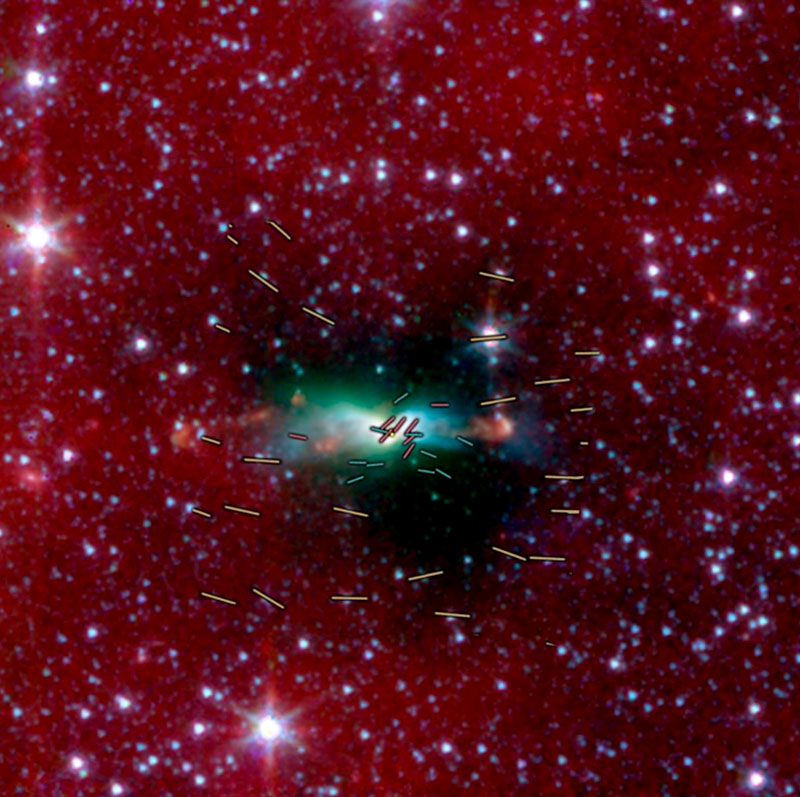 A subset of polarization vectors are overlain atop a Spitzer Space Telescope image of Lynds 483. The SOFIA data is shown in red, and orange the vectors were obtained by Pico dos Dias Observatory. The green vectors show data obtained by SHARC C-II Polarimeter at the Caltech Submillimeter Observatory in previous work, shown here as a comparison of scales. Near the center of the image is a small yellow dot indicating the location of the binary protostars. The combined fields show a twist as they approach the protostellar envelope, though they are parallel on larger scales. Credit: L483: NASA/JPL-Caltech/J. Tobin; Vectors: Cox et al. 2022, Chapman et al. 2013

Researchers using the Stratospheric Observatory for Infrared Astronomy, (SOFIA) observed, along with several other observations, a 45-degree twist in the magnetic field of protobinary system L483.

As stars begin to form, they obtain most of their material from a disk of dust and gas surrounding them. A larger envelope of matter surrounds and feeds the disk. From here, binaries can emerge in one of two ways – far apart, where they grow in the envelope, or much closer to one another, where they form in the disk.

There’s a caveat, though. Binaries that form in the envelope can move closer to each other over time, so even if they look near to one another now, they were not necessarily always that way.

“We think these protostars formed far away, migrated, and twisted up their field in the process of coming toward each other,” said Erin Cox, a postdoctoral associate at Northwestern University who led the study.

That’s where magnetic fields come in.

In the recent study, SOFIA observations – supported by data from the Atacama Large Millimeter Array (ALMA), the Pico dos Dias Observatory, and archival data from the Herschel Space Observatory – found the magnetic field in the star-forming cloud Lynds 483 (L483) is oriented east-to-west in its outer regions, but twists 45 degrees counter-clockwise toward its center. ALMA confirmed that L483 contains two protostars and Herschel provided information about some of the region’s physical properties, while SOFIA and Pico dos Dias traced the magnetic field shape.

Because stars and their planets form around the same time, figuring out how the protobinary came together tells astronomers about the types of planets it can harbor.

“If we understand how the protobinary stars formed, we will get a better understanding of how much stuff is in the disk, which is the material that provides the planets with their masses,” Cox said. “We want to understand what our starting mass budget is for these planets.”

For example, the protobinaries’ inward migration can enhance the motion of the gas and dust around them, ejecting them out of the system. If too much material gets blown out, only Earth-like rocky planets can potentially form, rather than gas giants, like Jupiter.

Being able to see these magnetic fields helps decipher the formation of binary systems and, in turn, their associated Tatooine planets.

SOFIA is a joint project of NASA and the German Space Agency at DLR. DLR provides the telescope, scheduled aircraft maintenance, and other support for the mission. NASA’s Ames Research Center in California’s Silicon Valley manages the SOFIA program, science, and mission operations in cooperation with the Universities Space Research Association, headquartered in Columbia, Maryland, and the German SOFIA Institute at the University of Stuttgart. The aircraft is maintained and operated by NASA’s Armstrong Flight Research Center Building 703, in Palmdale, California. SOFIA achieved full operational capability in 2014, and the mission will conclude no later than Sept. 30, 2022. SOFIA will continue its regular operations until then.