Columbia, MD—June 30, 2020. During the COVID-19 crisis, scientists found that Nitrogen dioxide pollution over China substantially decreased for a short period between 30 and 50 days.

To combat the spread of COVID-19, in January 2020, the Chinese government sealed off several cities reporting large numbers of infected people, including Wuhan, halting public transportation and closing local businesses. The efforts soon expanded nationwide, and the policy restrictions, applied at an unprecedented rate, impacted the environment and the economy.

In a paper recently published in Science Advances, the lead author, Fei Liu, from Universities Space Research Association at NASA Goddard Space Flight Center and her co-authors from a vast international and multi-institutional collaboration involving 15 scientists, examined these environmental and economic impacts of COVID-19 and the related policy responses in China during the lockdown period. 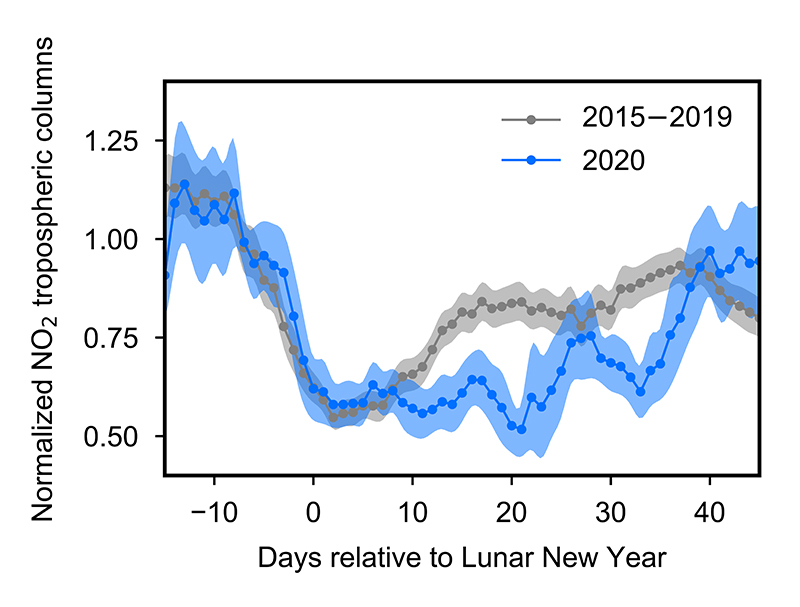 The research team first evaluated the reduction in nitrogen dioxide (NO2) measured in tropospheric vertical column density (TVCD) before, during, and after the Chinese Lunar New Year (LNY). Satellite measurements showed a 48% drop in NO2 TVCD from the 20 days averaged before the 2020 LNY (Jan 5-Jan 24) to the 20 days averaged after (Jan 25-Feb 13). These results reveal an approximately 20 percent larger rate of decline than that from previous non-COVID years.

Since NO2 is primarily emitted during fossil fuel consumption and is a well-established indicator of economic activity, declining NO2 levels are of interest to a wide range of academics and policy makers.

In the period immediately following the announcement of the first case of COVID-19 and prior to the government lockdown in China, the research team found that there was a substantial decrease in NO2, and during the lockdown that occurred 3.7 days (averaged) after the first reported case, there was an additional decrease. Based on the modeling data, the team found that both actions were associated with nearly the same magnitude of reductions.

These results show drastic reductions of NO2 TVCD during the LNY that are sustained for over a longer period in 2020 than in previous years. After taking into account the provinces’ fixed effects and seasonal variation, the researchers estimate that NO2 TVCD over China was reduced ~20% for one to two months.

Examining this unusual period has provided scientists a confirmation that a society that drives down fossil fuel consumption and reduces mobility will substantially reduce NO2 pollution, and these reductions have significant implications for both the environment and public health.

Science Advance’s site is at the following link: https://advances.sciencemag.org/lookup/doi/10.1126/sciadv.abc2992