The Synergy of Science and Art: USRA's Science Visualization Team's Role in the OSIRIS-REx Mission

The Synergy of Science and Art: USRA's Science Visualization Team's Role in the OSIRIS-REx Mission

Columbia, MD--January 20, 2021. USRA’s scientific visualization team represents an amazingly talented group that can create the most breathtaking images and 3-D models from data generated from NASA’ s science missions. Their most recent work related to the OSIRIS-REx mission is one example of an incredible depiction of the journey to Bennu and its daring attempt to touch the asteroid and return. This team developed detailed 3D models of Bennu and visualized the mission trajectory (path) of the OSIRIS-REx spacecraft during the various mission maneuvers while working in tandem with NASA’s visual communications at Goddard’s Office of Communications. 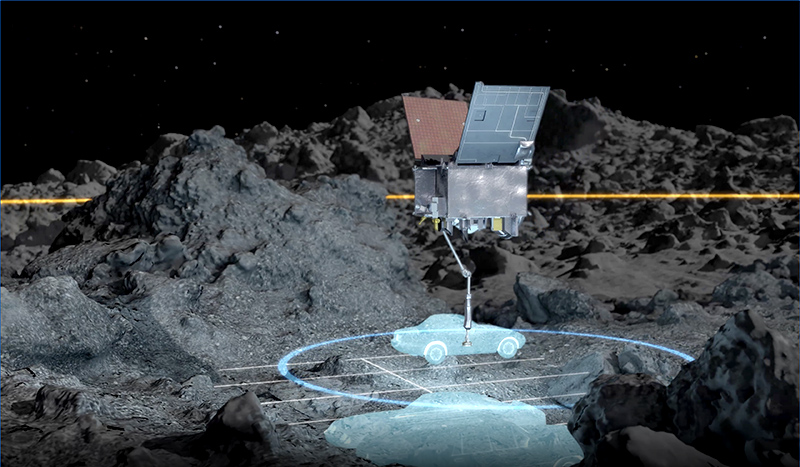 Surface-level view of OSIRIS-REx at sample site Nightingale, with a parking lot for comparison. Credit: NASA/Goddard/CI Lab/University of Arizona

The USRA team which includes data visualizers, animators, video producers and editors is scattered across three entities—the Science Visualization Studio, the Conceptual Image Lab, and Goddard Media studios. According to Kel Elkins, one of USRA’s data visualizers, “Most of our work is data-driven, meaning that some aspect of the visual is created using actual mission data. As data visualizers, this is our specialty. We can work with all sorts of scientific and technical data formats, which allows us to interface closely with mission scientists.” But this skill this is not without its challenges. Accessing, reading, and processing NASA mission and science data into formats that can be used in 3D modelling and animation production tools easily understood by the public is not an easy task.

Working directly with scientists to determine what types of data are available, these talented visualizers collaborate with the Goddard Media Studio producers and the Conceptual Image Lab artists to help with the overall storytelling aspect and to ensure that the visualization they produce fit into the larger communication goals of NASA. They write code to read and process the data into formats they can use in their software pipeline, which consists of many of the same software tools used by the motion picture industry to create special effects and animated films. They then experiment with different ways to visually represent the data in a way that both technical and general audiences can appreciate and understand.

In the case of the OSIRIS-REx spacecraft, members of this group created several visualizations for the Touch and Go (TAG) sample collection event. The full-screen visuals included existing conceptual animations and data visualizations, as well as new detailed views of Bennu by Kel Elkins, new TAG beauty shots, Nightingale scale animations, and the "What If ?" Scenario animations by the Conceptual Imaging Lab. The detailed 3D Bennu Model created for many of OSIRIS-REx visualizations by Kel Elkins was selected for the cover of the November 6, 2020 special issue of Science magazine.

The videos were created to inform the public about the OSIRIS-REx TAG Event, the numerous technical challenges of navigating a spacecraft to the surface of a distant asteroid in microgravity, what could go wrong while collecting the sample from the surface of Bennu, and the painstaking preparations of mission team members to make it a success.

COVID-19 brought extra challenges. Dan Gallagher, USRA’s lead producer of the video coordinated filming during the pandemic, and at a time when Goddard’s television studio happened to be under construction and largely stripped of its set. With no possibility of traveling to the mission partners at the University of Arizona (Tucson) and Lockheed Martin Space (Denver) to film, all filming had to take place in the deconstructed Goddard TV studio. Despite these constraints and challenges, Dan successfully blended the real and virtual elements, resulting in outstanding video products seen below.

The entire gallery of OSIRIS-REx content can be found here:

(most webpages will include a link the video on YouTube)