Washington, DC and Houston, TX—January 20, 2023. A recent study published in Nature Geoscience shows the most relevant results obtained from the Mars Environmental Dynamics Analyzer (MEDA)—onboard NASA’s Mars 2020 mission—during the first 250 sols (a sol is one martian day, slightly longer than one day on Earth) of the mission. Specifically, the authors determine, for the first time, the surface radiative budget on Mars using in situ measurements, which is fundamental to validate and improve predictive capabilities of numerical models.

MEDA is the most sophisticated and capable weather station ever sent to another planet. MEDA’s main goal within the mission is to enable future human exploration. To achieve this goal, MEDA is taking surface weather measurements to validate atmospheric predictive models, and to understand the effects of airborne dust on the operation of surface assets and human health. 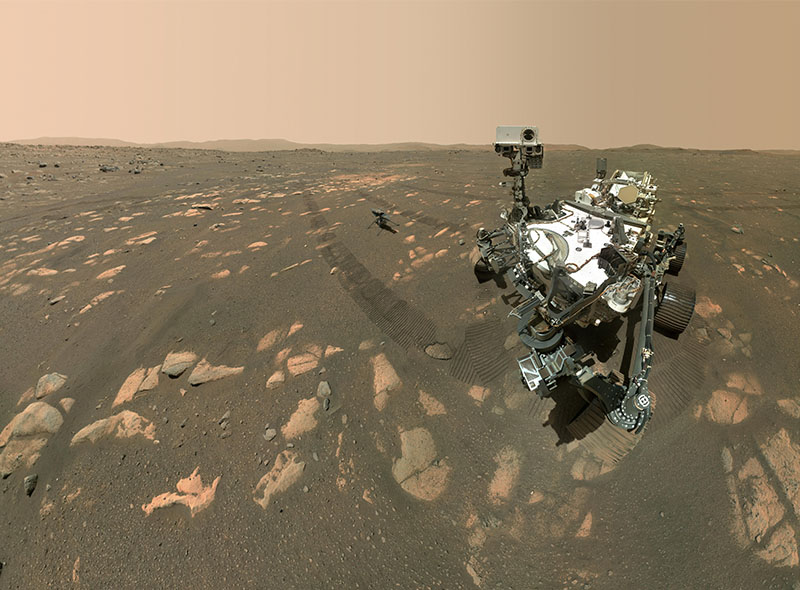 NASA’s Mars Sample Return mission will send two fetch helicopter drones that will pick up the sample tubes Perseverance leaves behind. MEDA is providing invaluable info about the density and turbulence of the martian atmosphere that will be used for the design and operations of future drones. Credit: NASA/JPL-Caltech/MSSS.

“The data that MEDA is logging will undoubtedly help engineers to design future missions, prepare astronauts, and devise habitats to cope with the harsh martian conditions. With MEDA, we have been able to observe for the first time halos on another planet, study in detail the properties of clouds and dust in suspension, validate orbital data, and study wind patterns,” says José Antonio Rodríguez-Manfredi, lead author of the study. “In short, our instrument allows us to characterize physical processes in the atmosphere from local to global scales, resulting in a better understanding of martian atmospheric dynamics.”

Moreover, the authors calculate the atmospheric dust content and thermal profiles during day and night, complementing and extending daytime measurements from previous surface-based and orbital missions. These measurements are vital in supporting flights of Ingenuity (the helicopter on board the Mars 2020 mission) and to prepare flights for the two sample recovery helicopters considered for the Mars Sample Return mission.

An important objective of MEDA is to validate satellite measurements of surface properties such as thermal inertia, which modulates the amount of energy flux that is transported into the subsurface and thus determines surface and shallow subsurface temperatures, and albedo, which represents the fraction of incident illumination reflected by the surface. Since MEDA’s field of view is at least 2000 times smaller than that of satellites, local values measured by MEDA show a much larger range of variation compared to orbital estimations. However, there is an excellent agreement between MEDA and orbiters when averages over Perseverance’s traverse are considered. Therefore, MEDA is providing ground truth to orbiters but also unveiling important heterogeneities at local scales.

The reflective properties of Jezero Crater’s floor—the landing site of the Mars 2020 mission—are strongly non-isotropic. That is, the solar illumination is not scattered equally in all directions. Like on dry surfaces of Earth’s deserts, the martian surface reflects more light at dawn and dusk than near noon. This is important for improving predictive capabilities of numerical models, which do not incorporate variations in the reflective properties of the surface in diurnal timescales.

“The MEDA weather station is proving instrumental for the Mars 2020 mission,” says Germán Martínez, USRA scientist at the Lunar and Planetary Institute, coauthor of the investigation, and co-lead of the Mars 2020 Atmospheric Working Group. “MEDA is paving the way for the coming Mars Sample Return mission.”

Founded in 1969, under the auspices of the National Academy of Sciences at the request of the U.S. Government, the Universities Space Research Association (USRA) is a nonprofit corporation chartered to advance space-related science, technology, and engineering. USRA operates scientific institutes and facilities and conducts other major research and educational programs. USRA engages the university community and employs in-house scientific leadership, innovative research and development, and project management expertise. More information about USRA is available at www.usra.edu.

The Lunar and Planetary Institute (LPI), operated by Universities Space Research Association, was established during the Apollo program in 1968 to foster international collaboration and to serve as a repository for information gathered during the early years of the space program. Today, the LPI is an intellectual leader in lunar and planetary science. The Institute serves as a scientific forum attracting world-class visiting scientists, postdoctoral fellows, students, and resident experts; supports and serves the research community through newsletters, meetings, and other activities; collects and disseminates planetary data while facilitating the community's access to NASA science; and engages, excites, and educates the public about space science and invests in the development of future generations of explorers. The research carried out at the LPI supports NASA's efforts to explore the solar system. More information about LPI is available at www.lpi.usra.edu.