Washington, DC and Seattle, WA—January 12, 2023. New research suggests that the High Velocity Cloud (HVC) Complex M may be the result of a supernova that blew up about four million years ago. The findings will be featured in the Astrophysical Journal in a paper entitled  Radio and Gamma-ray Evidence for the Supernova Origin of High Velocity Cloud Complex M: Schmelz, J.T. (2022), Verschuur, G.L. and presented at a press conference at the 241st Meeting of the American Astronomical Society held in Seattle, Washington in January 2023. 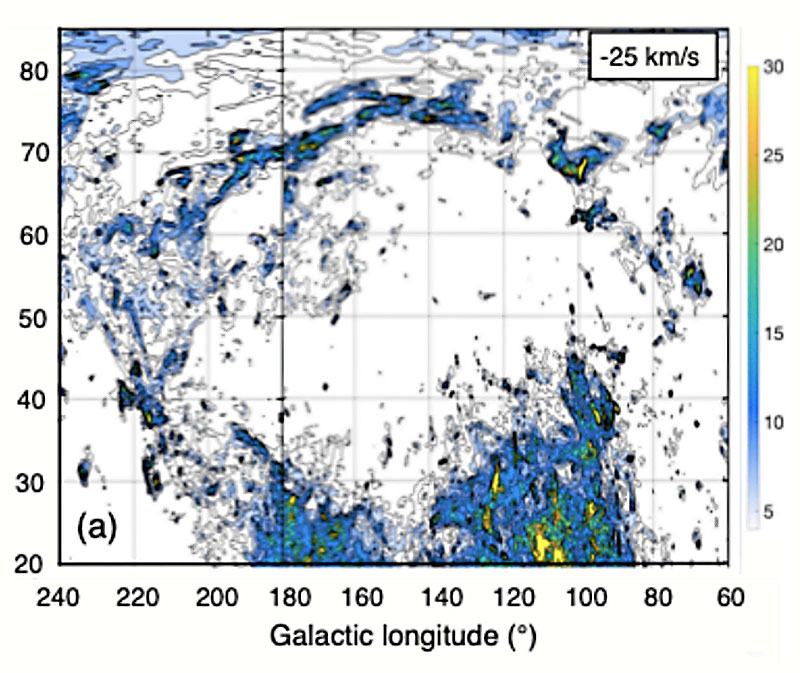 Fig 1. Neutral hydrogen emission map at a velocity of -25 km/s using a bandwidth of 5 km/s showing the outlines of a cavity centered approximately at (l, b) = (150o, 50o) and extending from about 90° to 210° in longitude and 25° to 75° in latitude. Legend is brightness temperature in degrees Kelvin. Data are from the 100-m telescope in Effelsberg, Germany Credit: G. Verschuur

Radio data from the 100-m telescope in Effelsberg, Germany and g-ray data from the NASA’s Imaging Compton Telescope (COMPTEL) reveal a cavity of interstellar neutral hydrogen gas centered at galactic coordinates (l, b) ~ (150°, 50°) with a radius of about 33°. The best view of the cavity is at a velocity of -25 km/s (see Fig 1), which shows a circular cross section on the back (receding) face of this cavity. Complex M is on the front (approaching) face. The cavity is also visible in 1-30 MeV g-ray emission (Fig 2).

“The supernova that created this cavity would also sweep up nearby hydrogen gas,” said Joan Schmelz, an astronomer at USRA and the lead author on a recent paper describing the new results. “Complex M may have ridden the blast wave to reach the observed high velocities.”

Attempts to explain the origin and energy of HVCs go back to the early days of radio astronomy in the 1960s when researchers discovered huge clouds of interstellar hydrogen gas whose velocities did not conform with the regular rotation of the Milky Way Galaxy. Promising models included condensations in the hot galactic halo, parts of the outer spiral structure, return flows in a galactic fountain, infall to the Galaxy, and fallout from the Perseus super-shell. With the notable exception of the Magellanic Stream, which was torn out of the Magellanic Clouds in a tidal interaction with the Milky Way, the debate over the origin stories for HVCs continues. 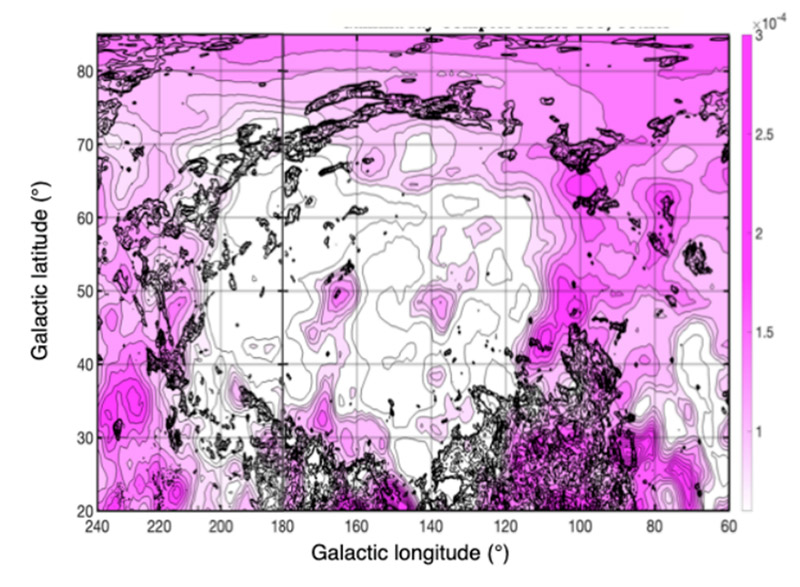 Although supernovae were considered as the source of HVC energy, they were rejected based on the evidence available at the time from optical absorption studies that placed the HVC at kiloparsec distances, thereby making the energy considerations unlikely.

Using the know distance to Complex M, 150 pc, and assuming that the cavity is spherical, researchers were able to bootstrap the distance to the original, explosive source of the cavity, D = 307 pc, calculate the radius of the cavity, R = 166 pc, and approximate the expansion velocity, vE ~ 40 km/s, of the cavity. The total energy of the expanding cavity is 3.0 ± 1.0 × 1050 ergs, well within the range of a single supernova.

As the blast wave from this supernova propagated outwards, it began to sweep up interstellar gas and carved out the Local Chimney, a low-density extension of the Local Bubble that reaches into the galactic halo.

“The source of the explosion might be an isolated neutron star,” said Gerrit Verschuur, a co- author on the paper who has been studying HVCs for much of his career, “but finding it would be like searching for an invisible needle in a haystack.”

Although the detection of this elusive neutron star would be solid evidence in support of the supernova model, the very existence of the cavity as well as the physical parameters that result assuming the new nearby (at lease astronomically speaking) distance, make this scenario a viable contender for the origin story of Complex M.