Houston, TX and Columbia, MD—May 17, 2019. The Lunar and Planetary Institute (LPI), managed by Universities Space Research Association (USRA), has compiled and made available an atlas of the Moon’s south pole ( https://www.lpi.usra.edu/lunar/lunar-south-pole-atlas/). Given NASA’s recent direction to implement Space Policy Directive-1 landing astronauts at the south pole by 2024, the LPI has compiled a series of maps, images, and illustrations designed to provide context and reference for those interested in exploring this area. 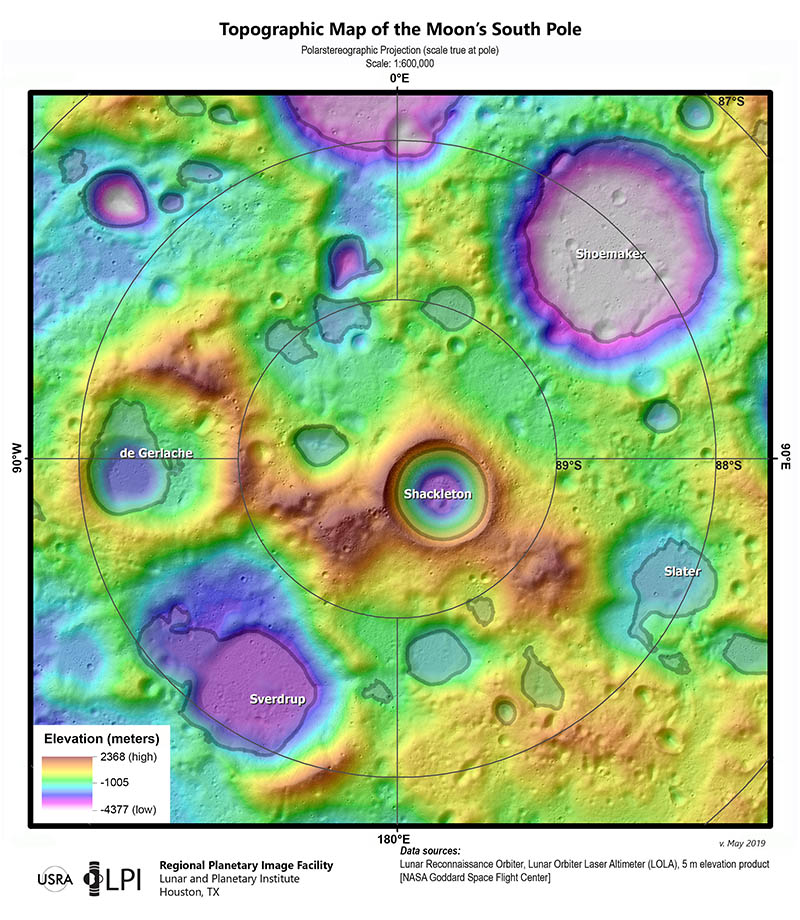 The highlight of the new online atlas is a set of 14 topographic maps derived from Lunar Reconnaissance Orbiter (LRO) data. Dr. Julie D. Stopar, USRA staff scientist and director of the Regional Planetary Image Facility (RPIF) at the LPI, utilized these data to generate a series of south pole maps that can be used to visualize the terrain near the south pole.

“There are many exciting places to explore on the Moon, but the south pole has long held promise for a sustainable human presence,” says Dr. Stopar. “This collection can assist mission planners in this new era of south pole exploration.”

LRO has been in orbit collecting data since late June 2009 — almost a decade. LRO is in a polar orbit, meaning that it passes near the poles multiple times each day, resulting in many opportunities to study the south pole over the entire mission. As a result, there is an abundance of topographic data and images already available from the poles, including several digital elevation models derived from LRO’s Lunar Orbiter Laser Altimeter (LOLA) instrument. These data are freely available in NASA’s Planetary Data System.

The temperatures and illumination conditions at the lunar poles are dependent on local topography. At the poles, the Sun never rises much beyond a degree from the horizon, creating long shadows cast from topographically elevated areas. Over the course of a year, the Sun will appear to move around the lunar horizon, changing the angle and extent of the shadows. However, some areas near the poles, particularly those in low topographic areas are always in shadow, never receiving direct sunlight. These areas are permanently shadowed and very cold – so cold that volatiles like water-ice become trapped there. Water-ice trapped near the lunar poles is particularly of interest for future explorers, as it may serve as a ready source of breathable air, drinkable water, and spacecraft propellant. The new south pole maps can be used to identify and characterize topographically elevated (and illuminated) areas as well as permanently shadowed areas.

Other content in the new atlas is drawn from the LPI’s RPIF collection of lunar images and maps, and LPI’s library of classroom illustrations. Links to additional data products derived from recent and ongoing planetary missions are also included.

About LPIThe Lunar and Planetary Institute (LPI), operated by Universities Space Research Association, was established during the Apollo program to foster international collaboration and to serve as a repository for information gathered during the early years of the space program. Today, the LPI is an intellectual leader in lunar and planetary science. The Institute serves as a scientific forum attracting world-class visiting scientists, postdoctoral fellows, students, and resident experts; supports and serves the research community through newsletters, meetings, and other activities; collects and disseminates planetary data while facilitating the community’s access to NASA science; and engages and excites, and educates the public about space science and invests in the development of future generations of explorers. The research carried out at the LPI supports NASA’s efforts to explore the solar system. More information about LPI is available at www.lpi.usra.edu.