Washington DC and Seattle WA—January 12,  2023.  Traditional studies have placed High Velocity Clouds (HVCs) at great distances, in the Galactic halo and beyond. However new research suggests that the distance to HVC Complex M may be much closer—only 150 pc. These findings appear in a paper entitled “The Distance to High-Velocity Cloud Complex M,” that has been accepted for publication in the Astrophysical Journal and presented at the 241st Meeting of the American Astronomical Society held in Seattle, Washington in January 2023. 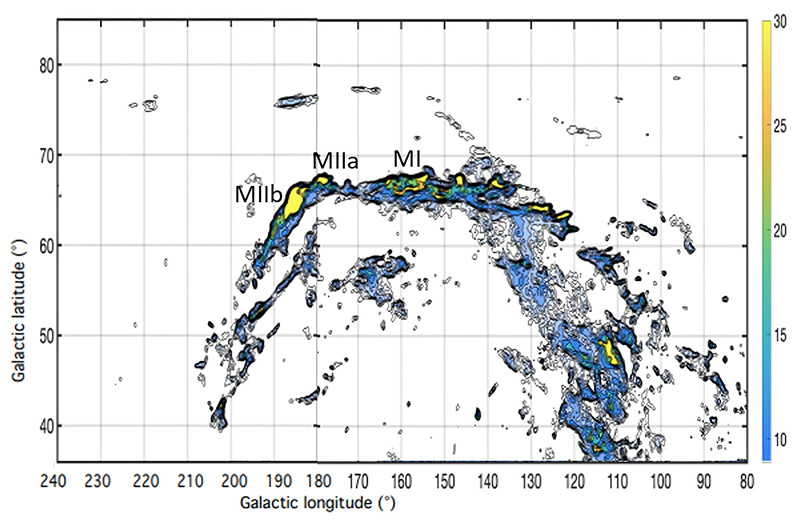 Neutral hydrogen emission map of Complex M at a velocity of -85 km/s using a bandwidth of 20 km/s showing the connections between high-velocity “clouds” MI, MIIa, and MIIb, which appear to be density concentrations of a long, arched filament that extends from about (longitude, latitude) = (105°, 53°) to (196°, 55°). Also visible here is the intermediate-velocity arch, which may be a distinctly different feature. It begins at the base of the map around (longitude, latitude) = (115°, 37°) and crosses Complex M at (115°, 85°). Legend is brightness temperature in degrees Kelvin. Data are from the 100-m telescope in Effelsberg, Germany Credit: G. Verschuur

The debate over the origin of HVC complexes goes back to the early days of radio astronomy in the 1960s. HVCs are concentrations of hydrogen gas with velocities that are not consistent with the regular rotation of the Milky Way Galaxy. Some HVC complexes could have been part of another galaxy that was disrupted by a close encounter with the Milky Way. Others may have been ejected from the Galaxy and are only now falling back.

In principle, a star behind an HI cloud might show HVC absorption features, but a star in front would not. If the distances to the stars are known, the cloud should lie between them. This seemingly straightforward method is complicated by the relatively recent understanding that the HI gas is filamentary. Thus, the assumption of homogeneity over the entire radio beam for a feature with a cloud-like appearance does not seem to hold up. In fact, warnings against using a non-detection to constrain the distance have now appeared in the literature. As a result, the traditional absorption line studies can provide a well-defined upper limit but not a lower limit to the distance.

Even the customary naming of various HI structures can be confusing as data quality improves. What appeared to be isolated “clouds” in maps from old surveys might now be seen as parts of filaments as sensitivity, resolution, and dynamic range improve. New results show that the well- known HVCs designated as MI, MIIa, and MIIb, which appeared as clouds in earlier studies are, rather, local density concentrations or line-of-sight enhancements in a long, twisted filament that arcs across the sky (see figure).

“These new surveys of interstellar hydrogen are such an improvement,” said Gerrit Verschuur, the lead author on the paper who has been studying HVCs for much of his career. “It’s the quality of the data that motivated us to take a new look at the old HVC problem.”

The data are from the l21-cm galactic neutral atomic hydrogen survey taken with the 100-m telescope in Effelsberg, Germany. MI is traveling faster than the surrounding gas. Recently, at least astronomically speaking, it caught up with and began interacting with/crashing into/passing through the arched filament of Complex M.

“If this is the case, we can use our distance to MI to bootstrap the distance to Complex M,” said Joan Schmelz, an astronomer at USRA and a co-author on the paper. “Both are much closer than previously thought - about 150 pc away.”

If the distance to the Complex M is 150 pc, then the mass is about 120 solar masses. If the original energy source were a supernova, this mass would be a combination of the matter from the explosion as well as gas swept up as the blast wave moved through interstellar space. The energy implied using the observed line-of-sight velocity, -85 km/s, is 8.4 × 1048 ergs. Integrating over 4π steradians, the total energy for a spherically symmetrical explosion is estimated to be 1.9 × 1050 ergs, well within the energy budget of a typical supernova.

The remaining neutron star would be the smoking gun required to prove the supernova model, but without a bright binary companion, a pulsar signature, or mass transfer, it would be all but invisible to us. As a result, other explanations for the larger-scale distribution of anomalous- velocity hydrogen are still very much in play, but the distance to Complex M gets us one step closer to unravelling the longstanding HVC mystery.