Supernovae Could Explain Cosmic Dust in the Early Universe

Supernovae Could Explain Cosmic Dust in the Early Universe

Columbia, MD—June 13, 2022. New research from the Stratospheric Observatory for Infrared Astronomy (SOFIA) High-Resolution Airborne Wideband Camera Plus (HAWC+) provides evidence that the cosmic dust in the early universe was formed in supernovae. Though theoretical models have previously shown that dust formation in supernovae could explain the presence of dust in the early universe, whether there would be evidence of sufficient amounts of dust forming remained an open question. 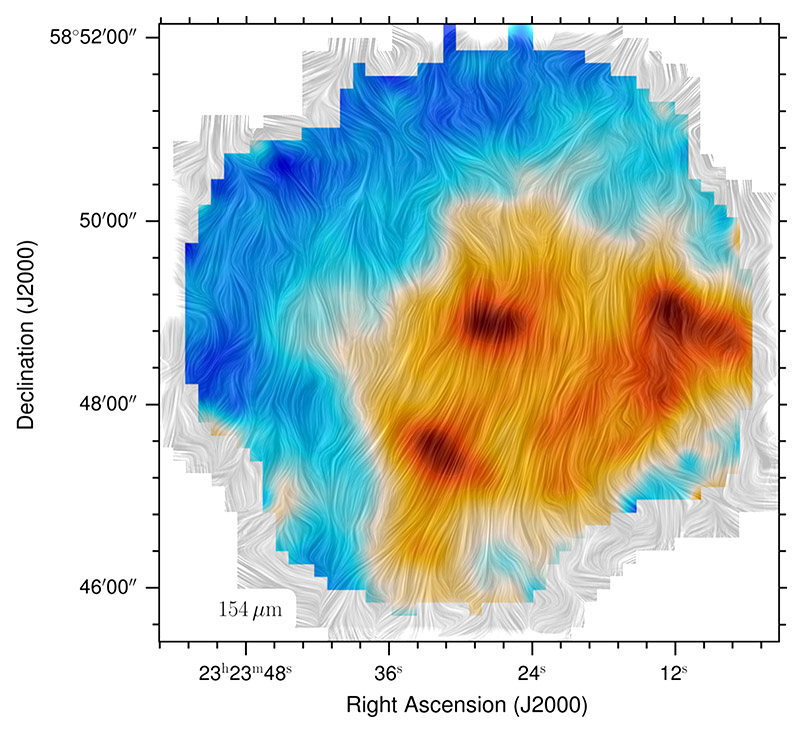 The magnetic field directions are shown on the SOFIA far-IR (154micon) image using the High-Resolution Airborne Wideband Camera Plus (HAWC+) on board SOFIA. The magnetic field strength in Cas A is very strong, 100 milli-Gauss inferred by the polarization measurements. The polarization is relatively weak where the far-infrared emission is stronger (in brown). Credit:NASA/SOFIA

Cosmic dust plays a role in how stars and planets form. By determining the properties of the dust grains, which are comprised of rocks made of elements like carbon and silicates, scientists can better understand the history of star formation and the evolution of the universe.

SOFIA HAWC+ observations of the relatively young supernova remnant (SNR) Cassiopeia A (Cas A), located about 11,000 light-years away from Earth, show strong polarization from the SNR. In other words, the dust grains are strongly aligned with one another. The findings were presented at the 240th American Astronomical Society Meeting in Pasadena, California.

Studying far-infrared emissions like the ones seen is Cas A is tricky because they also arise from the interstellar medium which is everywhere in the sky. However, far-infrared polarization observations improve the contrast of the SNR with respect to the ISM enabling a cleaner detection of the SNR dust emission. By observing with SOFIA's HAWC+ – a far-infrared camera and imaging polarimeter – the researchers were able to identify the shapes, sizes, and types of dust grains present, and their relationship with the magnetic fields in the region.

The strong polarizations found in Cas A have several implications about the dust emitted by SNRs. For one, the fact that polarized dust emission comes from an SNR implies that supernovae produce a large mass of dust and were important dust sources in the early universe. Additionally, the composition of the grains can be determined, and are found to be predominantly made of silicates and are large and elongated, rather than spherical, when newly formed.

The large amount of dust from the polarized regions of the SNR shows that supernovae are major dust producers in the early universe. This result is significant because the survival rate for silicate dust is higher than for other kinds of dust, so sufficient dust still exists behind the reverse shock.

Dr. Jeonghee Rho, a research scientist at the SETI Institute and lead author of this study, said the polarized dust emission belongs to the SNR Cas A and is not random interstellar emission.

This work brings us closer to uncovering processes in the early universe leading to star and planet formation. Observations or simulations at additional wavelengths, such as with the James Webb Space Telescope, will help provide a greater understanding of the dust composition.

This research is funded by NASA through the award SOF07_0047 issued by USRA and the ADAP award 80NSSC20K0449 issued by NASA headquarters.

Founded in 1969, under the auspices of the National Academy of Sciences at the request of the U.S. Government, the Universities Space Research Association (USRA) is a nonprofit corporation chartered to advance space-related science, technology, and engineering.  USRA operates scientific institutes and facilities, and conducts other major research and educational programs. USRA engages the university community and employs in-house scientific leadership, innovative research and development, and project management expertise. More information about USRA is available at www.usra.edu.

About the SETI Institute

Founded in 1984, the SETI Institute is a non-profit, multi-disciplinary research and education organization whose mission is to lead humanity's quest to understand the origins and prevalence of life and intelligence in the Universe and share that knowledge with the world. Our research encompasses the physical and biological sciences and leverages data analytics, machine learning, and advanced signal detection technologies. The SETI Institute is a distinguished research partner for industry, academia, and government agencies, including NASA and the National Science Foundation.