Columbia, MD—April 21, 2022. To study the atmospheric circulation on Jupiter, researchers observed the hydrogen near Jupiter’s upper troposphere. In doing so, they noticed that Jupiter’s four moons—the Galilean satellites—had entered their field of view and they were able to capture the temperature variations in the subsurface layers of these four satellites as well.  The results were published in a recent paper in the Planetary Science Journal describing the observations. 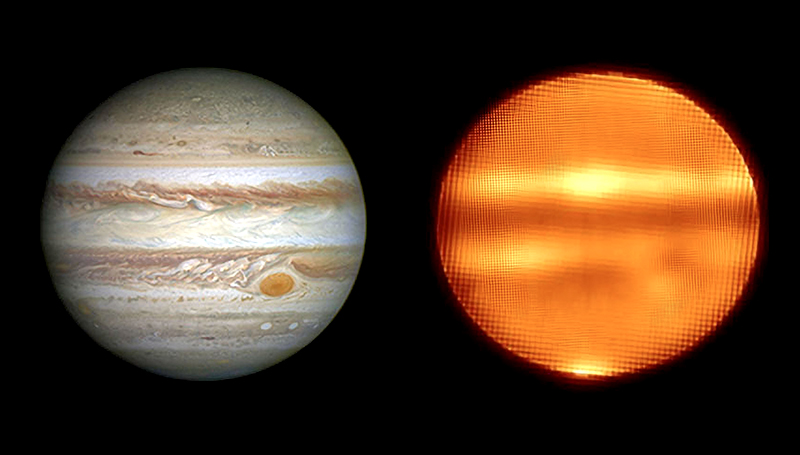 During flights in August 2018 and July 2019, planetary scientists used the Stratospheric Observatory for Infrared Astronomy (SOFIA), a joint project of NASA and the German Space Agency at DLR, to study the atmosphere on Jupiter. To do this, they looked at hydrogen.

Hydrogen molecules – H2 – can be arranged in two different ways, known as parahydrogen and orthohydrogen. The two orientations have distinct energies, so determining the ratio of parahydrogen to orthohydrogen can tell astronomers about the overall temperature.

The researchers studied the concentration of parahydrogen and orthohydrogen at altitudes just above Jupiter’s main cloud deck. They discovered that, around the equator, warm gas is rising into the atmosphere. At the north and south poles, however, the opposite is occurring: Cold gas from the higher, cooler levels of the atmosphere is traveling downward.

“This gives a sense of the general circulation: rising at the equator, sinking near the poles,” said Imke de Pater, lead author of the paper.

Jupiter’s atmosphere had been studied through the lens of hydrogen before – by SOFIA in 2014, and by NASA’s Voyager 1 and 2 in 1979 – but only during the northern Jovian summer. The current observations were the first ever taken during Jupiter’s northern winter, about half a Jovian year after the 2014 SOFIA studies. This comparison illustrated how Jupiter’s poles change with the seasons, showing that its far north remains cooler than its far south, regardless of time of year.

Jupiter’s northern and southern hemispheres are known to have an asymmetric aerosol distribution, so this temperature imbalance between its two poles is likely an effect of its asymmetry.

In studying Jupiter, de Pater and her colleagues also saw four other objects that had entered SOFIA’s field of view and the data collected: Jupiter’s four largest moons, known collectively as its Galilean satellites – Io, Europa, Ganymede, and Callisto.

“We were surprised that we actually captured all four satellites, and could determine their brightness temperature,” de Pater said.

Thanks to this pleasant surprise, the group could clearly see how the moons’ temperatures decrease with depth in their subsurface layers. These temperature changes can eventually be used to determine the composition, density, and other properties inside the satellites.

The satellites all have unique characteristics – ranging from water ice on Europa, to heavy craters on the ancient Callisto, to extreme volcanic activity on Io – making their material makeup particularly interesting to investigate.

Jupiter and its moons are too bright to be observed by the long wavelength channels on the James Webb Space Telescope as they can saturate the instrument, and they cannot be measured from the ground due to Earth’s atmosphere blocking a large amount of mid-infrared radiation. SOFIA’s unique access to the mid-infrared, therefore, enables these measurements and provides critical information about Jupiter and its moons.

Founded in 1969, under the auspices of the National Academy of Sciences and at the request of the U.S. Government, the Universities Space Research Association (USRA), is a nonprofit corporation chartered to advance space-related science, technology and engineering.  USRA operates scientific institutes and facilities, conducts major research, manages educational programs, and engages the university community in diverse activities. It is involved in innovative R&D and is known for its project management expertise. More information on USRA is available at www.usra.edu