Columbia, Maryland--July 9, 2021.  Infrared data obtained by SOFIA was crucial for studying an outburst from a massive protostar in the iconic Cat’s Paw Nebula that is now glowing at 50,000 times the luminosity of the Sun. 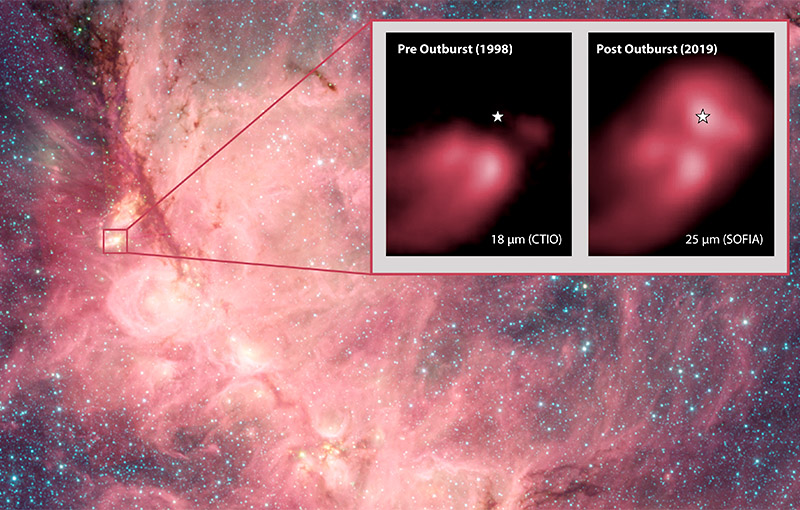 Even though the birth of stars is hidden from the view of even the most powerful optical telescopes, longer wavelength infrared and millimeter light can pierce through the tons of obscuring gas and dust. These observations reveal the environments where massive stars are forming, and enables astronomers to finally compare the physics governing these lesser-known processes with those that are observationally well established for low-mass stars like our Sun.

Stars form via the gradual, continuous accretion of matter from a surrounding disk. But this steady process is occasionally interrupted as a massive clump from the disk falls onto the forming star, causing a tremendous outburst of energy that can last from several months to hundreds of years. Such outbursts have been seen in dozens of low-mass protostars during the past 50 years.

While monitoring NGC 6334 I, a well-studied protostar cluster in the Cat’s Paw Nebula, researchers discovered a millimeter outburst from a massive protostar with the Atacama Large Millimeter/submillimeter Array, or ALMA. Unlike some of its companions, this particular protostar is so deeply embedded that it was not even detectable in the infrared prior to the outburst. The findings are published in Astrophysical Journal Letters. The lead author is Todd Hunter from NRAO and Universities Space Research Association’s James De Buzier is a co-author (DOI 10.3847/2041-8213/abf6d9).

“The most interesting aspects of this outburst are the extreme luminosity and longevity,” said James De Buizer, USRA senior scientist for SOFIA based at Ames. “This event now exceeds all other accretion outbursts in massive protostars by a factor of about three in both energy output and duration.”

Using the Stratospheric Observatory for Infrared Astronomy (SOFIA), the region was revisited after the discovery of the millimeter outburst. Observations by SOFIA’s FORCAST and HAWC+ instruments revealed that infrared emission from the protostar had also increased considerably. Not only could the protostar be seen in the infrared, but it was now the brightest infrared source in the entire cluster.

Because the radiation generated from an accretion event emerges mainly in the infrared, SOFIA data is crucial for deriving the total luminosity of the young star and the fundamental parameters of the outburst. Combining the SOFIA and ALMA data allowed astronomers to test predictions of how massive disks fragment. It also helped them rule out alternative causes of the outburst, like a stellar merger, or less likely explanations for the protostar’s sudden appearance, like changes in gas and dust clouds along the telescope’s line of sight.

“Since the matter distribution surrounding the star is clumpy, fragments occasionally fall onto the growing star,” said Todd Hunter, an astronomer at the National Radio Astronomy Observatory (NRAO), in Charlottesville, Virginia, and lead author on the paper. “In this case, it may have even triggered a temporary change in the size and temperature of the protostar.”

These observations show the importance of continuous access to the infrared observations to enable time-domain studies of the important accretion stage of massive star formation. Moreover, the new observations by SOFIA provide strong evidence of episodic accretion in young massive stars. Presumably such accretion bursts, while rare for an individual object, often occur somewhere in the galaxy, due to the large number of protostars in this phase.

“Without SOFIA, accurate measurements of the mass and luminosity of this event and future events would not be possible,” added co-author Crystal Brogan, also an astronomer at NRAO.

These new findings confirm that the formation of high-mass stars can be considered a scaled-up version of the process by which low-mass stars, like our Sun, are born. The main differences are that massive stars would form with larger disks, higher accretion rates, and on much shorter time scales (around 100,000 years instead of several million years).

SOFIA is a joint project of NASA and the German Space Agency at DLR. DLR providesthe telescope, scheduled aircraft maintenance, and other support for the mission.NASA’s Ames Research Center in California’s Silicon Valley manages the SOFIA program, science, and mission operations in cooperation with the Universities Space Research Association, headquartered in Columbia, Maryland, and the German SOFIA Institute at the University of Stuttgart. The aircraft is maintained and operated by NASA’s Armstrong Flight Research Center Building 703, in Palmdale, California.