Columbia, MD—May 20, 2022. With its observations of a special pair of stars at a special moment in their lives, the Stratospheric Observatory for Infrared Astronomy (SOFIA) is shedding new light on stardust. 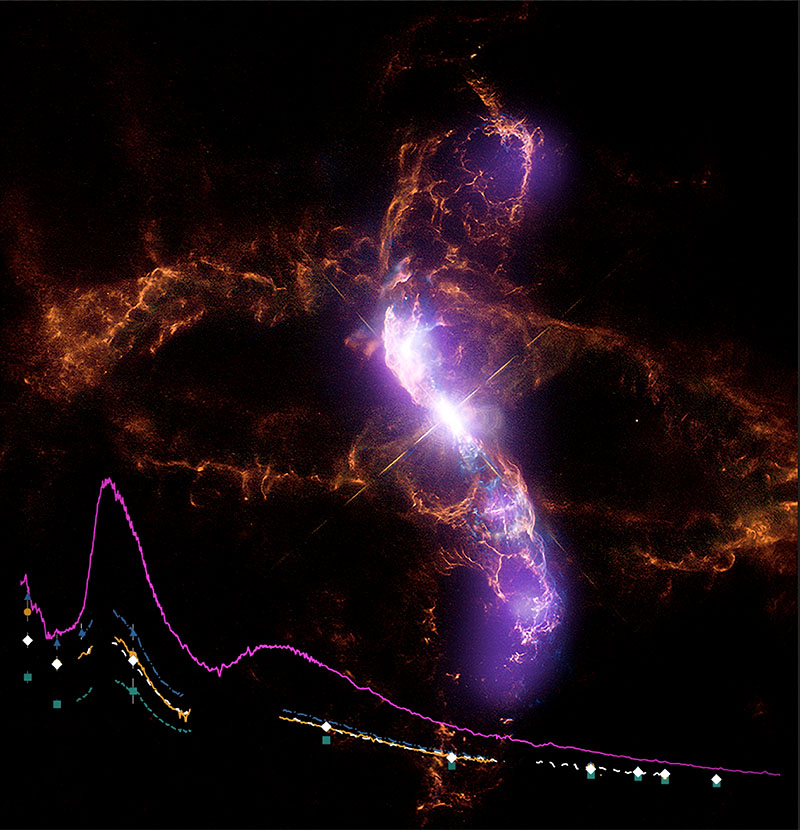 This composite image of R Aquarii resembles a ring of fire over a black field, with a glowing purple “S” flowing through it. Near the center of the image, in the middle of the ring and the “S” wave, is a twinkle of bright white, which is the Mira variable in R Aquarii. The white dwarf is very faint and contributes very little to the optical emission. However, the purple wave is the result of a jet that is powered by the white dwarf accreting dust produced by the Mira variable. The smokey red circles are evidence of explosive events that occurred several hundred years ago.

Overlaid atop the composite image of R Aquarii is a set of five plots indicating the energy emitted by the system. SOFIA acquired four of the data sets, while the strong purple plot is data from the Infrared Space Observatory from 1996, when R Aquarii’s emission was strongest. The strength also depends on the phase of the binary star system’s eclipse, so it does not increase each successive year, exactly: the flux fell between 2018 and 2019.

Over an interval of 387 days, a giant star in the constellation Aquarius periodically has a dramatic change in its brightness. This is because the star falls into a category called Mira variables, which pulsate over long periods and surround themselves in a shell of dust.

But this isn’t just any Mira variable. The star is one of two in a binary star system known as R Aquarii, where it has a companion white dwarf. The two orbit one another, and the white dwarf crosses in front of the Mira variable every 43.6 years, causing an eclipse from the perspective of a viewer on Earth.

Another feature that’s special about R Aquarii is that the periastron, or the point in the orbit where the two stars are closest to each other, happens during the eclipse. This means that as the eclipse occurs – and the pair gets dimmer and dimmer, overall – the white dwarf and the Mira variable get closer and closer together. The white dwarf accretes more and more of the dust surrounding the Mira variable, and, because of this optimal geometry, we get to watch this process occur.

Since 2016, SOFIA, a joint project of NASA and the German Space Agency at DLR, has been monitoring the onset of the eclipse, which started in 2018, with periastron expected to occur in 2023. The flow of dust can be inferred at mid-infrared wavelengths, and SOFIA’s infrared camera, FORCAST, has just the right angular resolution to watch.

By combining what they know about the system – the distance between the two stars, the fact that an eclipse is ongoing, and predictions of how much dust there is – astronomers can figure out the balance between the amount of dust escaping the Mira variable and how much is being accreted by the white dwarf. These are “both very big questions,” said Ravi Sankrit, an astronomer at the Space Telescope Science Institute in Baltimore and first author on a recent paper published in The Astrophysical Journal about SOFIA’s 2018 and 2019 observations of R Aquarii.

“It’s an opportunity to see it in a unique way, because the material that’s being accreted isn’t obscured by the Mira, it’s right out in front,” added Steven Goldman, a scientist with Universities Space Research Association, based at NASA’s Ames Research Center in California’s Silicon Valley. Goldman is a co-author on the paper, which looks at how the onset of the eclipse is beginning to affect the dust surrounding the system.

Since the two stars move from being very far apart to very close to one another, their dust is constantly changing. Continued mid-infrared monitoring is required to fully understand how the dust is affected by the stars’ orbit.

“Binarity, winds, jet formation, mass loss, and accretion are fundamental astrophysics,” Sankrit said. “So, the real excitement here is that you’re getting something that is on a human timescale probing very fundamental aspects of astrophysics.”

The physics that Sankrit, Goldman, and their team are uncovering is applicable to more than just R Aquarii. There are hundreds of other similar binaries, and those are just the ones we know of. These other binary systems are likely experiencing the same phenomenon but aren’t oriented correctly for us to be able to see their periastron and the changes in their surrounding dust.