Columbia, Maryland—April 23, 2021. After making numerous discoveries of how magnetic fields shape our universe, an instrument flying on board the Stratospheric Observatory for Infrared Astronomy is about to get even faster at gathering data. 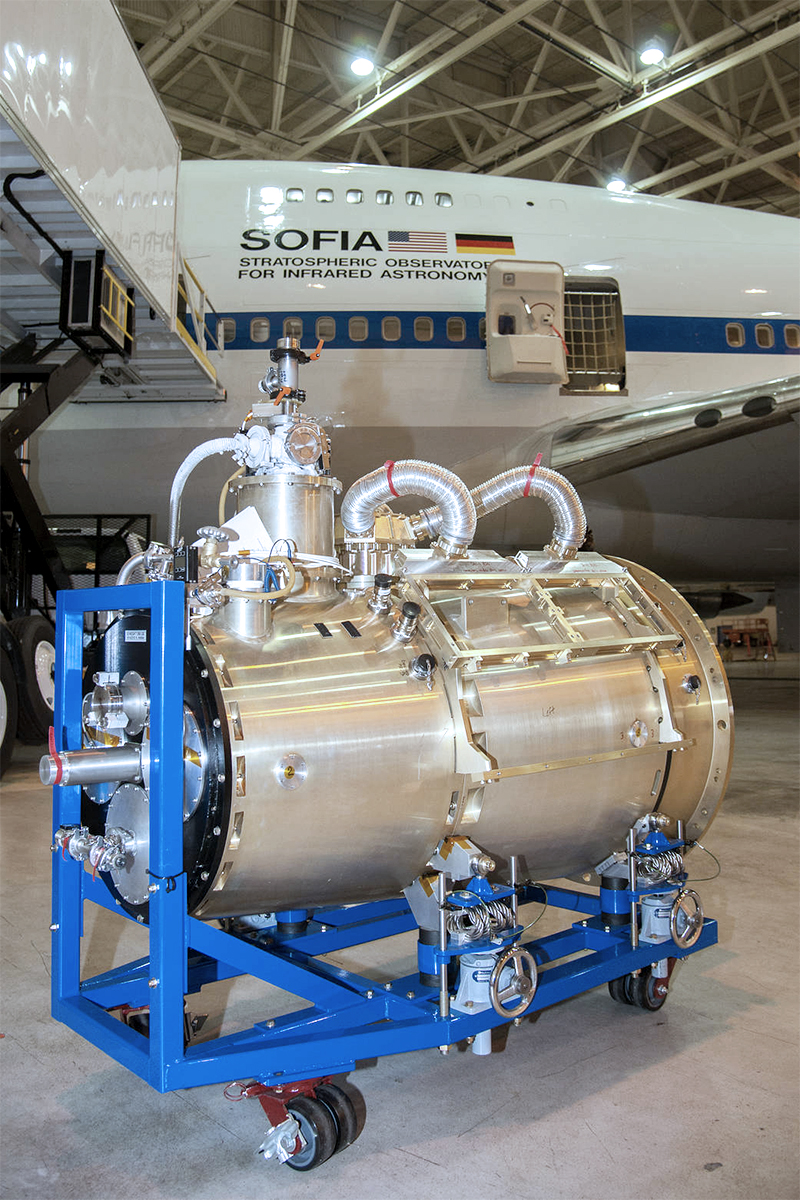 The High-resolution Airborne Wideband Camera-Plus, or HAWC+ awaits installation.on SOFIA. The aircraft is in the background. Image credit: NASA

SOFIA is upgrading the High-resolution Airborne Wideband Camera-Plus, or HAWC+ with four new detectors that will allow it to study magnetic fields in distant galaxies four times faster than its current rate.

“We want to speed up the pace of scientific discovery, and we can do that by making HAWC+ even better,” said  Dr. Margaret Meixner, Director of Science Mission Operations at Universities Space Research Association. “This upgrade is part of a number of initiatives we’re implementing to take SOFIA into the future.”

The HAWC+ upgrade is expected to be completed by 2023 and is the first step in the proposed outline for future instrumentation of SOFIA, a joint project of NASA and the German Aerospace Center, DLR. Based on feedback from a scientifically diverse group of astronomers, two additional instruments are envisioned that will enhance SOFIA’s ability to make new discoveries.

HAWC+ is the only currently operating  instrument in the world in an observatory that uses far-infrared light and has a polarimeter, a device that measures polarized light from celestial dust grains, to infer the shape and direction of magnetic fields.

Scientists are eager to learn more about the role magnetic fields play in shaping galaxies and the formation of stars,and observations like those SOFIA provides, using far infrared light, are critical to getting a clearer picture.

Flying at 40,000 feet and above the interfering layers of the atmosphere, SOFIA offers a one-of-a-kind platform for observing the infrared universe. Because it returns to the ground after each flight, its instruments can easily be exchanged, serviced or upgraded to harness new technologies that may one day be optimized to fly in space.

According to the roadmap published earlier, two new instruments envisioned for SOFIA include a highly sensitive spectrometer and a terahertz mapper. The highly sensitive sperctometer improves SOFIA's ability to measure faint signals by a factor of 10. With this spectometer, SOFIA could, for the first time, measure the mass of gas, water vapor and ice in the earliest phases of planet formation enabling astronomers to learn how planetary systems form. The new terahertz mapper would build on the success of another of SOFIA's  current flagship instruments, the German Receiver at Terahertz Frequencies, or GREAT, by using similar technology with100 pixels--an increase from GREAT’s 14 pixels. This will allow the new instrument to make observations 14 times faster.

Founded in 1969, under the auspices of the National Academy of Sciences at the request of the U.S. Government, the Universities Space Research Association (USRA) is a nonprofit corporation chartered to advance space-related science, technology and engineering. USRA operates scientific institutes and facilities, and conducts other major research and educational programs, under Federal funding. USRA engages the university community and employs in-house scientific leadership, innovative research and development, and project management expertise. More information about USRA is available at www.usra.edu