Washington DC—October 13, 2022.  Astronomers using SOFIA, the Stratospheric Observatory for Infrared Astronomy, discovered something unique: a new type of stellar outburst that had never been seen before in the type of system under study. Through some scientific detective work, they were able to identify the characteristics that made this outburst different, placing it in its own brand-new category. The findings will be published in The Astrophysical Journal. 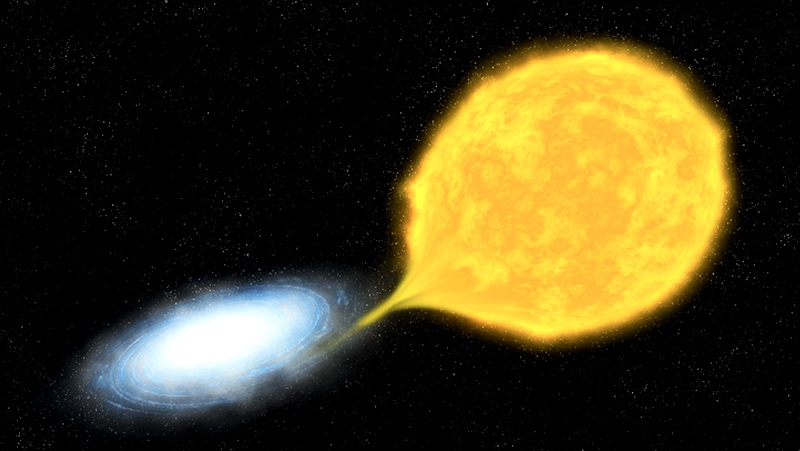 Artist’s rendition of a cataclysmic variable, in which a white dwarf (white/blue) is accreting material from its nearby Sun-like companion (yellow). The material forms a disk around the white dwarf, until an instability causes an explosion and a bright outburst of light, known as a nova. Credit: NASA/SOFIA/L. Proudfit

In what is known as a classical nova, a white dwarf – the dense remnant of a star in the final stage of its evolution – accumulates material from a nearby Sun-like companion star. The material absorbed from the companion star builds up on the surface of the white dwarf, until extreme pressures and densities cause a nuclear explosion, ejecting the material from the surface of the white dwarf. This creates a bright burst of light that lasts a few weeks to a few months, sometimes even years. Together, the pair of stars is called a cataclysmic variable.

In contrast, a dwarf nova happens in the same kind of system as a classical nova, but for a different reason. This type of nova occurs when the disc around the white dwarf becomes unstable causing an outburst that is much less powerful and bright than a classical nova. These outbursts last only a few days, but happen more frequently.

The cataclysmic variable SOFIA observed – V1047 Cen, a white dwarf and its Sun-like companion – erupted as a classical nova in 2005 (Nova Centauri 2005). But 14 years later, in April 2019, the system slowly started to re-brighten.

On days 88 and 89 after V1047 Cen began to brighten again, a team of researchers led by Dr. Elias Aydi, an astronomer at Michigan State University, used the FORCAST camera aboard SOFIA to analyze the system. They initially thought the re-brightening was indicative of a dwarf nova, but, unlike dwarf novae, this one kept going for quite a while.

“The thing about dwarf novae is they usually happen relatively quickly. The majority of them tend to rise to peak quickly and then decline quickly, they don’t spend a lot of time at the peak,” Aydi said. As far as we know, the longest dwarf nova cases have been around 100 days. V1047 Cen went on for 400. “If this was a dwarf nova, it would be a record-breaking one.”

Understanding the temperature of the gas around the system is typically an important clue as to what is going on. In this case, the researchers used the SOFIA spectra to reveal the temperature, which showed heating as a result of the outburst, helping to prove it was more than a typical dwarf nova.

With features inconsistent with both classical novae and dwarf novae, the astronomers tried to come up with an alternate explanation for this unusual event.

Supplementing the SOFIA data, the group also conducted observations using nearly a dozen other instruments, covering much of V1047 Cen’s 400-day event. Taken together, the data started to make more sense, and they realized they had come across something unique – a new type of stellar outburst that had never been seen before in this type of system. The discovery uncovers new scenarios that can take place in these types of cataclysmic variables.

“It’s definitely not a classical nova, but definitely something more than a dwarf nova. It’s something in between, and likely a combination of different processes or outbursts,” Aydi said.

Such combinations of outburst are often referred to as combination novae and have been observed to take place in systems that feature a white dwarf and a giant companion star, but there’s no evidence of a giant star in V1047 Cen — if there were, we would be able to see it. Instead of a giant star, the white dwarf in V1047 Cen has a Sun-like companion. In addition, the observed characteristics of the outburst are not exactly like those seen in combination novae. This makes the 2019 outburst of V1047 Cen quite an exotic one — the first of its kind ever to be seen in a cataclysmic variable system that has undergone a recent classical nova eruption.

Finding out what caused this outburst is key to understanding V1047 Cen, and potentially other similarly unusual outbursts that might be discovered in the future. One of the primary steps will be determining how quickly the white dwarf and its Sun-like companion are orbiting their center of mass, which will require additional observations.