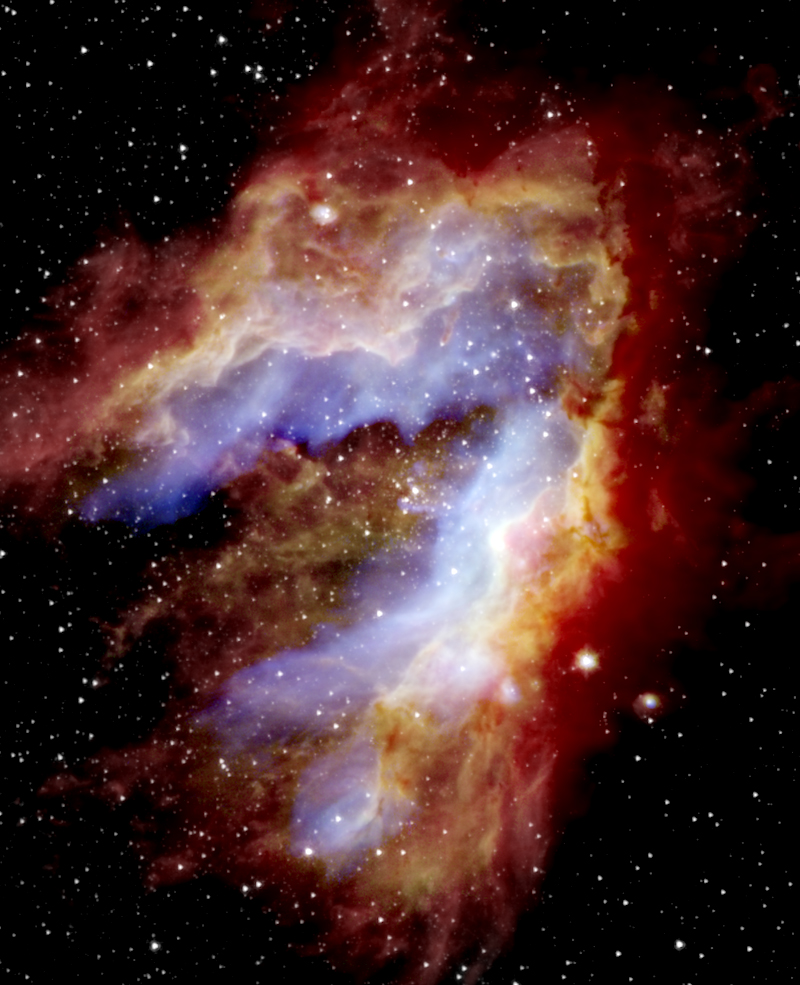 Composite image of the Omega Nebula. SOFIA detected the blue areas (20 microns) near the center, revealing gas as it’s heated by massive stars located at the center, near the bend, and the green areas (37 microns) that trace dust as it’s warmed both by massive stars and nearby newborn stars. The nine never-before-seen protostars were found primarily in the southern areas. The red areas near the edge represent cold dust that was detected by the Herschel Space Telescope (70 microns), while the white star field was detected by the Spitzer Space Telescope (3.6 microns). The space telescopes could not observe the blue and green regions in such detail because the detectors were saturated. SOFIA’s view reveals evidence that parts of the nebula formed separately to create the swan-like shape seen today. Image credit: NASA/SOFIA/De Buizer/Radomski/Lim;NASA/JPL-Caltech; ESA/Herschel

Though astronomers have been studying swan nebula for 250 years, the new SOFIA image reveals never-before-seen details of the Swan, or Omega Nebula. This is the most detailed infrared view of the nebula, revealing features that previous observations with space telescopes could not see, including massive stars at their earliest stages of evolution. Scientists found nine areas where the nebula is collapsing and will one day form stars, called protostars, that had never been seen before. The study also found evidence that the nebula was not all formed at the same time, but has undergone multiple eras of formation that are responsible for its present, swan-like appearance.

One of the brightest and most massive star-forming regions in our galaxy, the Omega or Swan nebula, came to resemble the shape resembling a swan’s neck we see today only relatively recently. New observations reveal that its regions formed separately over multiple eras of star birth. The new image from the Stratospheric Observatory for Infrared Astronomy, or SOFIA, is helping scientists chronicle the history and evolution of this well-studied nebula.

According to, Wanggi Lim, a Universities Space Research Association scientist at the SOFIA Science Center at NASA’s Ames Research Center in California’s Silicon Valley “The present-day nebula holds the secrets that reveal its past, we just need to be able to uncover them”. “SOFIA lets us do this, so we can understand why the nebula looks the way it does today.”

Uncovering the nebula’s secrets is no simple task. It’s located more than 5,000 light years away in the constellation Sagittarius. Its center is filled with more than 100 of the galaxy’s most massive young stars. These stars may be many times the size of our Sun, but the youngest generations are forming deep in cocoons of dust and gas, where they are very difficult to see, even with space telescopes. Because the central region glows very brightly, the detectors on space telescopes were saturated at the wavelengths SOFIA studied, similar to an over-exposed photo.

SOFIA’s infrared camera called FORCAST, the Faint Object Infrared Camera for the SOFIA Telescope, however, can pierce through these cocoons.

The new view reveals nine areas where the nebula’s clouds are collapsing, creating the first step in the birth of stars, called protostars, that had not been seen before. Additionally, the team calculated the ages of the nebula’s different regions. They found that portions of the swan-like shape were not all created at the same time, but took shape over multiple eras of star formation. The central region is the oldest, most evolved and likely formed first. Next, the northern area formed, while the southern region is the youngest, and was created most recently. Even though the northern area is older than the southern region, the radiation and stellar winds from previous generations of stars has disturbed the material there — preventing it from collapsing to form the next generation.

“This is the most detailed view of the nebula we have ever had,” said Jim De Buizer, a Universities Space Research Association senior scientist at the SOFIA Science Center at NASA’s Ames Research Center in California’s Silicon Valley. “It’s the first time we can see some of its youngest, massive stars, and start to truly understand how it evolved into the iconic nebula we see today.”

Massive stars, like those in the Swan nebula, release so much energy that they can change the evolution of entire galaxies. But, less than one percent of all stars are this enormous, so astronomers know very little about them. Previous observations of this nebula with space telescopes studied different wavelengths of infrared light, which did not reveal the details SOFIA detected.

SOFIA’s image shows gas in blue as it’s heated by massive stars located near the center, and dust in green that is warmed both by existing massive stars and nearby newborn stars. The newly-detected protostars are located primarily in the southern areas. The red areas near the edge represent cold dust that was detected by the Herschel Space Telescope, while the white star field was detected by the Spitzer Space Telescope.

The Spitzer Space Telescope will be decommissioned on January 30, 2020, after operating for more than 16 years. SOFIA continues exploring the infrared universe, studying wavelengths of mid- and far-infrared light with high resolution that are not accessible to other telescopes and helping scientists understand star and planet formation, the role magnetic fields play in shaping our universe, and the chemical evolution of galaxies.