SOFIA Helps Reveal Why Cosmic Bubbles Are Leaking Out Into Space

SOFIA Helps Reveal Why Cosmic Bubbles Are Leaking Out Into Space

Washington DC and Seattle WA—January 11, 2023. With thousands of tiny holes, Orion’s Veil — a bubble of gas and dust — is breaking sooner than expected, and SOFIA was the only observatory that could study why. 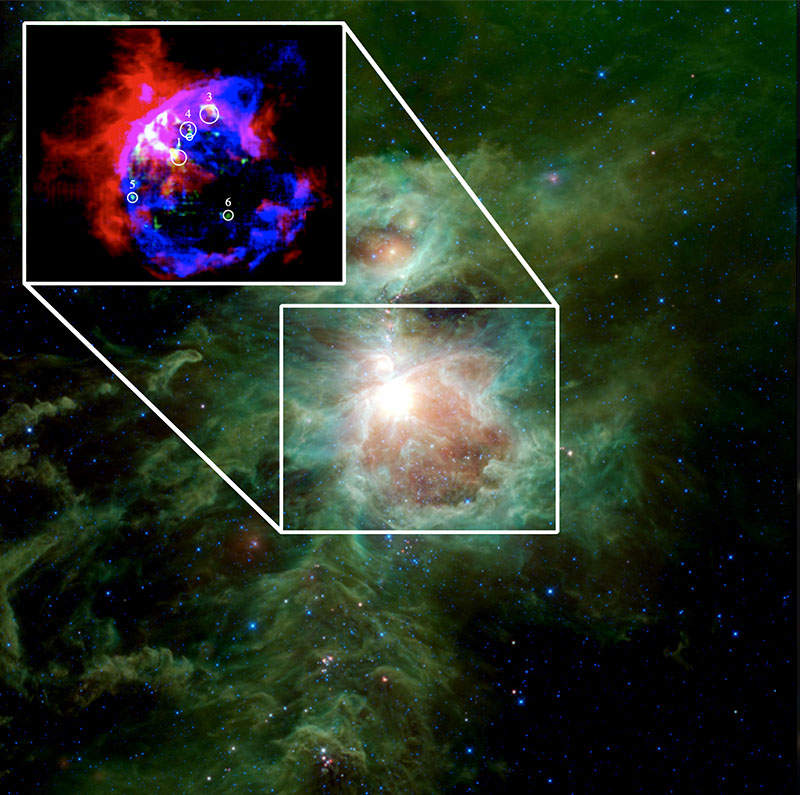 The background image shows the Orion nebula taken by the Wide-field Infrared Survey Explorer. Orion’s Veil shell is toward the center of this image, and the callout from this area shows a map of ionized carbon emission from the bubble measured by SOFIA. White circles in the callout indicate the position and size of shock-accelerated ionized carbon-emitting gas, which affect the morphology of the shell. Credit: Orion nebula: NASA/JPL-Caltech/WISE Team; Callout: NASA/SOFIA/Kavak et al.

Cosmic bubbles are blowing up earlier than expected, and research from the Stratospheric Observatory for Infrared Astronomy (SOFIA) can help explain why.

During the 241st meeting of the American Astronomical Society, which will be held at the Washington State Convention Center in Seattle, WA on Jan 8-12, Universities Space Reserach Association's  Umit Kavak will present his work on the role of stellar feedback in breaking up Orion’s Veil. His talk, “Protostellar feedback in massive star-forming regions,” will be featured in a press conference on Wednesday, January  11 at 10:15 AM PT.

In a previous study, Kavak and his collaborators found fossil outflows from the Trapezium Cluster of stars in Orion’s Veil — a bubble of dust and gas in our galaxy —  suggested the veil might be breaking. Now, they’ve found outflows actively ejected from protostars that are not as bright as the Trapezium stars. These protostellar outflows are also interacting with the bubble’s shell, allowing the researchers to study the process in more depth.

As stars from within the bubble eject material out, this material interacts with the shell. The bubble then becomes something more like a sieve, with tens of thousands of tiny holes from which gas can escape.

“Think of it like shooting a gun from thousands of different protostars, and all of them are just shooting in random directions,” Kavak said.

This process is important for astronomers to study because of the role it plays in the dynamics of bubbles like Orion’s Veil. Though they know the bubble will eventually blow up, there are many candidate mechanisms that can break it, such as radiation or hot gas from supernovae. This work provides evidence that outflows from massive protostars are a potential middle stage in the bubble’s evolution that can break the bubble up earlier than expected.

Furthermore, while ionized carbon has often been used to study outflows from grown stars, the results also show its utility in monitoring the outflows a star even before it is fully formed, and their impact. However, the Veil is difficult to study because of how thin and dense it is, and its structures can only be traced with ionized carbon observations. SOFIA was therefore unique in its ability to reveal this interaction, thanks to its spectral resolution and its ability to resolve the ionized carbon around protostars.

“There’s no way to study this anymore without SOFIA,” Kavak said. “We may trace structures perpendicular to our line of sight with other observations, but if the structure illuminated by a massive star is moving towards us, velocity-resolved ionized carbon observations are one-of-a-kind.”