Columbia, MD—September 13, 2021. With the help of the Stratospheric Observatory’s (SOFIA) FEEDBACK program, researchers obtained the first clear picture of how massive stars begin to form. 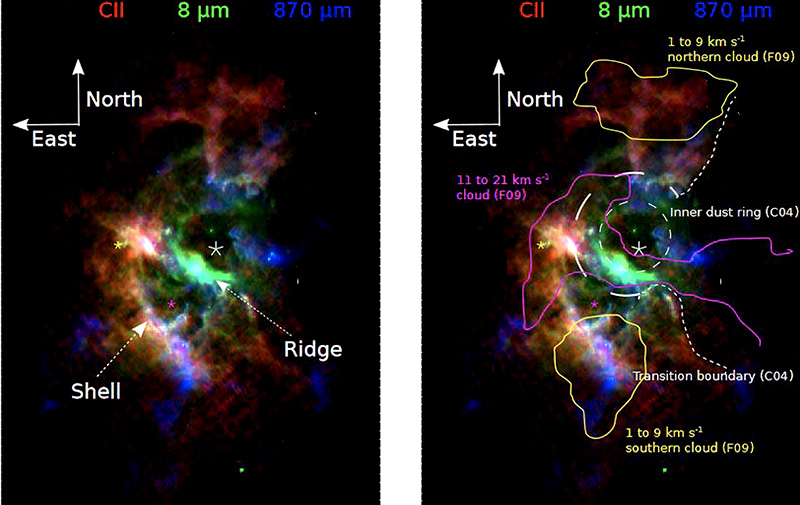 A color image of the emissions in RCW 49, the star-forming region of Westerlund 2. Credit: Tiwari et al.

Using the German REceiver for Astronomy at Terahertz Frequencies, or GREAT, in one of its advanced configurations called UpGREAT, SOFIA’s FEEDBACK program enabled high-resolution insights into the star-forming region called Westerlund 2 - one of the brightest and most massive star formation regions in the Milky Way. When massive stars begin to form, they emit large quantities of protons, electrons, and heavy atoms, which together are called stellar winds. In extreme cases, the stellar winds can create bubbles of hot plasma and gas in their surrounding clouds.

A postdoctoral researcher, Maitraiyee Tiwari, and her team at the University of Maryland, analyzed the star cluster Westerlund 2, and found the cluster is surrounded by one of these expanding bubbles of warm gas. They also identified the origin of this bubble, its size, and the energy that drives its expansion. The results were recently published in The Astrophysical Journal.

Tiwari and her team created the detailed picture of Westerlund 2 by measuring the radiation emitted by the star cluster across the entire electromagnetic spectrum, from high-energy X-rays to low-energy radio waves. Previous data in the radio and sub-millimeter wavelengths showed neither the bubble nor how it expanded into the surrounding gas.

The most important aspect of the current study is the far-infrared observation of ionized carbon at a wavelength of 157 µm, which can currently only be observed with SOFIA. Due to the expansion movement of the bubbles, the wavelength of this line is slightly stretched or compressed, which leads to a so-called red or blue shift - depending on whether a bubble is moving away from the Earth or toward it. Based on this wavelength shift, Tiwari and her colleagues were able to determine how a bubble is expanding. Combined with the measurements from the rest of the electromagnetic spectrum, observations from SOFIA results in a 3D view of the stellar wind around Westerlund 2.

The researchers also found evidence of the formation of new stars in the envelope region of Westerlund 2 bubble. According to their findings, the bubble ruptured about one million years ago, releasing hot plasma and slowing the expansion of its envelope. After another two hundred to three hundred thousand years, however, another particularly bright star – called the Wolf-Rayet star – developed in Westerlund 2, and its strong winds re-stimulated the bubble, leading the process of expansion and star formation to begin once again.

Stars – albeit less massive ones – will continue to be born in this shell for a very long time.

CAPTION: A color image of the emissions in RCW 49, the star-forming region of Westerlund 2. Credit: Tiwari et al.