Columbia, MD and Mountain View, CA. April 3, 2019.  Researchers on SOFIA captured a cosmic light show sparked by the formation of gigantic stars -- detecting many for the first time. 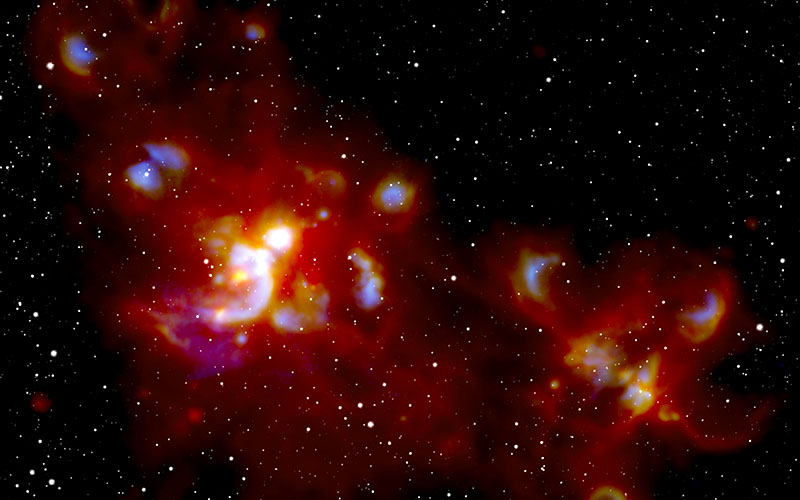 Forming stars glow in orange, purple and blue in front of a black and white star field

“Massive stars like this represent less than one percent of all stars, but they can affect the formation of their stellar siblings,” said Jim De Buizer, Universities Space Research Association senior scientist at the SOFIA Science Center. “Stars like our Sun have much quieter and humbler origins, and because there are so many of them, we understand their birth properties more thoroughly.”

To learn more, researchers used the Stratospheric Observatory for Infrared Astronomy, or SOFIA, to study a giant celestial cloud, called W51. Located almost 17,000 light years away and made mostly of hydrogen, it’s a place where rare, gigantic stars are forming. But they are born deep inside the cloud, invisible to the light our eyes can see. Using SOFIA’s airborne telescope and sensitive infrared camera, the research team peered inside the dense cloud. They captured a cosmic light show sparked by the forming stars, including many that have never been seen before.

The infrared camera, called Faint Object infraRed CAmera for the SOFIA Telescope, or FORCAST, has sensitive detectors and powerful magnification that let the researchers discover the enormous stars right after their birth. Learning how massive stars form in our Milky Way Galaxy helps scientists understand how these stars form in distant galaxies that are too far away to see in detail.

“This is the best resolution currently available using these wavelengths of infrared light,” said Wanggi Lim, Universities Space Research Association scientist at the SOFIA Science Center. “Not only does this reveal areas that we could not see before, but it’s critical to understanding the physical properties and relative age of the stars and their parental clouds.”

Researchers combined the SOFIA data with data from NASA’s Spitzer Space Telescope and Herschel Space Observatory to analyze the stars. They found that while they are all young, some are more evolved, and others are the youngest, most recently-created stars in the cloud. One may be exceptionally large — estimated to have the equivalent mass of 100 Suns. If future observations confirm it is indeed a single, colossal star, rather than multiple stellar siblings clustered together, it would be one of the most massive forming stars in our galaxy.

These are the first results from a survey that will reveal how young, massive stars are lighting up other parts of our Milky Way Galaxy.

SOFIA, the Stratospheric Observatory for Infrared Astronomy, is a Boeing 747SP jetliner modified to carry a 106-inch diameter telescope. It is a joint project of NASA and the German Aerospace Center, DLR. NASA’s Ames Research Center in California’s Silicon Valley manages the SOFIA program, science and mission operations in cooperation with the Universities Space Research Association headquartered in Columbia, Maryland, and the German SOFIA Institute (DSI) at the University of Stuttgart. The aircraft is maintained and operated from NASA’s Armstrong Flight Research Center Hangar 703, in Palmdale, California.

Founded in 1969, under the auspices of the National Academy of Sciences at the request of the U.S. Government, the Universities Space Research Association (USRA) is a nonprofit corporation chartered to advance space-related science, technology and engineering. It operates scientific institutes and facilities and conducts other major research and educational programs, under Federal funding from NASA, the Air Force Research Laboratory, the Department of Energy, and other agencies. USRA engages the university community and employs in-house technical leadership and project management expertise. The governance of USRA is grounded in 110 major research universities. More information about USRA is available at www.usra.edu.