Columbia, MD—February 4, 2021. NASA’s Stratospheric Observatory for Infrared Astronomy (SOFIA) will conduct its first-ever series of observations from Germany in February and March,  2021. Many of the observations seek to answer fundamental questions in astronomy, including how stars can transform galaxies and what is the origin of cosmic rays in the Milky Way galaxy. 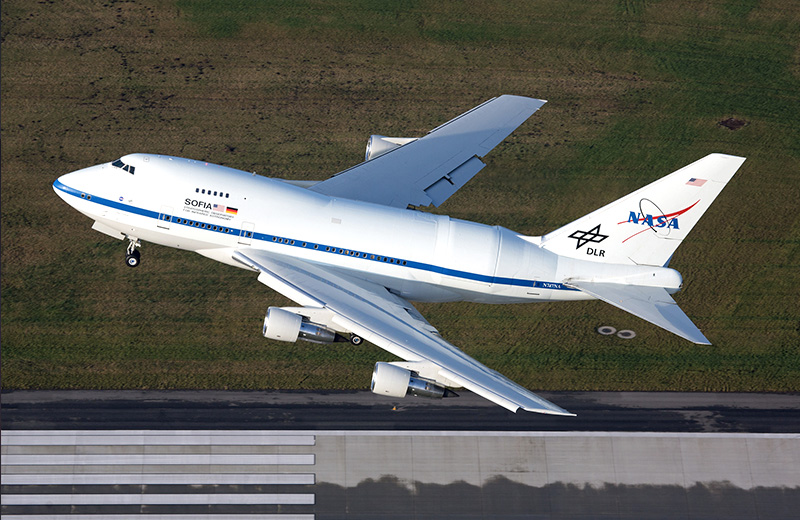 SOFIA, a joint project of NASA and the German Aerospace Center, DLR, recently completed scheduled maintenance and telescope upgrades at Lufthansa Technik’s facility in Hamburg, Germany. Now, the observatory will take advantage of its proximity to science teams at the Max-Planck Institute of Radio Astronomy in Bonn and the University of Cologne, which operate the Instrument called German Receiver at Terahertz Frequencies, or GREAT, to conduct research flights from the Cologne Bonn Airport.

“We're taking advantage of SOFIA’s ability to observe from almost anywhere in the world to conduct compelling astronomical investigations,” said Paul Hertz, director of astrophysics at NASA Headquarters in Washington. “This observing campaign from Germany is an excellent example of the cooperation between NASA and DLR that has been a strength of the SOFIA program for over 25 years.”

SOFIA regularly goes to Christchurch, New Zealand, to study objects only visible in the skies over the Southern Hemisphere and completed one science flight from Germany in 2019. But this is the first time a multi-flight observing campaign will be conducted over European soil. Over the course of six weeks, SOFIA will conduct about 20 overnight research flights that will focus on high priority observations, including several large programs that were rescheduled from spring 2020 due to the COVID -19 pandemic.

With new COVID-19 safety procedures in place, SOFIA will use its GREAT instrument, to search for signatures of celestial molecules, ions and atoms that are key to unlocking some of the secrets of the universe.

How Stars Affect Their Surroundings

In stellar nurseries like Cygnus X, newborn stars can destroy the clouds in which they’re born. Researchers will use SOFIA to create a map of ionized carbon, a gas the young stars are heating, to better understand this process. Ionized carbon’s chemical fingerprint can determine the speed of the gas at all positions across the celestial clouds. The signal is so strong that it reveals critical details that are otherwise hidden from view deep inside natal clouds. The data may also help explain the source of the mysterious bubble-like structures that were detected by the Herschel Space Observatory and Spitzer Space Telescope but have yet to be fully understood.

Searching for Clues About Cosmic Rays

The team will search for gases that can reveal the presence of cosmic rays, highly energetic charged particles that stream through our Milky Way galaxy. When a hydrogen atom combines with another element, such as argon or oxygen, simple molecules called hydrides are formed, some of which can be used to find cosmic rays. While cosmic rays can be detected directly within our solar system, astronomers know much less about their presence elsewhere in space. By measuring the concentration of hydride molecules, SOFIA’s observations will help researchers understand how common cosmic rays are in different parts of our galaxy, providing clues about the origin of these mysterious particles.

Understanding the Evolution of The Cigar Galaxy, or M82

SOFIA previously found that the Cigar galaxy's powerful wind, driven by the galaxy's high rate of star birth, is aligned along the magnetic field lines and transports a huge amount of material out of the galaxy. Now, researchers will study ionized carbon gas, which traces star formation, to learn how this intense star birth and wind are affecting the evolution of the galaxy.

SOFIA’s GREAT instrument works like a radio receiver. Scientists tune to the frequency of the molecule they’re searching for, like tuning an FM radio to the right station. The instrument can also look for changes in signals that provide insights into how stars affect their surroundings, similar to how a radar gun bounces a signal off a moving car to determine its speed.