Columbia, MD—May 31, 2022. Modern astronomy relies on understanding the life cycle of molecular material, and though astronomers understand much of the process, there are a lot of missing pieces. By studying six hydride molecules in 25 regions of the Milky Way, data from the Stratospheric Observatory for Infrared Astronomy (SOFIA) is helping to fill in some of the gaps, namely, how molecular clouds form and evolve. 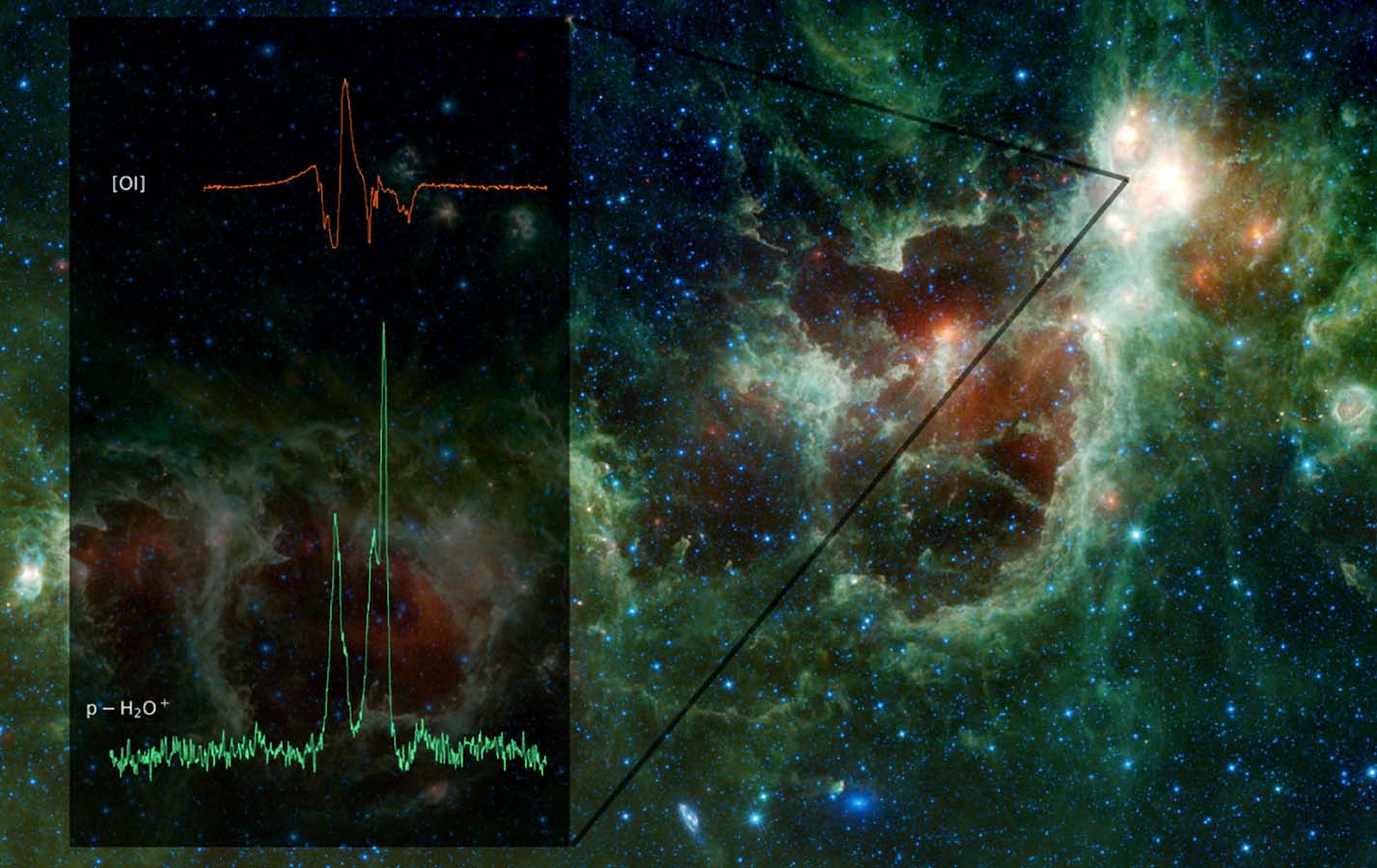 W3, one of the 25 Milky Way regions the Hydrides in the Galaxy project will study, is seen as the glowing white area in the upper right of this image of the Heart and Soul Nebulae, taken by NASA’s Wide-field Infrared Survey Explorer (WISE). SOFIA looked at the abundances of six hydride molecules in W3, the spectra of two of which are shown in the box at left. Credit: Nebulae: NASA/JPL-Caltech/UCLA; Spectra: Jacob et al.

Arshia Jacob, an astronomer at Johns Hopkins University outlines the life cycle process of molecular material “diffuse atomic gas becomes dense molecular gas, which ultimately forms stars and stellar systems, and continues to evolve over time, and yet there is a lot we don’t understand.”

Jacob, the lead author on a recent paper published in the Astrophysical Journal used SOFIA in   characterizing the interstellar medium in the Milky Way to fill in some of these missing pieces. By studying six hydrides, which are molecules or molecular ions in which one or more hydrogen atoms are bound to a heavier atom through shared electron pairs, Jacob and her collaborators hope to better understand how molecular clouds form and evolve.

Hydrides are useful to astronomers because they are very sensitive tracers of different phases of the interstellar medium, and their chemistry is relatively straightforward. Moreover, hydride observations provide measurements of the amount of material present.

The multi-investigator SOFIA project Hydrides in the Galaxy (HyGAL) uses a diverse selection of hydride molecules, allowing different processes to be monitored while complementing other observations. For example, one of the hydrides studied, argonium, can only form in regions that are almost purely atomic gas, so detecting argonium is indicative of a low molecular content in its surrounding environment. Other hydride molecules can indicate the presence of dense gas, intense cosmic radiation, turbulence, and more.

“Hydrides are small, but we can understand so much from them. Small molecules, big impact,” Jacob said.

In the first stage of the project, the group compared the hydride abundances in three regions of the Milky Way: two star-forming regions, W3(OH) and W3 IRS5, and a young stellar object, NGC 7538 IRS1. Though the average properties of these first three sources are similar, the full HyGAL project plans to study a total of 25 regions. With the remaining 22 sources covering distances from the inner galaxy all the way to the outer galaxy, they expect vastly different results.

“The sources are very different: Some of them are older, some have more chemical enrichment, some are younger and still forming stars,” Jacob said. “All of these will affect the nature of molecules that are formed, like their abundances, for example.”

Moving away from the galactic center, the transitions from atomic to molecular gas change, and the cosmic ray ionization rates vary vastly, which will result in differences in the ratios of molecules present and other properties. This will help astronomers understand the diversity of environments within the Milky Way.

“Imagine you’re moving into a cloud. At each stage, you’re seeing different molecules, reflecting changes in the cloud properties as it gets denser,” Jacob said. “Through this project, we’re filling in the properties of this transition.”

Currently, there have only been a handful of bright sources emitting a broad range of radiation that have been studied in this way, all concentrated in the inner galaxy. The SOFIA data will more than double the existing data, providing additional answers about the structure, dynamics, and chemistry of these clouds and where the dense material comes from.

SOFIA is the only facility presently capable of accessing the frequency range necessary for these observations at the required resolution. The German REceiver Astronomy at Terahertz Frequencies (GREAT) instrument aboard SOFIA allows five frequencies to be monitored simultaneously, each tuned to five of the six hydrides in question to determine the makeup of the cloud sources. These are complemented by studies at radio wavelengths with observatories such as the Karl G. Jansky Very Large Array near Socorro, New Mexico.