Salty Liquids on Mars – Present, but not habitable?

Salty Liquids on Mars – Present, but not habitable?

Houston, TX and Columbia, MD—May 11, 2020. Several recent observations of Mars have hinted that it might presently harbor liquid water, a requirement for life as we know it. However, in a new paper in Nature Astronomy, a team of researchers have shown that stable liquids on present-day Mars are not suitable environments for known terrestrial organisms. (https://astronomycommunity.nature.com/users/394217-edgard-g-rivera-valentin/posts/salty-water-everywhere-nor-any-drop-to-drink).

“Life on Earth, even extreme life, has certain environmental limits that it can withstand,” noted Dr. Edgard G. Rivera-Valentín, a Universities Space Research Association (USRA) scientist at the Lunar and Planetary Institute (LPI) and lead author of the investigation. “We investigated the distribution and chemistry of stable liquids on Mars to understand whether these environments would be suitable to at least extreme life on Earth.”

Due to Mars’ low temperatures and extremely dry conditions, should a liquid water droplet be placed on Mars, it would nearly instantaneously either freeze, boil, or evaporate away. That is unless that droplet had dissolved salts in it. Such salt water, or brine, would have a lower freezing temperature and would evaporate at a slower rate than pure liquid water. Because salts are found across Mars, brines could form there. “We saw evidence of brine droplets forming on the strut of the Phoenix lander, where they would have formed under the warmed spacecraft environment”, noted Dr. Germán Martínez, a USRA scientist at the LPI, co-investigator of the Mars 2020 Perseverance rover, and co-author of the study. 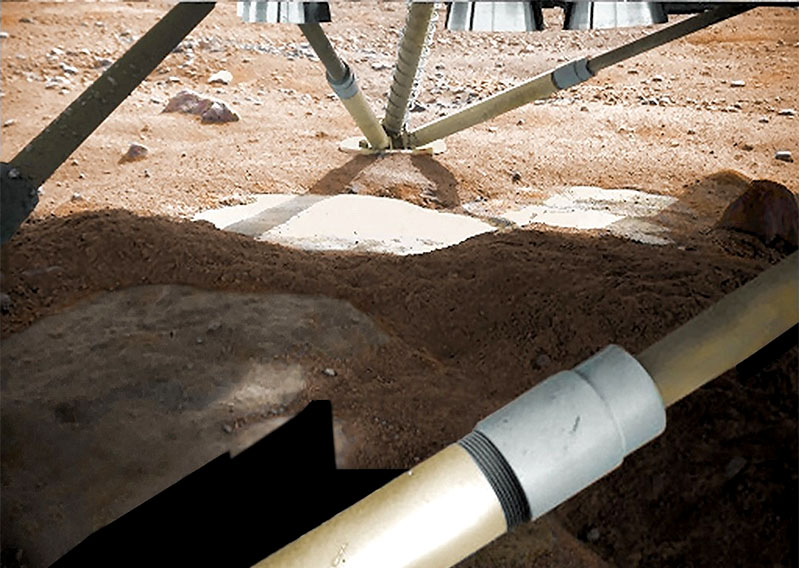 Further, some Martian salts can undergo a process called deliquescence. When a salt is at the right temperature and relative humidity, it will take in water from the atmosphere to become a salty liquid. “We’ve been conducting experiments under Martian simulated conditions at the University of Arkansas for many years now to study these types of reactions. Using what we’ve learned in the lab, we can predict what will likely happen on Mars,” says Dr. Vincent Chevrier, co-author of the investigation at the University of Arkansas.

The team of researchers used laboratory measurements of Mars-relevant salts along with Martian climate information from both planetary models and spacecraft measurements. They developed a model to predict where, when, and for how long brines are stable on the surface and shallow subsurface of Mars. They found that brine formation from some salts can lead to liquid water over 40% of the Martian surface but only seasonally, during 2% of the Martian year.

“In our work, we show that the highest temperature a stable brine will experience on Mars is -48°C (-55° F). This is well below the lowest temperature we know life can tolerate,” says Dr. Rivera-Valentín. “For many years we have worried about contaminating Mars with terrestrial life as we have sent spacecraft to explore its surface. These new results reduce some of the risk of exploring Mars,” noted Dr. Alejandro Soto at the Southwest Research Institute and co-author of the study.

“We have shown that on a planetary scale the Martian surface and shallow subsurface would not be suitable for terrestrial organisms because liquids can only form at rare times, and even then, they form under harsh conditions. However, there might be unexplored life on Earth that would be happy under these conditions,” added Dr. Rivera-Valentín. More environmental data from Mars, such as through the upcoming Mars 2020 mission to Jezero crater, along with further exploration of Earth’s biome may shed some light on the potential to finding life on Mars today.