Returning to New Zealand: SOFIA Travels to Christchurch for a Seventh and Final Time

Returning to New Zealand: SOFIA Travels to Christchurch for a Seventh and Final Time

Columbia, MD—June 18, 2022. After a two-year hiatus, the Stratospheric Observatory for Infrared Astronomy, SOFIA, has returned to Christchurch, New Zealand, for a long deployment.  About once a year, SOFIA temporarily moves its operating home to better observe celestial objects in the Southern Hemisphere. 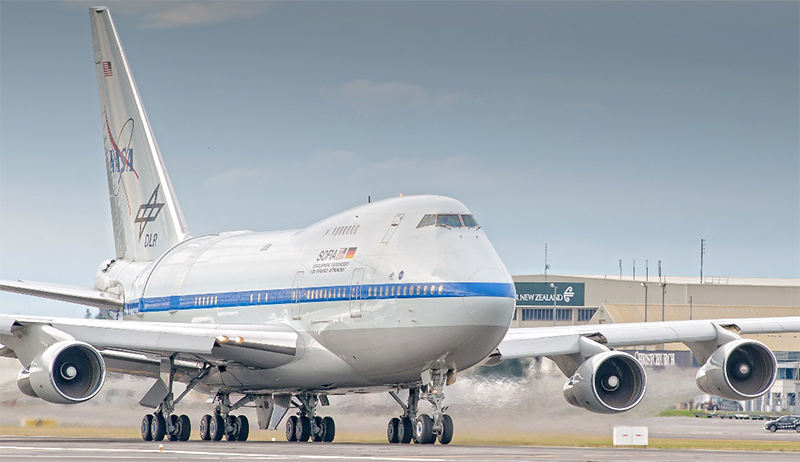 SOFIA taxiing on the ramp at Christchurch International Airport in 2017. Credits: NASA/SOFIA/Waynne Williams

To meet the high demand from the SOFIA scientific community to observe the southern skies, SOFIA has been setting out from various places in the Southern Hemisphere. This year, SOFIA already deployed once to Santiago, Chile, for a quick, two-week deployment to observe the Large Magellanic Cloud. Now,  SOFIA is heading back to New Zealand for the seventh and final time.

“We are thrilled to be returning to Christchurch to continue to study and discover the infrared universe,” said Naseem Rangwala, the SOFIA project scientist.

SOFIA has made 12 deployments over its operational lifetime, generally leaving Palmdale, California, to observe celestial objects and phenomena not visible from its home skies. It observed occultations in Florida and New Zealand, as well as atomic oxygen in Earth’s atmosphere, stellar feedback, and magnetic fields from German soil.

Christchurch is often SOFIA’s home away from home when deploying overseas. This time, SOFIA plans to conduct 32 flights to observe a wide range of celestial objects and phenomena, like cosmic magnetic fields, stellar feedback, and cosmic rays, using two instruments, HAWC+ and GREAT.

Stars Blowing Bubbles and a Barometer for Cosmic Rays

After HAWC+ finishes up probing the magnetic universe, SOFIA’s operations team will swap the instrument for the German PI-led instrument, GREAT. GREAT does a wide variety of studies including looking at stellar feedback - the way some stars can affect the regions around them. Young, massive stars create huge winds that blow out into the surrounding dusty material, sometimes blowing celestial bubbles. As they do this, the stellar winds plow into the material and sometimes can trigger or quench star formation. Scientists want to understand when and why star formation is turned on or off.

GREAT, like the radio in your car, can be tuned to be sensitive to specific signals. During the New Zealand deployment, it will be set to register hydride molecules. These molecules are some of the first types that formed in our universe, and, even now, they are sometimes created in other environments. When scientists detect hydrides, they can use them as sensitive barometers for the presence of cosmic rays, high energy particles that travel close to the speed of light.

Hydride molecules form in very specific circumstances, and, usually, scientists can determine their production rate. At the same time, these molecules are quite delicate and can easily be destroyed by passing cosmic rays. Understanding the balance between their production and destruction can provide clues to the abundance of cosmic rays.

Many of the key celestial objects for astronomers, like the center of the Milky Way, are either visible only from the Southern Hemisphere or more easily observed from these latitudes. Two years after SOFIA achieved first light in 2010, the observatory made its first trip to New Zealand. Now, ten ears later and with six previous trips to Christchurch, this will be SOFIA’s last international deployment.

NASA and DLR recently announced the conclusion of the SOFIA Mission. SOFIA will operate for the rest of fiscal year 2022, before entering an orderly shutdown process on October 1, 2022.

“We are committed to delivering a strong finish for this unique astrophysics mission, from a place of strength and pride, by giving our scientific community as much data as possible from the Southern Hemisphere,” Dr. Rangwala said. Moving forward, SOFIA's data will be available in NASA's public archives for astronomers worldwide to use.

While in New Zealand, SOFIA will observe magnetic fields in our galaxy, the Milky Way, pictured here from a previous study with another SOFIA instrument. Credits: NASA/SOFIA/JPL-Caltech/ESA/Herschel