Preparing Future Explorers for a Return to the Moon

Preparing Future Explorers for a Return to the Moon

Houston, TX and Columbia, MD—October 19, 2018. To train future explorers to support NASA’s mission to return to the Moon’s surface, scientists use similar environments found on the Earth. Last week, a group of domestic and international students traveled to Barringer Meteorite Crater, Arizona (aka Meteor Crater) to learn necessary skills that could help NASA implement its plans for human and robotic missions to the lunar surface. 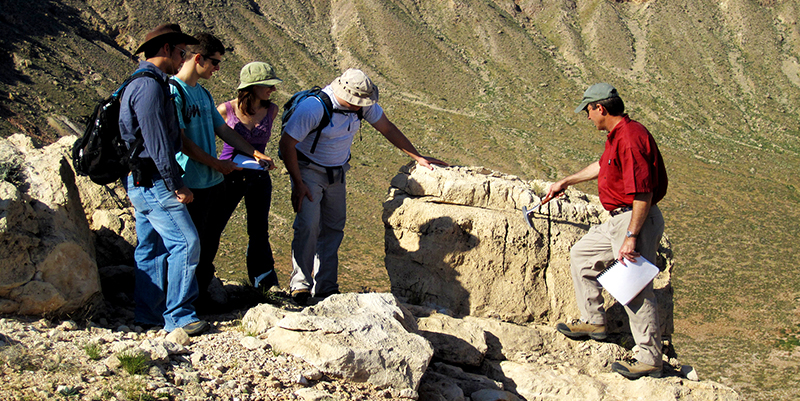 Dr. David Kring, a Universities Space Research Association scientist at the Lunar and Planetary Institute (LPI), created the training program to instruct postdoctoral researchers and graduate students studying impact craters on the Earth, the Moon, Mars, and elsewhere. Dr. Kring has been engaged in studies of Meteor Crater for decades and has trained post-Apollo astronauts there.

The Field Training and Research Program at Meteor Crater is a week-long geology field class that introduces students to impact cratering processes and provides an opportunity to assist with a research project at the crater. The crater represents the type of terrain lunar explorers will encounter on the Moon’s surface and was, for that reason, an important training site for Apollo astronauts.

In the training program just completed, sixteen students mapped the distribution of rocky debris ejected from the crater by an impacting asteroid. This kind of debris, when found around a similar crater on the Moon, is the type of material an astronaut would collect for return to Earth for scientific analysis.

The program, supported by NASA’s Solar System Exploration Research Virtual Institute (SSERVI), is an important training component of the Center for Lunar Science and Exploration (CLSE), a joint venture between the LPI and NASA’s Johnson Space Center. This is the fifth edition of the training program and nearly 100 students have participated since 2010.

“SSERVI is very proud to have supported the LPI Meteor Crater Field Camp, a key bastion of geologic field research on impact cratering processes and of particular importance as our agency plans for a return to the Moon”, says SSERVI Director Greg Schmidt. “We are particularly proud of the ‘impact’ this activity has had on training the next generation of explorers and building international relationships through the fascinating science and exploration potential of this unique location.”

This student activity is made possible with the generous assistance of the Barringer Crater Company and Meteor Crater Enterprises.

The importance of Meteor Crater in the history of lunar exploration is currently being recognized as part of Flagstaff, Arizona’s Lunar Legacy program, which is a year-long celebration of the 50th anniversary of the Apollo 11 landing on the Moon.

About LPIThe Lunar and Planetary Institute (LPI), operated by Universities Space Research Association, was established during the Apollo missions to foster international collaboration and to serve as a repository for information gathered during the early years of the space program. Today, the LPI is an intellectual leader in lunar and planetary science. The Institute serves as a scientific forum attracting world-class visiting scientists, postdoctoral fellows, students, and resident experts; supports and serves the research community through newsletters, meetings, and other activities; collects and disseminates planetary data while facilitating the community’s access to NASA science; and engages and excites, and educates the public about space science and invests in the development of future generations of explorers. The research carried out at the LPI supports NASA’s efforts to explore the solar system.