Orion’s Veil Comes Out of Its Shell

Orion’s Veil Comes Out of Its Shell

Columbia, Maryland—July 14, 2022. The Stratospheric Observatory for Infrared Astronomy (SOFIA) discovered that Orion’s Veil—an expanding shell consisting of dust and gas in front of the massive star cluster in the Orion Nebula—might be breaking. 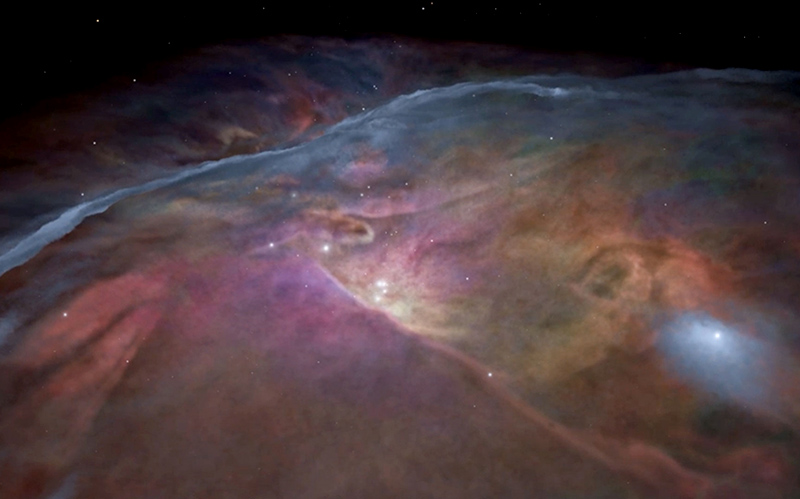 Within the Orion Nebula is a massive set of stars known as the Trapezium stars. The winds from the Trapezium stars blow a bubble of dust and gas in the area in front of them, called Orion’s Veil. The majority of Orion’s Veil is sparse, with most of its gas lying in the bubble’s wall. The wall, or Orion’s Veil shell, is about a light-year thick and expanding toward us – and recent observations by SOFIA's German REceiver for Astronomy at Terahertz Frequencies (GREAT) have identified some unexpected features in it.

“The bubble – with a diameter of approximately seven light-years – should be an almost sphere-like structure, but we found a protrusion in its northwestern part,” said Ümit Kavak, a postdoctoral researcher at SOFIA based out of NASA’s Ames Research Center in California’s Silicon Valley, who is the lead author on a recent paper in Astronomy & Astrophysics describing the studies.

The SOFIA observations show ionized carbon emission in this protrusion, which Kavak used to determine its size, structure, and how it is expanding, in hopes of uncovering its origins and future.

Shaped like a “U” lying on its side, the protrusion extends well beyond Orion’s Veil shell. It is a likely spot for the shell to pierce, and the protrusion’s chimney-like top seems to imply it already has. 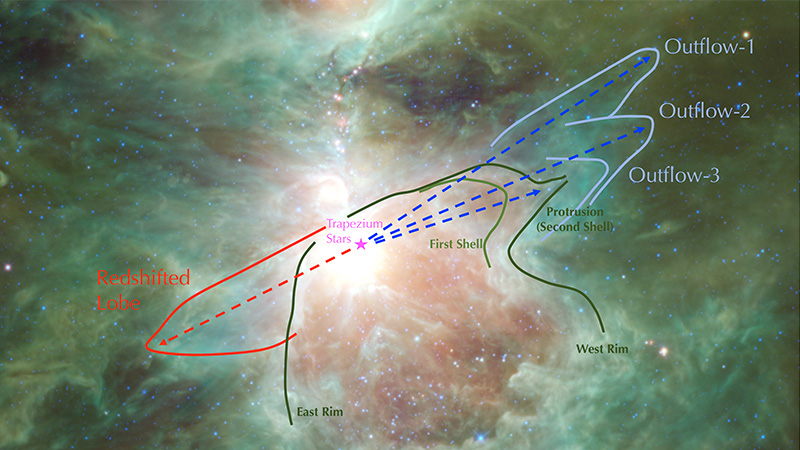 Schematic picture of the protrusion (green lines, center right) and outflows of ionized carbon extending beyond the protrusion – where the shell has likely been pierced – overlaid on a Wide-field Infrared Survey Explorer image of the region. Credit: NASA/JPL-Caltech/WISE Team; Kavak et al.

“When you breach the Veil shell, you effectively start stirring a cosmic soup of gas and dust by adding turbulence,” Kavak said.

“This isn't the most appetizing soup, but it's one of the ways to form new stars or limit future star formation,” added Alexander Tielens, a researcher at Leiden University and a co-author on the paper.

This turbulence affects the density, temperature, and chemistry of its surrounding region, which may ultimately lead to the creation or destruction of star formation sites.

The group also identified a second, weaker protrusion, which they plan to investigate further in a future publication. Together, these protrusions affect the entire morphology of the Orion Nebula.