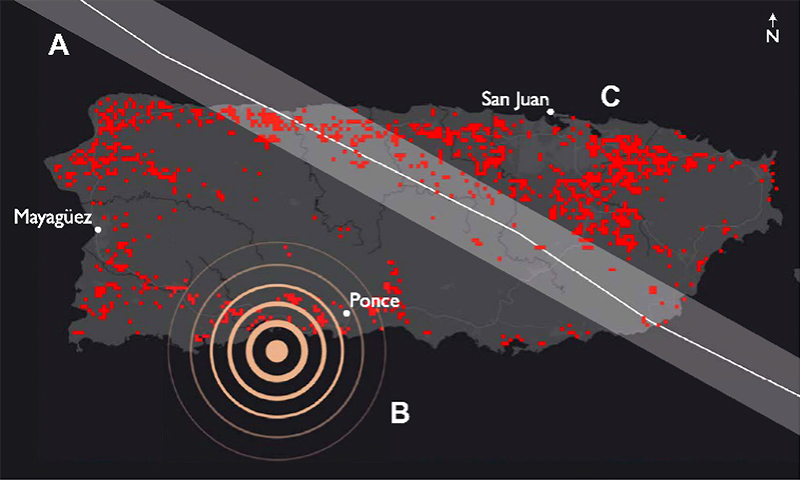 Map of the main island of Puerto Rico, showing two Recurrent Acute Disasters (RADs). (A) Hurricane Maria (2017) caused major energy infrastructure damage; (B) the 2020 earthquake series in the south of Puerto Rico caused immediate and widespread power outages in the earthquake zone and (C) the already vulnerable northern portion of the island.

Yet, disaster research has largely focused on individual and isolated disaster events, rather than on RADs, severely limiting the utility and predictive capacity of emergency management and preparedness actions. A better understanding of RADs is critical to improve preparedness, disaster management, response and recovery and community resilience.

To address this issue, a group of scientists, from Clemson University, Universities Space Research Association and Cary Institute of Ecosystem Studies worked together to construct a new novel framework to improve the scientific understanding of RADs and created a conceptual model of how RADs affect the human ecosystem. They demonstrate how valuable and important a new framework like this will be in the future. Analyzing the post disaster conditions defined as “legacy conditions” this team applied the framework they created to Puerto Rico, that provides a useful measure to understand RADs. The results were published in the March 9 issue of Science Advances.

The research is an important new step towards understanding the complex characteristics of legacy conditions created by one disaster that influence the effects of subsequent disasters. The study shows that RADs create a cascade of consequences associated with previous disasters as was the case with Hurricane Irma, followed by the destruction caused Hurricane Maria, then a subsequent drought, and the January 2020 Earthquakes.

The researchers show that subsequent acute disasters are a function of:

The former Director of USRA’s Earth from Space Institute (EfSI), and a co-author on the study, Dr. Miguel Roman, noted that “The situation in Puerto Rico since 2017 has led to what we define as negative legacy conditions, including a deteriorating energy infrastructure, public loss of trust in government institutions, and a health care system under immense strain. Because legacy conditions have differential impacts upon vulnerable communities, issues of equity and environmental justice (EEJ) can also be better addressed by RAD-sensitive disaster and recovery policies.”

Moving forward, it will be necessary for the disaster management community working with scientists engaged in RAD research to convert the RAD-based predictions of legacy conditions into specific preparedness actions that reduce vulnerability to subsequent disasters. The research group is working toward developing new visualization tools that could be used to accurately display RADs. Increasing our understanding of RADs has the potential to advance disaster science, improve disaster response, build resilience to future disasters, and save lives.

About USRA
Founded in 1969, under the auspices of the National Academy of Sciences at the request of the U.S. Government, the Universities Space Research Association (USRA), is a nonprofit corporation chartered to advance space-related science, technology and engineering.  USRA operates scientific institutes and facilities, and conducts other major research and educational programs. USRA engages the university community and employs in-house scientific leadership, innovative research and development, and project management expertise. More information about USRA is available at www.usra.edu.

About Clemson University
One of the most productive public research universities in the nation, Clemson University enrolls 27,341 students and has an endowment of over $1 billion.  Classified as an R1 — Very High Research University by the Carnegie Foundation for the Advancement of Teaching — Clemson is dedicated to teaching, research and service. Its main campus, located in Upstate South Carolina, sits on 1,400 acres in the foothills of the Blue Ridge Mountains, along the shores of Lake Hartwell. Through the research, outreach, and entrepreneurial projects led by our faculty and students, Clemson University is driving economic development and improving the quality of life in South Carolina and beyond. For more information, go to clemson.edu

About Cary Institute of Ecosystem Studies
Cary Institute of Ecosystem Studies is an independent nonprofit center for environmental research. Since 1983, its scientists have been investigating the complex interactions that govern the natural world and the impacts of climate change on these systems. Its research findings lead to more effective management and policy actions and increased environmental literacy. Staff are global experts in the ecology of cities, disease, forests, and freshwater."

Additional Resources:
The paper is available at http://advances.sciencemag.org/