No Phosphine on Venus--According to Observations from SOFIA

No Phosphine on Venus--According to Observations from SOFIA

Washington, DC—November 29, 2022.  After the 2020 announcement of the discovery of phosphine above Venus’s clouds, the  Stratospheric Observatory for Infrared Astronomy (SOFIA), conducted follow-up observations to confirm or refute the finding. Its observations did not find phosphine in Venus’s atmosphere which is a potential biomarker and could be an indicator of organic matter, or life. 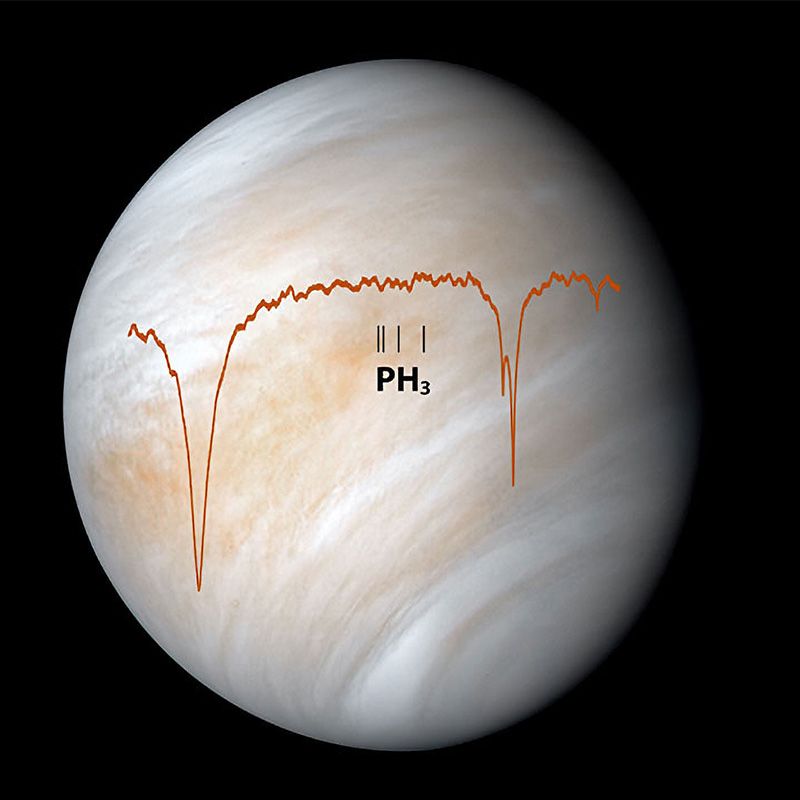 The spectral data from SOFIA overlain atop this image of Venus from NASA’s Mariner 10 spacecraft is what the researchers observed in their study, showing the intensity of light from Venus at different wavelengths. If a significant amount of phosphine were present in Venus’s atmosphere, there would be sharp dips in the graph at the four locations labeled “PH3,” similar to but less pronounced than those seen on the two ends. Credit: Venus: NASA/JPL-Caltech; Spectra: Cordiner et al.

Venus is considered Earth’s twin in many ways, but, thanks to SOFIA,  the one difference now seems clearer: Unlike Earth, Venus does not have any obvious phosphine.

Phosphine is a gas found in Earth’s atmosphere, but the announcement of phosphine discovered above Venus’s clouds made headlines in 2020. The reason was its potential as a biomarker. In other words, phosphine could be an indicator of life. Though common in the atmospheres of gas planets like Jupiter and Saturn, phosphine on Earth is associated with biology. Here, it’s formed by decaying organic matter in bogs, swamps, and marshes.

“Phosphine is a relatively simple chemical compound — it’s just a phosphorus atom with three hydrogens — so you would think that would be fairly easy to produce. But on Venus, it’s not obvious how it could be made,” said Martin Cordiner, a researcher in astrochemistry and planetary science at NASA’s Goddard Space Flight Center in Greenbelt, Maryland.

There may be other potential ways to form phosphine on a rocky planet, like through lightning or volcanic activity, but none of these apply if there simply isn’t any phosphine on Venus. And according to SOFIA, there isn’t.

Following the 2020 study, a number of different telescopes conducted follow-up observations to confirm or refute the finding. Cordiner and his team followed suit, using SOFIA in their search.

The researchers didn’t see any sign of phosphine. According to their results, if there is any phosphine present in Venus’s atmosphere at all, it’s a maximum of about 0.8 parts phosphine per billion parts everything else, much smaller than the initial estimate.

Pointing SOFIA’s telescope at Venus was a challenge in and of itself. The window during which Venus could be observed was short, about half an hour after sunset, and the aircraft needed to be in the right place at the right time. Venus also goes through phases similar to the Moon, making it difficult to center the telescope on the planet. Add in its proximity to the Sun in the sky — which the telescope must avoid — and the situation quickly became tense.

“You don’t want sunlight accidentally coming in and shining on your sensitive telescope instruments,” Cordiner said. “The Sun is the last thing you want in the sky when you’re doing these kinds of sensitive observations.”

Despite the fact the group did not find phosphine after the stressful observations, the study was a success. Along with complementary data from other observatories that vary in the depths they probe within Venus’s atmosphere, the SOFIA results help build the body of evidence against phosphine anywhere in Venus’s atmosphere, from its equator to its poles.

Founded in 1969, under the auspices of the National Academy of Sciences at the request of the U.S. Government, the Universities Space Research Association (USRA) is a non-profit corporation chartered to advance space-related science, technology and engineering. As an integrated partner, USRA facilitates and amplifies partnerships between universities, the government and industry focusing on targeted activity for the purpose of planning and conducting future multidisciplinary research.  It also operates scientific institutes and facilities, manages major research and educational programs.