Columbia, MD--June 7, 2021.  For the first time, one of the largest X-ray surveys using the European Space Agency’s XMM-Newton space observatory has captured the growth of supermassive black holes at the core of more than ten thousand galaxies.

A multi-year effort, the XMM-SERVS findings are documented in a paper describing the latest part of the now-completed survey by Qingling Ni and W. Niel Brandt from Penn State University, Chien-Ting Chen from Universities Space Research Association (USRA), and an international team of co-authors. The paper has been submitted to The Astrophysical Journal Supplement.

"Only some of the most extreme environments in the Universe can produce enough high energy X-ray photons we see from distant galaxies, that's why X-ray surveys are the best way we have for studying the supermassive black holes located in the center of most massive galaxies. said Chen, a USRA scientist at Marshall Space Flight Center who led the first XMM-SERVS paper in 2018, and a co-author of the submitted paper. "The completion of this huge undertaking is especially exciting because it brings us information from supermassive black holes in all kinds of galaxies living in different cosmic environments that was not available before."

The new XMM-SERVS survey helps to fill the gap between deep pencil-beam X-ray surveys and shallow X-ray surveys over large sky areas. The XMM-SERVS survey provides medium-deep X-ray coverage for three widely separated sky fields that have previously been studied at multiple wavelengths. Additionally, these regions have been selected as Deep-Drilling Fields of the Legacy Survey of Space and Time (LSST) to be conducted by the Vera C. Rubin Observatory.

The LSST Deep-Drilling Fields are sky regions where substantially more observations will be obtained compared to typical sky regions during the ten-year LSST survey, enabling new scientific discoveries. The XMM-SERVS survey fields are also the sites of multiple other upcoming surveys at radio, submillimeter, infrared, and optical wavelengths. One of the XMM-SERVS survey fields is also among the Deep Fields to be surveyed by the Euclid, a European space mission scheduled to be launched in 2022. Thus, the X-ray coverage provided by XMM-SERVS has enormous legacy value in conjunction with these other rich datasets.

“These sky fields span a wide variety of cosmic environments,” said Ni, a graduate student at Penn State University and lead author of the submitted paper. “So, we are getting a view of supermassive black hole growth that is hopefully unbiased by local cosmic factors. Additionally, over the past decade astronomers have established that there is a strong correlation between black-hole growth and the properties of galaxies, but the limited sample size restricted these studies to proper investigation of only a few galaxy parameters. Our new large sample of growing supermassive black holes will allow us to look at many more galaxy parameters together.”

“This survey represents key foundational work upon which, I suspect, hundreds of studies will be built over the next decade or two,” said Brandt, Verne M. Willaman Professor of Astronomy and Astrophysics and professor of physics at Penn State, and one of the leaders of the study. “XMM-Newton was the best mission to gather these data, and we needed to invest a lot of observation time for this study— with a total combined exposure of nearly 60 days—because it will be so important for active galaxy studies, galaxy cluster studies, and for understanding large-scale structures in the universe. It required a multiyear, multinational effort and it’s incredibly gratifying to get it done. We are most grateful to the European Space Agency and NASA for their long-term support of this work.” 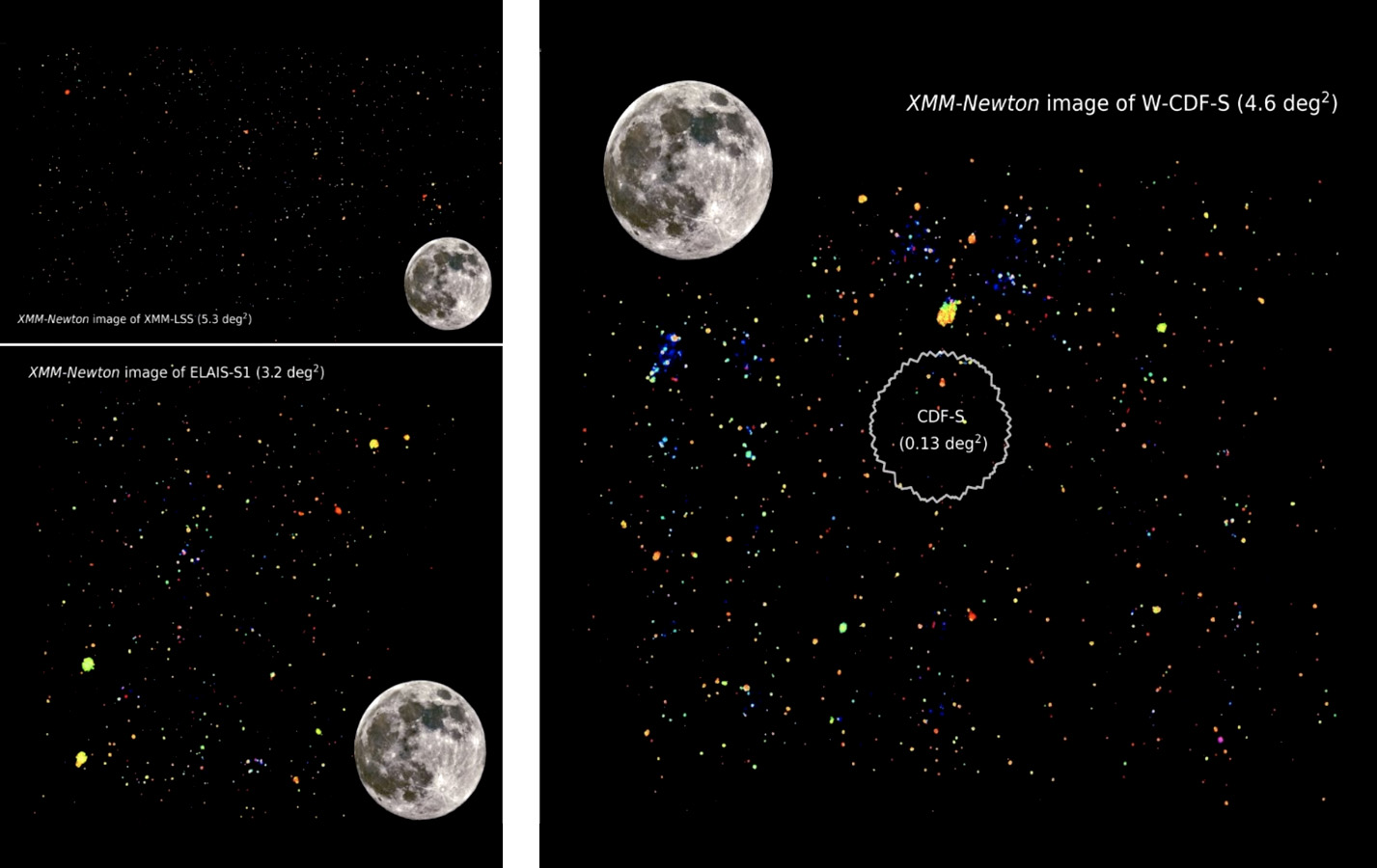 XMM-Newton images of the three XMM-SERVS fields including XMM-LSS (5.3 square-degree, top-left. The work in this field was led by Chen and was published in Chen et al. 2018), ELAIS-S1 (3.2 square-degree, bottom-left), and W-CDF-S (4.6-square-degree, right), which reveal the sensitive view of the X-ray sky provided by XMM-Newton. The detected sources, most of which are growing supermassive black holes, are color coded according to the energies of the X-rays detected (with red having the lowest energies and blue the highest). The image highlights how XMM-SERVS has now provided sensitive panoramic X-ray imaging around this survey. The three XMM-Newton images cover an area about 60-times larger than the apparent size of the full moon, shown to scale in each image. Image credit: ESA/NASA. Ni et al. (2021)/ Chen et al. (2018).

This effort was sponsored by the European Space Agency (ESA) and NASA.