Columbia, MD and Houston, TX—August 2, 2022. A recent study reports evidence of deformation in the oldest solids formed in our solar system resulting from nebular shocks. The results of this work suggest that these shocks may have been active and more widespread in the early solar system than previously thought. The study was published in Geochimica et Cosmochimica Acta. 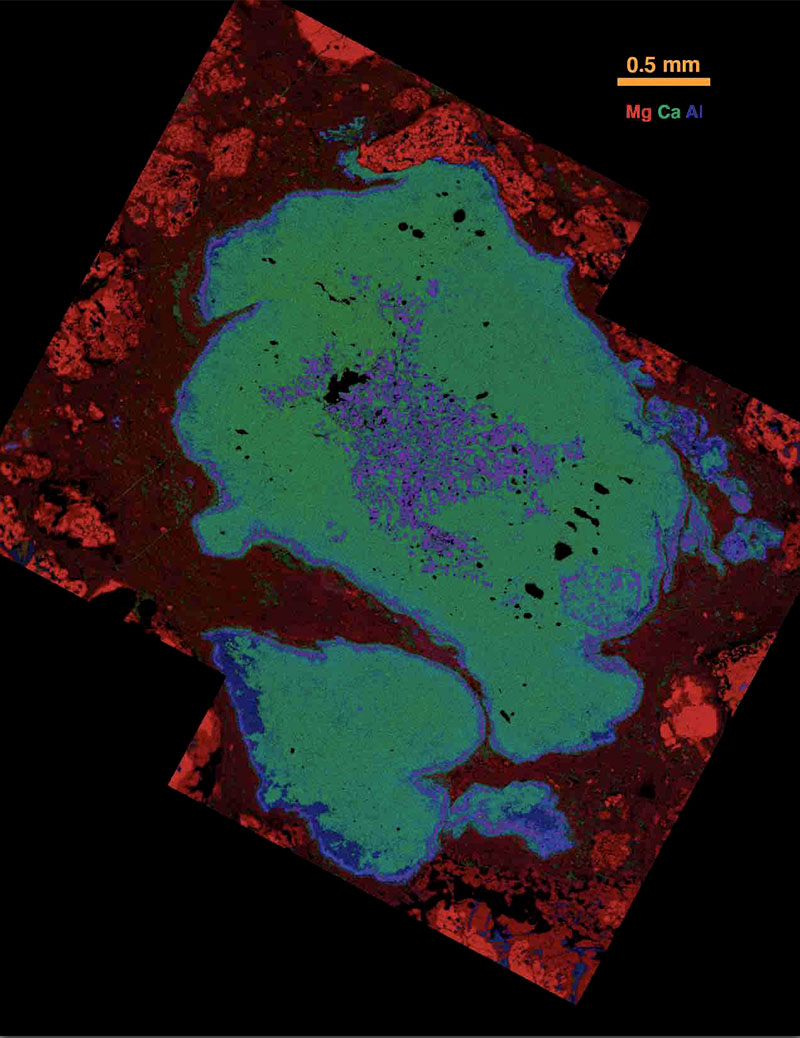 Calcium-aluminum-rich inclusions (CAIs) are millimeter- to centimeter-sized objects hosted in primitive meteorites. They are the oldest solids to have condensed from the nebular gas and, therefore, preserve records of the earliest chemical and physical processes. A recent study of a CAI from NWA 5028 CR2 chondrite suggests that some CAIs may have experienced nebular shocks at early stages of the solar system history.

"CAIs are made of minerals forming at high temperatures, rich in refractory elements such as calcium and aluminum. Radiometric dating of CAIs and their components suggest that majority of these inclusions formed within the first million years of our solar system history and thus preserve the snapshots of the earliest events at the very beginnings of our solar system," says Prajkta Mane, lead author of the study, and a Universities Space Research Association scientist at the Lunar and Planetary Institute.

"These CAIs represent, to the best of our knowledge, the first solids that formed in the solar system. We believe that they experienced large-scale transport in our early solar nebula and witnessed a range of physical and chemical processes over their lifetimes. This study is the first to constrain timescales with physical processing by shockwaves," says Tom Zega, a coauthor of the study.

A coordinated analysis of a CAI hosted in a carbonaceous chondrite revealed intensely deformed microstructures in melilite and spinel, suggesting that it was shocked at an elevated ambient temperature. Further time constraints on this event, placed by 26Al-26Mg short-lived chronometry, revealed that the shock event occurred very early, within the first few hundred thousand years of the solar system history. Nebular shock waves are thought to be responsible for the melting of chondrules, major chondritic components rich in ferromagnesian minerals. However, shock deformation in CAIs implies that nebular shocks may have been more common in the early solar system than previously thought. Many studies using optical microscopy and transmissions electron microscopy have reported that CAI melilite shows microstructures consistent with significant strain and deformation, providing some clues about their tortured past. The EBSD analytical technique provides a more comprehensive and quantitative view of this deformation. "The microscopy techniques combined with the isotopic analysis provide a holistic understanding of these events," said the study's lead author, Prajkta Mane.

This work was in collaboration with the Lunar and Planetary Institute (USRA), Arizona State University, University of Arizona, and EDAX Ametek.

Founded in 1969, under the auspices of the National Academy of Sciences at the request of the U.S. Government, the Universities Space Research Association (USRA) is a nonprofit corporation chartered to advance space-related science, technology, and engineering. USRA operates scientific institutes and facilities and conducts other major research and educational programs. USRA engages the university community and employs in-house scientific leadership, innovative research and development, and project management expertise. More information about USRA is available at www.usra.edu.

The Lunar and Planetary Institute (LPI), operated by Universities Space Research Association, was established during the Apollo program in 1968 to foster international collaboration and to serve as a repository for information gathered during the early years of the space program. Today, the LPI is an intellectual leader in lunar and planetary science. The Institute serves as a scientific forum attracting world-class visiting scientists, postdoctoral fellows, students, and resident experts; supports and serves the research community through newsletters, meetings, and other activities; collects and disseminates planetary data while facilitating the community's access to NASA science; and engages, excites, and educates the public about space science and invests in the development of future generations of explorers. The research carried out at the LPI supports NASA's efforts to explore the solar system. More information about LPI is available at www.lpi.usra.edu.