For the first time, scientists can look at landslide threats anywhere around the world in near real-time, thanks to satellite data and a new model developed by NASA's team that includes USRA's Thomas Stanley.  The model estimates potential landslide activity triggered by rainfall.   Click the following for more information.

The image below is a data visualizaion that shows a close-up view of the potential landslide activity during July in Southeast Asia as evaluated by NASA's Landslide Hazard Assessment model for Situational Awareness. Overlaid on top are reported landslide fatalities dating back to 2007. 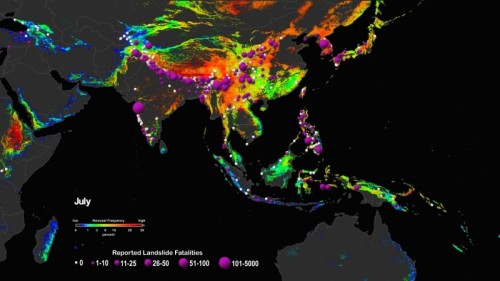