Columbia, MD – June 7, 2021.  A new study suggests that all solar eruptions may share the same physical characteristics, differing mainly by the size and scale at which they occur. 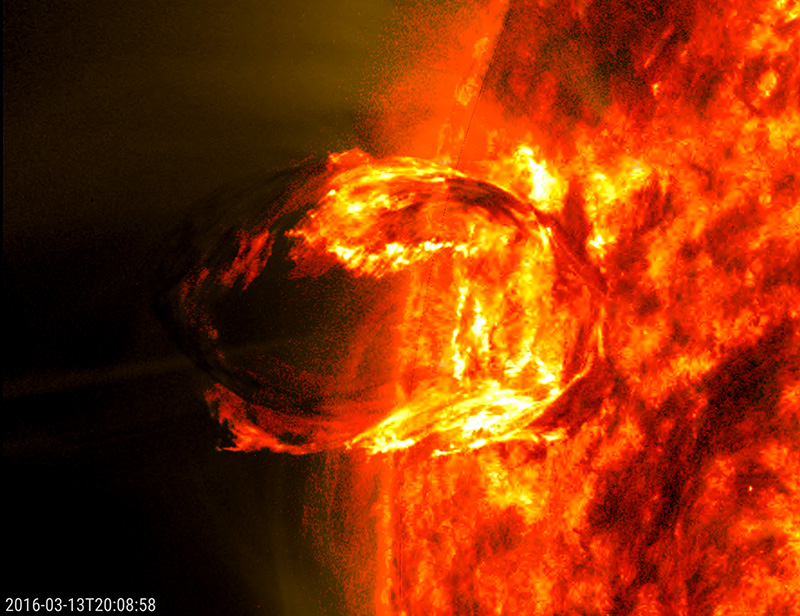 SDO Atmospheric Imaging Assembly 304 A image of the failed portion of the eruption on March 13, 2016. The rough circle visible on the surface is the footprint of the prominence, and the loops above it rose up from the surface over a period of 30 hours, first slowly and then at a rate approaching 400 km/s. The cool prominence plasma is shown here draining back down onto the other half of the circle. In a more classic jet or CME eruption, the loops at the top of the image would have become open via magnetic reconnection, and emptied the cool plasma into the solar wind. However, in this event the reconnection did not result in open field lines, and the plasma remained tied to the Sun. Image Credit: NASA.

Solar eruptions are commonly categorized as jets or coronal mass ejections, also known as CMEs. Jets are quite small, and send out simple, thin columns of plasma into the solar wind, but their diminutive size precludes any significant space weather effects. CMEs, on the other hand, can be very large and are the main concern of space weather researchers, since the strongly-structured plasma, magnetic fields, and radiation from CMEs can all wreak havoc on infrastructure and human lives. The research, presented at the virtual American Astronomical Society meeting in June 2021, shows that these two eruption types may simply be two ends of an eruption continuum.

Often, the seeds of a solar eruption are sown days or weeks in advance, when two oppositely-charged magnetic fields begin moving away from each other. Field lines that connect the two fields get stretched out by this process, which builds up a great deal of energy. Because this stretching leaves the field lines largely horizontal, they often fill with cool plasma, and become known as solar prominences. After a while, the accumulated energy in the prominence releases in an eruption powered by magnetic reconnection – a process by which magnetic fields can "break" and rearrange themselves. What begins the eruption is still not fully understood.

Dr. Emily Mason, lead author of the research paper and a NASA Postdoctoral Program fellow at NASA Goddard Space Flight Center in Greenbelt, MD, and her co-authors, Spiro Antiochos (emeritus, NASA Goddard Space Flight Center) and Angelos Vourlidas (JHU APL) used data from the Solar Dynamics Observatory (SDO) and the Solar-Terrestrial Relations Observatory – Ahead (STEREO-A) spacecraft to capture a medium-sized eruption from two angles. This eruption was composed of two parts: a cap-like dome of hot plasma lying on top of a ring of cool prominence plasma. The eruption was notable because it lies in between the size scales for a jet and a CME, and exhibited aspects of both. The cap of hotter plasma lifted off gently, in their analysis, and this created a CME with poor internal structure – too wide to be a jet, but too messy to be a classic CME. In an additional twist, the prominence under the erupted hot plasma rose as though it was going to erupt, but appeared to run out of energy and instead drained back to the surface. So-called failed eruptions happen on the Sun, but the mystery here is why the prominence failed.

"Usually, you can trace the cool plasma as it reconnects onto open field and escapes into the solar wind, but that just doesn't happen here," said Mason. "Instead, the cool plasma trained back down along the magnetic field, like cars on a roller coaster track." According to the current leading theories on eruptions, this structure should have had a fully successful eruption. "This event really acts like a Rosetta Stone" said Antiochos, "in that it connects all three major 'cultures' of eruptive events: CMEs, jets, and failed prominence ejections".

The next step is to study the structure using computer models, to see what combination of magnetic structure and driving processes can replicate the peculiar eruption dynamics. "Jets are relatively isolated magnetically, so solar physicists understand how they erupt from thorough previous studies. If we can essentially scale up what we already know about jet eruptions, we may gain important insights on how CMEs erupt as well," Mason said. However, the open question of why the prominence failed to erupt complicates prediction capabilities for space weather forecasters. This study and the upcoming model results will help determine what drives eruptions on the Sun, with the ultimate goal to be able to observe precursors and use this information consistently to predict disruptive space weather before it can cause damage.