Washington DC—January 16, 2023. In a paper published  in the Astrophysical Journal, scientists describe the discovery of an intermediate black hole buried in gas and dust in a dwarf galaxy.  The discovery of the dust-obscured black hole of a previously undiscovered size is exciting since it may help provide clues about how such black holes were seeded in the very early universe. 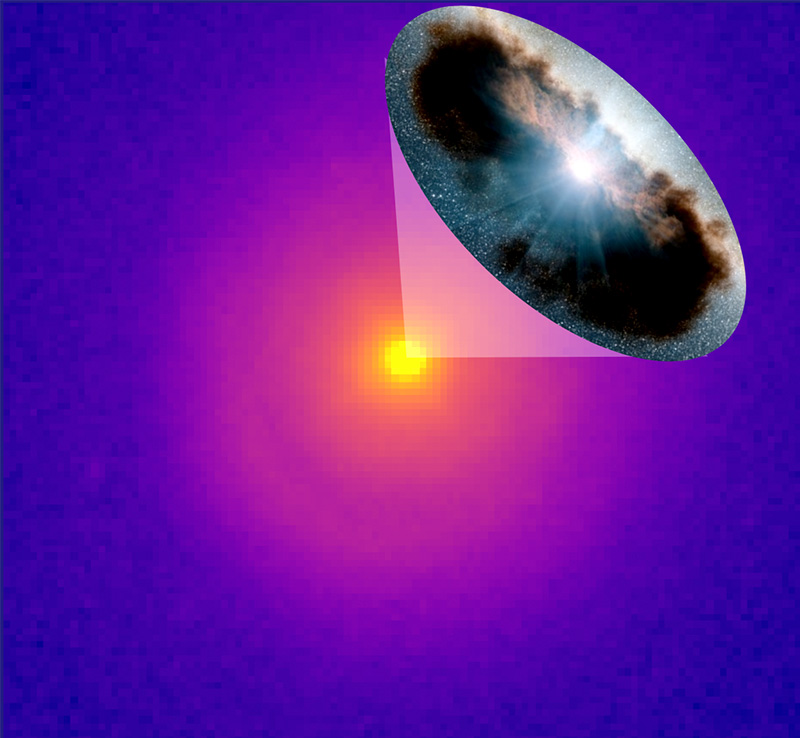 Dwarf galaxy J1440J144013+024744 as seen by NASA's Hubble Space Telescope. NASA's NuSTAR observatory picked up high energy X-ray signals from the activity of the massive black hole deeply hidden in the center of this dwarf galaxy, shown as an artist's conception in the zoomed in image. Image credit: NASA

Typically, galaxies have supermassive black holes at their centers, and astronomers can observe them as the surrounding gas and dust fall into them.

Using NASA's NuSTAR observatory to study a black hole containing 160,000 times the mass of the Sun in the center of the dwarf galaxy J144013+024744, Universities Space Research Association’s Dr. Chien-Ting Chen, who is the Principal Investigator, and Shrey Ansh, the lead author and graduate student at University of Alabama in Huntsville, found the black hole to be deeply buried by the gas and dust in the galaxy.

“Observationally, finding smaller black holes are harder because they are fainter, and it is even harder to find them when you add a substantial amount of intervening dust,” says Dr. Chen.

“We suspected this dwarf galaxy to hide a massive black hole because observations from NASA's Spitzer Observatory have showed the target to have strong mid infrared (IR) emission lines that could only be powered by very energetic photons coming from accreting massive black holes” stated Dr. Chen.  Mid-IR emission lines originate from regions that are further away from the black hole, and their wavelengths are longer than typical dust particles, making it possible to see them despite of the presence of dust.

“By targeting  J144013+024744 with NASA's NuSTAR telescope that can detect high energy X-ray photons with more penetrating power, we can  directly measure the amount of dust in our line of sight,’ noted Dr.  Chen.

Finding J144013+024744’s monster black hole to be actually buried behind a screen of dust is quite exciting, since the census of the prevalence of the monster black hole in dwarf galaxies is one of the few actually measurable constrains of how all these supermassive black holes were seeded in the very early Universe.

With the confirmation of the dust obscured monster in J144013+024744, scientists should have a better idea on how and where to look for more of these objects -- by combining hard X-ray and mid-IR emission line observations. Although Spitzer is no longer operating, it's got an even more powerful successor JWST. Combining JWST, NuSTAR and NASA's future hard X-ray missions, astronomers should be able to find more of these tiny monsters lurking in our cosmic neighborhood, and hence getting closer to have a complete census of the black hole population in dwarf galaxies.

Founded in 1969, under the auspices of the National Academy of Sciences at the request of the U.S. Government, the Universities Space Research Association (USRA) is a non-profit corporation chartered to advance space-related science, technology and engineering. As an integrated partner, USRA facilitates and amplifies partnerships between universities, the government and industry focusing on targeted activity for the purpose of planning and conducting future multidisciplinary research.  It also operates scientific institutes and facilities, manages major research and educational programs.