Massive Stars Are Factories for Ingredients to Life

Massive Stars Are Factories for Ingredients to Life

Columbia, Maryland—October 8, 2020. The Stratospheric Observatory for Infrared Astronomy (SOFIA), NASA’s flying observatory, has provided a new glimpse of chemistry surrounding massive young stars where future planets could begin to form. It found massive quantities of water and organic molecules in these swirling, disk-shaped clouds, offering new insights into how some of the key ingredients of life get incorporated into planets during the earliest stages of formation. 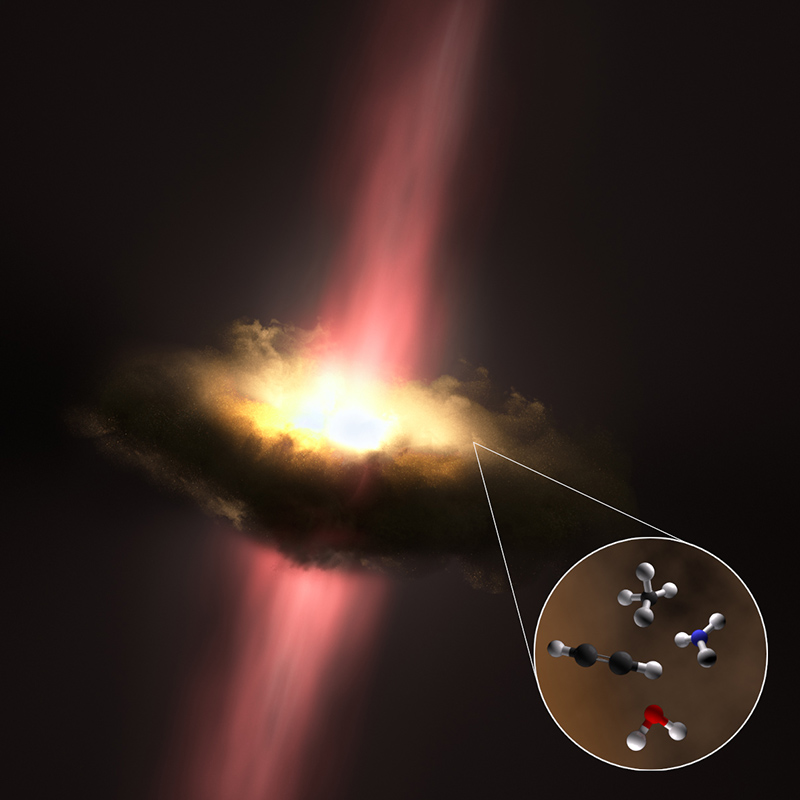 Illustration of a dusty disc rotating around a massive newborn star that’s about 40 times the size of the Sun. SOFIA, the Stratospheric Observatory for Infrared Astronomy, found the inner regions of two of these kinds of discs are filled with organic molecules that are important for life as we know it. These include water, ammonia, methane, and acetylene — which is a chemical building block to larger and more complex organic molecules — illustrated in the call out. Image credit : NASA, SOFIA.

A similar process likely happened during the formation of the Sun and the inner rocky planets of our solar system, including Earth. The results are published in the Astrophysical Journal.

“We’re seeing many more molecular signatures than were ever seen before at these wavelengths,” said Andrew Barr, the lead author of the study and a doctoral candidate at Leiden University in the Netherlands. “It turns out that these stars are like chemical factories churning out molecules important for life as we know it and we just needed the right kind of observations to see them.” SOFIA’s unique observations are enabling these scientific insights.

SOFIA’s infrared observations offer an unparalleled view of star chemistry. When visible light is spread into its component colors, a rainbow appears. When infrared light is broken into its components, it reveals a series of bright lines, called spectra. Each element creates a unique line, so the lines act as chemical fingerprints. Scientists use them to identify which substances are in and around stars. SOFIA’s instruments can detect small details in the chemical fingerprints from the cores of massive young stars, similar to how high-resolution images reveal tiny features. This information about massive stars, more than 40 times the mass of our Sun, can be a reference for NASA’s James Webb Space Telescope, which will study the formation of Sun-sized stars, among other types of targets

SOFIA’s instruments can detect small details in the chemical fingerprints from the cores of massive young stars, similar to how high-resolution images reveal tiny features. This information about massive stars, more than 40 times the mass of our Sun, can be a reference for NASA’s James Webb Space Telescope, which will study the formation of Sun-sized stars, among other types of targets.

“This study is very exciting as it demonstrates the power of infrared observatories to sense the presence of simple organic compounds that were important for the origin of life on Earth, and possibly other planets,” said Klaus Pontoppidan, project scientist for the Webb telescope at the Space Telescope Science Institute. “One of the most important goals of both Webb and SOFIA is to understand the origins of stars and planets — and ultimately ourselves.”

Stars form when celestial clouds collapse, feeding a rotating disc of gas and dust into a central core. SOFIA observed that this process is happening around two massive stars, AFGL 2591 and AFGL 2136, each about 3,000 light years away in the constellation Cygnus and the Juggler Nebula respectively. The observatory found the inner regions of these discs are heated from the inside out, transforming the gas surrounding the core into an entirely different composition. Within the same areas of the disc where planets would form there were a chemical soup of organic molecules, including water, ammonia, methane, and acetylene — which is a building block of larger and more complex organic molecules.

Further studies of other massive young stars by SOFIA will deepen our understanding of the processes creating organic molecules. As SOFIA’s observations indicate that massive star formation is a scaled-up version of what is occurring in smaller, Sun-sized stars, these new studies can be of benefit to James Webb Telescope. While Webb’s extremely sensitive telescope will be able to detect some of the weakest signals from molecules present around Sun-like stars, SOFIA can unambiguously identify the chemical composition of molecules glowing brightly around more massive stars. This will help scientists using Webb telescope observations to interpret the weaker signals.

SOFIA is a Boeing 747SP jetliner modified to carry a 106-inch diameter telescope. It is a joint project of NASA and the German Aerospace Center, DLR. NASA’s Ames Research Center in California’s Silicon Valley manages the SOFIA program, science, and mission operations in cooperation with the Universities Space Research Association headquartered in Columbia, Maryland, and the German SOFIA Institute (DSI) at the University of Stuttgart. The aircraft is maintained and operated from NASA’s Armstrong Flight Research Center Hangar 703 in Palmdale, California.

Adapted from the featrure by Kassandra Bell on NASA.gov