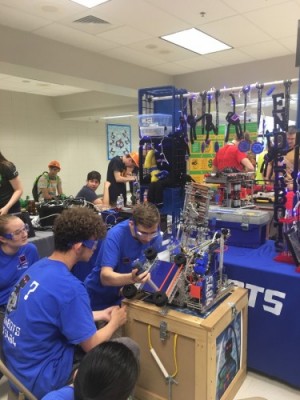 Columbia, MD. June 25, 2018.  The 2018 Maryland Tech Invitational (MTI) competition, hosted by the Universities Space Research Association's STEMAction Center, and sponsored by Triangle Education Foundation, and the Howard Tech Council Economic Development Authority, brought together 32 teams from across the nation and the world. These teams were selected based on their excellence in science, technology, engineering and math to compete in a robotics competition, and were required to design, build and program their robots to compete against other teams.

Congratulations to the winning alliance in this competition --Team 11115, Gluten Free, from Hollis, NH.  Other Alliance partners included Mechanical Paradox Cubed #7182 from Maryland,  and Cybots #5975 from Iowa

Over 400 attendees were at the event on June 23rd and 24th for the MTI competition. It was an impressive show of amazing engineering skills of high school students.

Later in the evening of the 24th, Universities Space Research Association hosted a social event that attracted 180 people and included activities such as viewing a Planetarium, enjoying a PlayStation and Pizza!