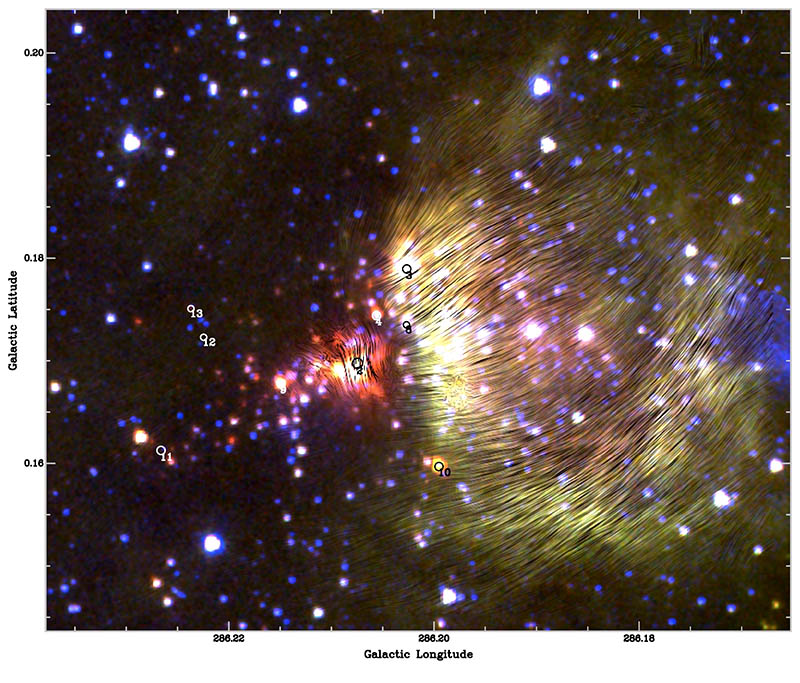 The magnetic field orientations of BYF 73, as derived from SOFIA, are overlain on a composite image of the region taken by the Spitzer Space Telescope and Anglo-Australian Telescope. The circled areas are locations of protostellar sources in the region identified by ALMA and the Gemini Observatory. Credit: NASA/Spitzer/SOFIA/ALMA/Gemini/AAT/Barnes et al.

During the 241st meeting of the American Astronomical Society, which will be held at the Washington State Convention Center in Seattle, WA on Jan 8-12, Peter Barnes will discuss his team’s work using SOFIA and ALMA to examine the magnetic fields in the star-forming cloud BYF 73. His talk, “SOFIA and ALMA Investigate Magnetic Fields and Gas Structures in Massive Star Formation: The Case of the Masquerading Monster in BYF 73,” will be featured in a press conference on Thursday, Jan 12 at 10:15 AM PT.

BYF 73 is not your typical star-forming cloud. It’s relatively small, but its central core holds the record for the highest known protostellar mass accretion rate, the process by which a young star accumulates mass from its surrounding material. Within this core lies a “masquerading monster”: a single protostar, MIR 2, which is about 1,300 times the Sun’s mass and responsible for about half of the region’s power output. These values place MIR 2 in the very early stages of massive star formation, with an age of around 40,000 years — on human timescales, it began forming sometime after the arrival of humans to Australia.

“It’s exciting because MIR 2 seems to be so young, and massive stars evolve very quickly by astronomical standards and are very rare, making their early stages easy to miss,” Barnes said.

The synergies between SOFIA and ALMA’s magnetic field studies allowed the researchers to determine the relationship between BYF 73’s magnetic field and gas density. Though both values are larger than is typical, the relationship between the two scales similarly to other clouds. This means BYF 73 isn’t necessarily something unique — it’s just massive, and its monstrous density compared to its small size may help astronomers uncover some kind of threshold necessary for gravity to take over and allow stars to form.

“The original discovery of the massive inflow of material was very exciting, since so few examples were known for higher-mass protostars. From that point, BYF is the gift that keeps on giving,” Barnes said.