Make No Bones About It: SOFIA Maps the First Magnetic Fields of a Galactic Bone in their Entirety

Make No Bones About It: SOFIA Maps the First Magnetic Fields of a Galactic Bone in their Entirety

Columbia, MD—April 5, 2022.  The Stratospheric Observatory for Infrared Astronomy (SOFIA) —a joint project of NASA and the German Space Agency at DLR—mapped the very first and most detailed map of the long filaments that outline the densest part of a galaxy’s arms (galactic bones).  It is the most detailed map of the magnetic fields of G47—a giant filamentary bone in the Milky Way.  The results were published in The Astrophysical Journal Letters. 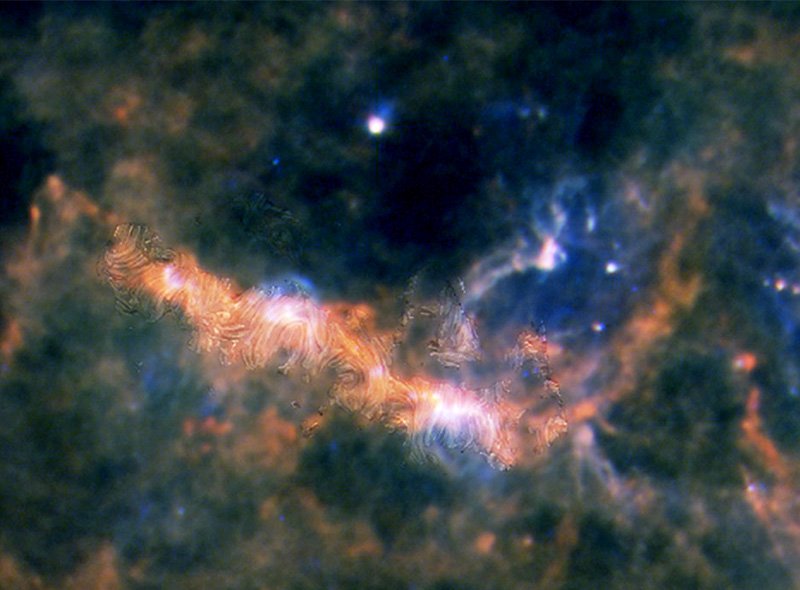 A map shows the direction of magnetic fields in the G47 bone overlain atop an image of the G47 filament as seen by the Herschel Space Observatory. The red and yellow areas are high-density regions of dust and gas. Credit: G47: ESA/Herschel/PACS/SPIRE/Ke Wang et al. 2015; Polarization map: Stephens et al., 2021.

At the largest scales, the magnetic fields of a galaxy follow its spiral arms. Fields in the bones were accordingly believed to be aligned with respect to the bone, but research from SOFIA  hints that this is generally not the case. The magnetic fields do not follow the spiral shape of the galaxy’s arms, nor are they in general perpendicular to the bones.

“Before SOFIA, it was difficult to image magnetic fields at high resolution over the entirety of the bones,” said Ian Stephens, an astrophysicist at Worcester State University and lead author of the paper.  “We are now able to get so many independent measurements of the magnetic field direction across these bones, allowing us to really delve into the importance of the magnetic field in these massive filamentary clouds.”

Stephens is part of the Filaments Extremely Long and Dark: a MAgnetic Polarization Survey (FIELDMAPS) project, the first attempt to map the magnetic field of any galactic bone in its entirety. Of the ten bones the group plans to map, the first project completed by FIELDMAPS is that of G47, a giant filamentary bone within the Milky Way that is 200 light-years in length and 5 light-years in width.

“Magnetic fields...can potentially set the rate at which stars form in a cloud. They can also guide the flow of gas, shape the bones, and affect the quantity and size of the densest pockets of gas that will eventually collapse to form stars,” Stephens said. “By mapping the orientation of the fields, we can estimate the relative importance of the magnetic field to that of gravity to quantify how much magnetic fields affect the star formation process.”

The researchers did just that and were able to determine that the magnetic fields are strong enough to prevent gas in many areas from succumbing to gravitational collapse to form stars. They found the magnetic fields in the G47 bone were complex, changing directions frequently – though in the densest areas, they trended perpendicular to the bone. This means the parallel fields from the less dense regions are feeding material into the denser regions, where fields play a key role in the star formation rate by impeding the birth of new stars.

FIELDMAPS used the HAWC+ polarimeter aboard SOFIA, which determines the alignment of dust, allowing astrophysicists to sense the direction of the magnetic field so it can be observed from afar. This enabled the largest and most detailed maps ever made of magnetic fields across galactic bones.

The group has more galactic bones to analyze, which they plan to compare with computer simulations of spiral galaxies. Together, these results will help develop a more thorough description of the role of magnetic fields in spiral galaxies’ arms.