Washington DC—November 11, 2022. Black holes potentially have an even larger influence on the galaxies around them than we thought. And the Stratospheric Observatory for Infrared Astronomy (SOFIA) provided a new way to look at their impact.

Researchers used SOFIA to measure the magnetic fields of nine active galactic nuclei to study the origin of their radio loudness (brightness). They found that with the help of magnetic fields, black holes can work through larger distances and have a larger influence on their galaxy than previously thought.  The findings have been submitted to The Astrophysical Journal. 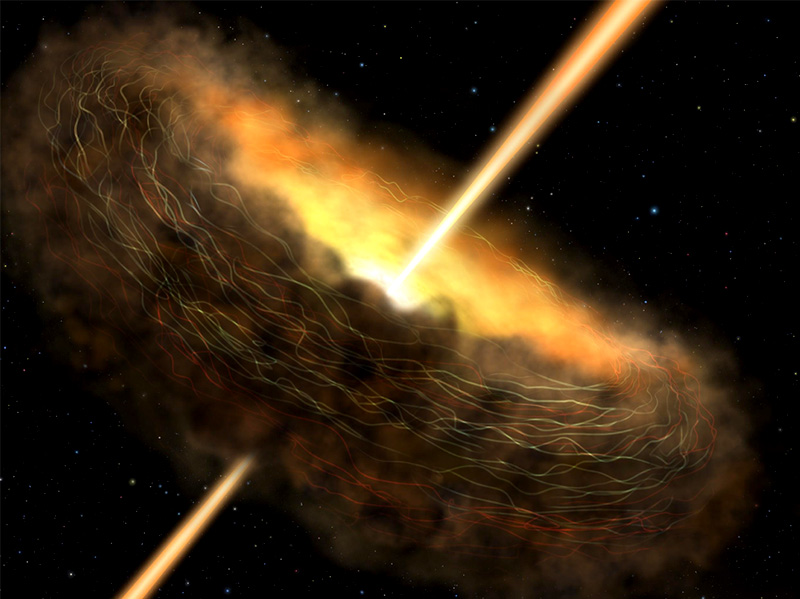 Artist’s conception of Cygnus A, surrounded by the torus of dust and debris with jets launching from its center. Magnetic fields are illustrated trapping dust near the supermassive black hole at the galaxy’s core. This initial study motivated the larger comparison of radio loudness to polarization and was included in the composite data set. Credit: NASA/SOFIA/Lynette Cook

Active galactic nuclei (AGN) — the central region of a galaxy, which houses its supermassive black hole — are classified by how strong of a jet they produce, shooting matter away at near light speed. Since the jets are mostly visible at radio wavelengths, they are described as either radio loud or radio quiet.

“We see that some AGN have very powerful radio jets and some don’t, even though all AGN are intrinsically the same — they all have a supermassive black hole in the center and accrete mass,” said Enrique Lopez-Rodriguez, a research scientist at Stanford University’s Kavli Institute for Particle Astrophysics and Cosmology and lead author on the new SOFIA finding. “We don’t understand why some of them are so powerful, and some of them are not.”

Now, using SOFIA, Lopez-Rodriguez and his team have found that the polarization of infrared light from AGN also increases with their radio loudness, providing a new way to study black hole characteristics.

Motivated by the 2018 SOFIA discovery that the infrared light from the strongest known radio-loud AGN, Cygnus A, was highly polarized, the researchers developed a follow-up observation program with SOFIA to determine whether there’s a relationship between infrared polarization and radio loudness, and if so, why. They looked at the magnetic fields of a total of nine AGN, four of them radio loud and five radio quiet.

From SOFIA observations of light polarization, astronomers can deduce the structure of the magnetic field in the region. In the AGN sample Lopez-Rodriquez and his team studied, these polarizations show that in radio-loud AGN — AGN with strong jets — there’s a donut-shaped magnetic field perpendicular to the jets, along the equator of the AGN. That only radio-loud AGN have such a strong toroidal magnetic field indicates that the field is helping to transfer energy inward, feeding the black hole with matter coming from the host galaxy. The stronger the jets, the stronger the magnetic field, and the more energy there is in the system.

The researchers were surprised by the strength of the result. “We were hoping for it, but we weren’t expecting such a nice correlation,” Lopez-Rodriguez said. “There’s so much physics behind it that we don’t understand, and future hydromagnetic models are required.”

Though a lot of science behind these objects remains unexplained, the result implies that black holes are potentially affecting galaxy evolution and jet production quite a bit more than astronomers previously realized. While astronomers typically consider gravity as the only force influencing supermassive black holes, this work shows that magnetic fields can aid in bridging the interface between black holes and matter in their host galaxy. With the help of these magnetic fields, black holes can impact not only the matter immediately around them, but can also work at even larger distances within the galaxy.

The aircraft was maintained and operated by NASA’s Armstrong Flight Research Center Building 703, in Palmdale, California. SOFIA achieved full operational capability in 2014 and concluded its final science flight on Sept. 29, 2022.

Founded in 1969, under the auspices of the National Academy of Sciences at the request of the U.S. Government, the Universities Space Research Association (USRA) is a nonprofit corporation chartered to advance space-related science, technology and engineering. USRA operates scientific institutes and facilities and conducts other major research and educational programs. USRA engages the university community and employs in-house scientific leadership, innovative research and development, and project management expertise.