Mountain View, CA and Columbia, MD—June 2, 2020. Observations from Stratospheric Observatory for Infrared Astronomy (SOFIA)  indicate that the magnetic field near our galaxy’s core is strong enough to control the material moving around the black hole, even in the presence of the black hole’s enormous gravitational forces. 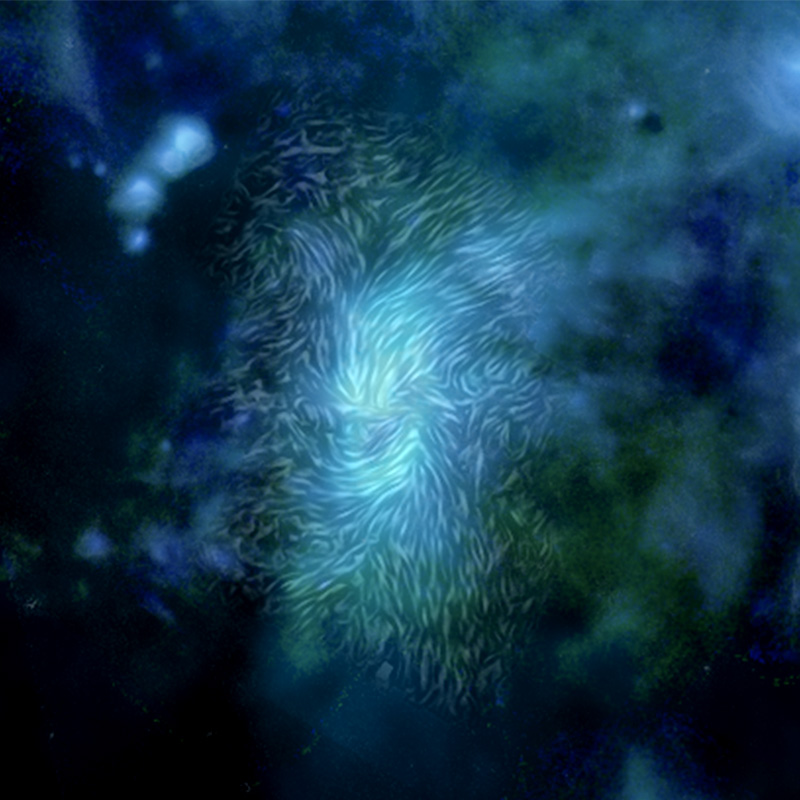 A composite image of the central region of our Milky Way galaxy, known as Sagittarius A. SOFIA found that magnetic fields, shown as streamlines, are strong enough to control the material moving around the black hole, even in the presence of enormous gravitational forces. Image credit: NASA/SOFIA/L. Proudfit, ESA /Herschel/Hubble Space Telescope.

The research, presented today at a meeting of the American Astronomical Society, could help answer longstanding mysteries about why our black hole is relatively quiet compared to others, and why the formation of new stars in our galaxy’s core is lower than expected.

Using its newest infrared instrument to study celestial dust grains, which align perpendicular to magnetic field lines, SOFIA was able to produce detailed maps of our galactic center, showing the behavior of these otherwise invisible magnetic fields around the black hole.

“There are still aspects of our galaxy’s black hole that we can’t explain with gravity alone,” said Joan Schmelz, director at the Universities Space Research Association, in Columbia, MD, and SOFIA senior science advisor. “Magnetic fields may be able to help solve these mysteries.”

Scientists have often relied on gravity to explain their results because measuring celestial magnetic fields is extremely challenging. But the data from SOFIA now compel scientists to consider their role. We know that magnetic fields in the Earth’s magnetosphere protect us from high-energy particles coming from the Sun. They also control the plasma of the solar atmosphere, called the corona, where they create dramatic loops and powerful flares. SOFIA found that the magnetic field near the galactic center may be strong enough to control matter in way similar to the solar corona.

More reseeach is needed to understand magnetic fields' role at the center of our galaxy and how these strong forces fit in with gravity. However, these preliminary results can enhance our understanding of at least two long-standing, fundamental questions about star formation and black hole activity in our galactic center region. Even though there’s plenty of raw material to form stars, the star formation rate is significantly lower than expected. Additionally, our black hole is relatively quiet compared to those at the centers of many other galaxies. The strong magnetic field could explain both — it could keep the black hole from swallowing the matter it needs to form jets and also suppress the birth of stars.

Studying magnetic fields in the far reaches of the galaxy and beyond requires remote observations by telescopes like SOFIA. Flying at an altitude of 45,000 feet, above 99% of the Earth’s water vapor, SOFIA is able to capture a unique view of the infrared universe, while landing after each flight so that it can be upgraded with the latest technology. For this result, SOFIA used the High-resolution Airborne Wideband Camera-Plus, or HAWC+ instrument, which was built at NASA’s Jet Propulsion Laboratory in Pasadena, California, to study magnetic fields.

“The data provide the most detailed look yet at the magnetic fields surrounding our galaxy’s central black hole,” said David Chuss, a coauthor of the paper at Villanova University in Pennsylvania. “The HAWC+ instrument has improved the resolution by a factor of 10 and increased the sensitivity, which represent a revolutionary step forward.”

Adapted from the Press Release from the AAS Press Conference, June 2, 2020.