Columbia, MD and Pasadena, CA—June 13, 2022. Hidden Behind a dark band of dust known as the Great Rift, the Cygnus-X star formation region is more than a bit of a mystery. Astronomers haven't quite figured out what the molecular clouds in Cygnus-X are doing, and why, but observations from the Stratospheric Observatory for Infrared Astronomy (SOFIA) may help. 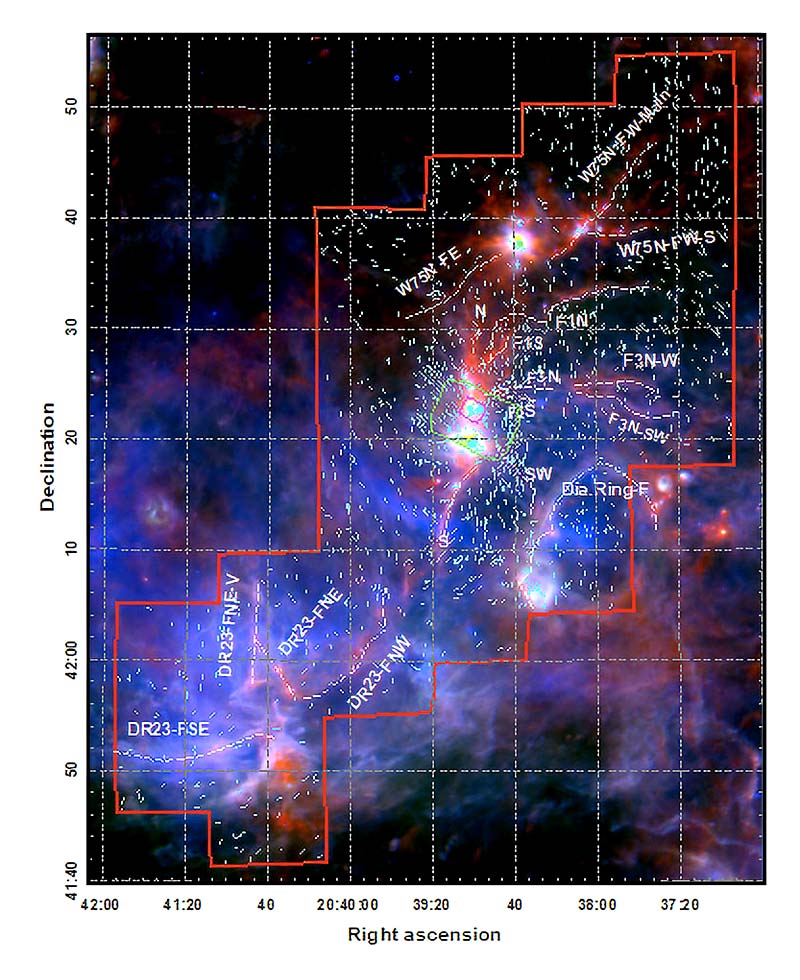 These mysteries relate to the fact that Cygnus-X is a difficult region to study. Two of its clouds – DR21 and W75N – clearly have separate gas velocities, but which cloud is in front of the other, and whether or not the two clouds are colliding, are open questions. Dan Clemens, an astronomer at Boston University, is the principal investigator on a project using SOFIA to examine Cygnus-X and the effects of magnetic fields on its clouds and cloud filaments. Details of these studies were presented at the June 2022 meeting of the American Astronomical Society in Pasadena, California.

“You can think of it as a pasta bowl with all these threads going in,” said Clemens. “Which pasta is in front of which pasta? Are there separate piles of pasta, or are they interacting piles of pasta that cause stars to form?”

Using SOFIA’s High-resolution Airborne Wideband Camera Plus (HAWC+), Clemens and his team zoomed in on Cygnus-X to look at the polarizations of the filaments at far-infrared wavelengths. These polarization carry information about the directions of the small-scale magnetic fields in the region, which the researchers use to determine the role of the magnetic fields.

“We want to ascertain the nature of the magnetic fields along these filaments, where they begin, and where they end,” Clemens said. “This will help test our best star formation models and notions.”

According to the team’s analysis, there appear to be four distinct layers of gas and dust between us and the northern region of Cygnus-X. Whether or not these layers are interacting will affect their understanding of SOFIA’s magnetic field data. As such, Clemens and his collaborators will need to determine which cloud is in front of the other, and if they are going to collide, before the SOFIA data – and supporting wider-field, ground-based, near-infrared data – describing the magnetic fields can be effectively interpreted.

About SOFIA
SOFIA is a joint project of NASA and the German Space Agency at DLR. DLR provides the telescope, scheduled aircraft maintenance, and other support for the mission. NASA’s Ames Research Center in California’s Silicon Valley manages the SOFIA program, science, and mission operations in cooperation with the Universities Space Research Association, headquartered in Columbia, Maryland, and the German SOFIA Institute at the University of Stuttgart. The aircraft is maintained and operated by NASA’s Armstrong Flight Research Center Building 703, in Palmdale, California.

SOFIA achieved full operational capability in 2014, and the mission will conclude no later than Sept. 30, 2022. SOFIA will continue its regular operations until then, including science flights and a deployment to New Zealand this summer.

About Boston University
Founded in 1839, Boston University is an internationally recognized institution of higher education and research. With more than 34,000 students, it is the fourth-largest independent university in the United States. BU consists of 17 schools and colleges, along with the Faculty of Computing & Data Sciences and a number of multi-disciplinary centers and institutes integral to the University’s research and teaching mission. In 2012, BU joined the Association of American Universities (AAU), a consortium of 65 leading research universities in the United States and Canada.

About Perkins Telescope
Boston University owns and operates the 1.8m Perkins Telescope Observatory in northern Arizona that was used to collect the near-infrared polarization data. The study is supported by USRA/SOFIA and NSF (18-14531-Clemens and 20-09842-Pillai).

About USRA
Founded in 1969, under the auspices of the National Academy of Sciences at the request of the U.S. Government, the Universities Space Research Association (USRA) is a nonprofit corporation chartered to advance space-related science, technology, and engineering.  USRA operates scientific institutes and facilities, and conducts other major research and educational programs. USRA engages the university community and employs in-house scientific leadership, innovative research and development, and project management expertise. More information about USRA is available at www.usra.edu.