Columbia, MD and Mountain View CA --January 14, 2021. Not all appears as it would seem in the Whirlpool galaxy. One of the best-studied spiral galaxies and a delight to amateur astronomers, Messier 51, as it’s officially named, is influenced by powerful, invisible forces. 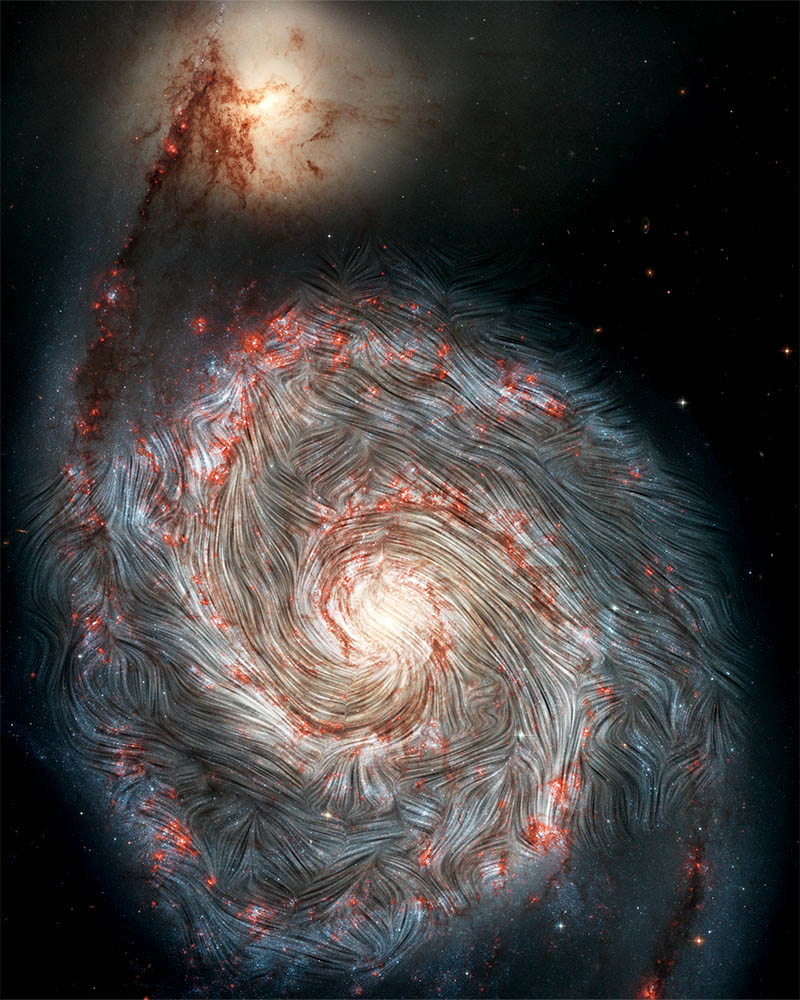 Magnetic field streamlines detected by SOFIA are shown over an image of the Whirlpool galaxy, M51, from NASA’s Hubble Space Telescope. For the first time, SOFIA’s infrared view shows that the magnetic fields in the outer arms do not follow the galaxy's spiral shape and are instead distorted. The intense star formation activity in theses regions, shown in red, may be causing the chaos, along with the forces from neighboring galaxy, NGC 5195, tugging on one of the spiral arms. Credit: NASA, the SOFIA science team, A. Borlaff; NASA, ESA, S. Beckwith (STScI) and the Hubble Heritage Team (STScI/AURA)

Located 31 million light-years away in the constellation Canes Venatici, the galaxy’s arms are strikingly visible as they reach out along the central spine structure displaying swirling clouds of gas and dust are massive star-making factories. But new observations by NASA’s Stratospheric Observatory for Infrared Astronomy, or SOFIA, presented at this week’s 237th meeting of the American Astronomical Society, shows a more complicated picture. The lead author of the study on an upcoming paper is Alejandro Borlaff, Postdoctoral Fellow at NASA Ames Research Center, and USRA scientist Enrique Lopez- Rodriguez (based at Ames Research Center) is a co-author on the upcoming paper.

Radio telescopes previously detected neatly-drawn magnetic fields throughout the length of the galaxy’s massive arms. But under SOFIA’s infrared gaze for the first time those lines give way to a chaotic scene in the outer spiral arms. Using a far-infrared camera and imaging polarimeter instrument called the High-Resolution Airborne Wideband Camera, or HAWC+, researchers found that the magnetic fields in the outskirts of the galaxy no longer follow the spiral structure and are instead distorted.

What’s causing all this magnetic pandemonium? The intense star formation in these areas creates chaos that can only be seen with infrared flight. A nearby, yellowish galaxy called NGC 5195 tugging at the outermost tip of one of the arms adds to the turmoil, possibly strengthening the magnetic fields. The research builds on SOFIA’s previous findings that show magnetic fields are important in shaping spiral galaxies and helps unravel the complex role magnetic fields play in the evolution of galaxies.

Adapted from the NASA feature on NASA.gov