LIFTING THE VEIL ON STAR FORMATION IN THE ORION NEBULA

LIFTING THE VEIL ON STAR FORMATION IN THE ORION NEBULA

SOFIA discovered that the stellar wind from a newborn star in the Orion Nebula is preventing more stars from forming nearby.

Columbia, Maryland and Seattle, Washington. January 9, 2019  The stellar wind from a newborn star in the Orion Nebula is preventing more new stars from forming nearby, according to new research using NASA’s Stratospheric Observatory for Infrared Astronomy, SOFIA, whose science operations are managed by Universities Space Research Association. 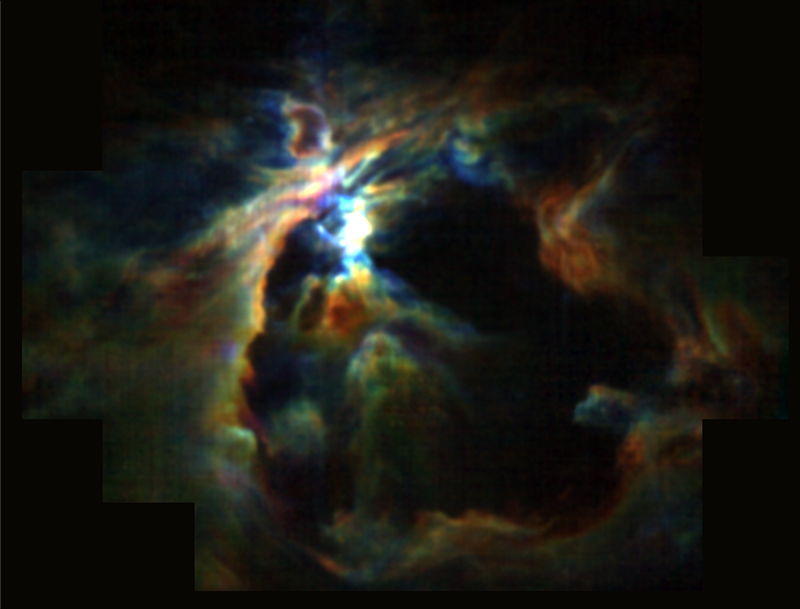 The powerful wind from the newly formed star at the heart of the Orion Nebula is creating the bubble (black) and preventing new stars from forming in its neighborhood. At the same time, the wind is pushing molecular gas (color) to the edges, creating a dense shell around the bubble where future generations of stars can form. Image credits: NASA/SOFIA/Pabst et. al

This is surprising because until now, scientists thought that other processes, such as exploding stars called supernovae, were largely responsible for regulating the formation of stars and creating bubbles--a process called "feedback."  But SOFIA’s observations suggest that infant stars generate stellar winds that can blow away the seed material required to form new stars.

The Orion Nebula is among the best observed and most photographed objects in the night sky. It is the closest stellar nursery to Earth and helps scientists explore how stars form. A veil of gas and dust makes this nebula extremely beautiful but also shrouds the entire process of star birth from view. Fortunately, infrared light can pierce through this cloudy veil, allowing specialized observatories like SOFIA to reveal many of the star-formation secrets that would otherwise remain hidden. At the heart of the nebula lies a small grouping of young, massive and luminous stars.

Observations from SOFIA’s instrument, the German Receiver for Astronomy at Terahertz Frequencies, known as GREAT, revealed, for the first time, that the strong stellar wind from the brightest of these baby stars, designated Theta^1 Orionis C, has swept up a large shell of material from the cloud where this star formed, like a snow plow clearing a street by pushing snow to the road’s edges.

“The wind is responsible for blowing an enormous bubble around the central stars,” explained Cornelia Pabst, a Ph.D. student at the University of Leiden in the Netherlands and the lead author on the paper, which is being published online today (7 January) in Nature [https://www.nature.com]. “It disrupts the natal cloud and prevents the birth of new stars.”

Researchers used the GREAT instrument on SOFIA to measure the spectral line -- which is like a chemical fingerprint -- of ionized carbon. Because of SOFIA’s airborne location, flying above 99 percent of the water vapor in the Earth’s atmosphere that blocks infrared light, researchers were able to study the physical properties of the stellar wind.

“Astronomers use GREAT like a police officer uses a radar gun,” explained Alexander Tielens, an astronomer at Leiden Observatory and a senior scientist on the paper who is presenting the findings at the 233rd meeting of the American Astronomical Society in Seattle, Washington [https://aas.org/meetings/aas233]. “The radar bounces off your car, and the signal tells the officer if you’re speeding.”

Similarly, astronomers use the ionized carbon’s spectral signature to determine the speed of the gas at all positions across the nebula and study the interactions between massive stars and the clouds where they were born. The signal is so strong that it reveals critical details and nuances of the stellar nurseries that are otherwise hidden. But this signal can only be detected with specialized instruments -- like GREAT -- that can study far-infrared light.

At the center of the Orion Nebula, the stellar wind from Theta^1 Ori C forms a bubble and disrupts star birth in its neighborhood. At the same time, it pushes molecular gas to the edges of the bubble, creating new regions of dense material where future stars might form.

These feedback effects regulate the physical conditions of the nebula, influence the star formation activity, and ultimately drive the evolution of the interstellar medium, the space between stars filled with gas and dust. Understanding how star formation interacts with the interstellar medium is key to understanding the origins of the stars we see today and those that may form in the future.