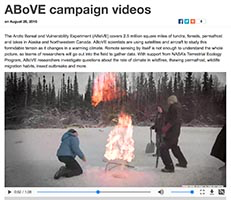 Congratulations to producers Jefferson Beck and David Ladd who won national recognition for the production of their videos. The awards were presented on April 24 at the annual Direct TV Working Group meeting hosted in conjunction with the National Association of Broadcasters convention in Las Vegas.

In the “Documentation” category, celebrating camera work and field production, Jefferson Beck, won two awards. He won the second place for work on the ABoVE campaign and third place for his work with Piers Sellers in Greenland.

And in the “Production” category honoring the end-to-end production, "Moon and More” took top honors with David Ladd as producer.